Ha-Seong Kim wowed Padres fans in 2021 with his talent all over the infield, but he could not hit well enough to earn an everyday spot.

With superstar shortstop Fernando Tatis Jr. out for the first two and a half months of the season, Kim is getting the opportunity to play like an everyday player in 2022.

The Korean infielder looks like a completely different player at the plate. After struggling to catch up to fastballs in 2021, Kim’s first four home runs of 2022 have all come against heaters. The right-handed hitter also dramatically increased his walk rate, helping him to the third-highest OPS+ on the Padres. Kim’s play has been so impressive that when Fernando Tatis Jr. comes back, could he be pushed into the outfield?

Most of what could force this move has come from Kim, but a few factors are outside of his control.

Wil Myers and Matt Beaty have gotten most of the starts in right field so far this season, and they’ve been dreadful. The two of them have combined to hit .168 this season, as right field has been arguably the Padres’ biggest weak spot offensively.

Fernando Tatis Jr. struggled mightily as a shortstop last season, leading the league in errors. His play in the outfield was much better as right field is easier to play than shortstop. Last year, 20 of his 24 starts as an outfielder came in right field. Kim’s already hitting better than either Myers or Beaty, so it makes more sense that they should lose their spot in the lineup and not Kim. The Korean star can also play at second base and third base, meaning that Tatis would still be able to get some time at shortstop while keeping Kim in the lineup. 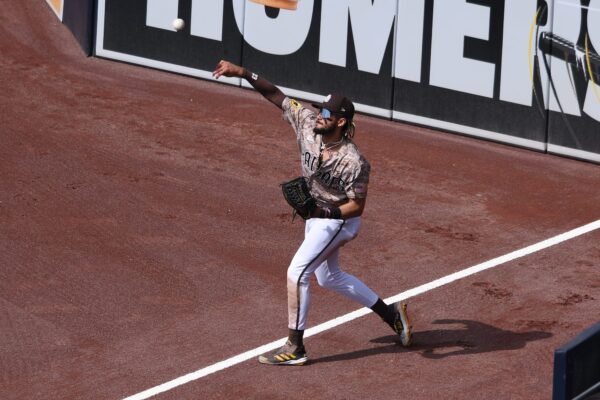 Finally, the addition of the universal designated hitter means that Tatis will have the opportunity to bat without needing to play in the field, giving even more opportunities to Kim.

The right-handed hitter has shown much more discipline this season. He’s walking in an incredibly impressive 13.7% of his plate appearances, which is having multiple effects. The most obvious is that his on-base percentage has skyrocketed. After posting a dismal .270 on-base percentage in 2021, he’s improved to .340 so far in 2022.

As Billy Beane famously said about Scott Hatteberg, “He gets on base.”

However, the benefit of being more disciplined means that Kim sees more pitches, giving him better pitches to hit eventually. The right-handed hitter is taking advantage of this, as his Barrel % puts him in the 79% percentile, a major reason why he’s getting more hits.

The combination of hitting the ball well and a high walk rate means great things for Kim’s OPS. After posting a .622 OPS that ranked substantially below league average in 2021, he’s jumped up to a .775 OPS that is above league average. Kim’s hitting ground balls just 30% of the time, which is great because ground balls have the lowest slugging percentage of any batted ball. The Padres infielder is also hitting line drives 26.7% of the time, which is another major advantage. Line drives have the highest batting average of any batted ball, which is a significant reason for Kim’s success.

Ha-Seong Kim recorded the seventh highest WAR on the 2021 Padres, mainly due to his extreme talent on defense. He posted a 2.1 defensive WAR, tying him for sixth best in baseball. Kim posted 18 defensive runs saved in just 573.2 innings, the most runs saved per inning of anyone with at least 400 innings played in 2021. If Kim had played every day, like he will be doing this year, the infielder would have been the best defender in baseball. Kim’s glove is not going to go anywhere, and his improvements at the plate have made him a must-have in any Padres lineup. Fernando Tatis Jr. could surely see time in the outfield in 2022.

Sam is a Senior in High School. He has been writing for three years, and started at EVT in June of 2021.
Tags: Fernando Tatis Jr., Ha-Seong Kim, Padres 2022, Padres MLB, San Diego Padres

Who do the Padres start in center field?

No offense, but there is NO WAY Tatis isn’t playing shortstop when he returns. It’s very simple – that is the position he wants to play and most importantly, he is the Padres generational, superstar player. Like it or not, you don’t “disturb” these types of players. You put them in the very best “mental” position to succeed. Because when these special players are in a good mental place and succeeding, everyone watching will see MVP-type of playing. It is what it is. This is how it works in the sports (and entertainment) world.

The Club should move Tatis to the OF and be done with this. Tatis is a bad defensive shortstop, and it leaves him more vulnerable to reinjuring his shoulder. With his arm he can play RF, then everyone else can fight for ABs in LF.