Christian Villanueva burst onto the scene earlier this season.

He was named April’s National League Rookie of the Month after posting a .321 average with eight homers and a 202 wRC+ in the first 23 games of the season through the end of April. East Village Times has done articles on why he could possibly be just the third Padres player ever to win Rookie of the Year.

All that hype that lasted through the first month of the season quickly evaporated to start the month of May. For the first two weeks of May, Villanueva, in 13 games, batted a dismal .091 with a 34.8 strikeout rate and an absurd -5 WRC+. Pitchers had figured him out. The figured if they threw a tough right hander out there against him, throwing less fastballs,  he would fail. For about two weeks, he did. To start the year, he hit .235 with a 109 wRC+ against righties. He hit a microscopic .034 with a -62 wRC+ against righties in those slumping 13 games to start May.

Obviously, Villanueva feasts on fastballs as he leads all rookies with 14 home runs, second only to Bryce Harper in the National League.

He saw fastballs 56.4% of the time in April and that dropped to 52.6% during his slump. He saw more sliders and curveballs during that time as well. He still is not seeing as many fastballs as he was to start the year but in the last 10 games, he has a 168 wRC+ against right handers and a 156 wRC+ overall, with a .235 average and four homers. The disparity in the high wRC+ and low average speaks to how little a batting average alone says about a hitter’s progress.

Some rookies burst onto the scene because no one has film or scouting reports on them and then, once pitchers obtain those things, they flame out quickly. It looked as if Villanueva was trending that direction until these last two weeks. Pitchers were not very careful to Villanueva to start the season, as shown in the heat map below of pitches by location throw to Villanueva from March 31 to April 30, when he hit .321. 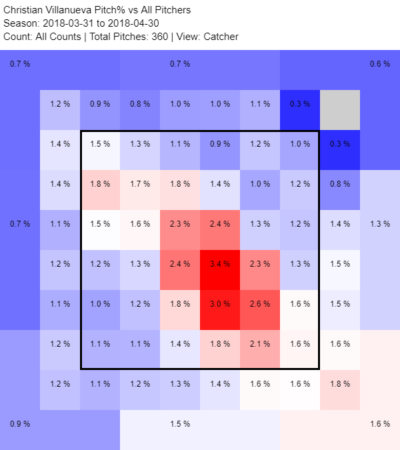 Pitchers didn’t seem to care about grooving pitches in Villanueva’s sweet spot, towards the lower part of the middle of the strike zone. The pitchers wised up from May 1 to May 15, as they spread pitches all over the zone, hence the slump of an .091 average. 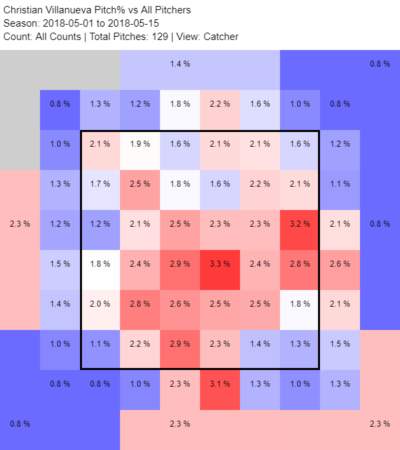 They started to pitch Villanueva more inside and up above the zone. During his recent hot streak, the pitches still have come in all over the map and even moreso inside. Yet, Villanueva has adjusted and has been able to turn on more pitches inside for hits instead of waiting and hoping for mistakes out over the middle or outside of the zone. 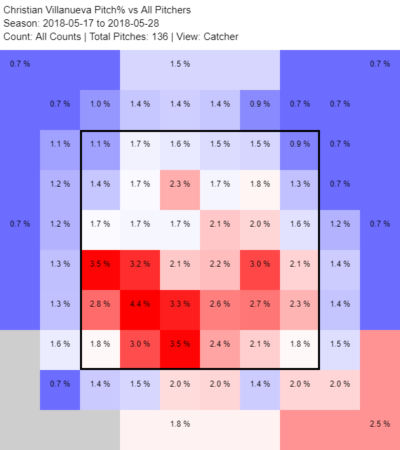 They are coming inside more yet his numbers have been almost as good as his first month, with that 156 wRC+ and four homers. This is an encouraging sign. He is also back to hitting right handers well. These past 10 games have been more a result of Villanueva’s adjustments than the pitchers making the same mistakes they made in April.

He is still getting less fastballs and more breaking balls than he did during his hot April yet he has continued to hit. After a dreadful start to May and a hot 10 days, his month-long numbers are starting to even out. He probably won’t win Rookie of the Month again but there is no denying that he has made adjustments.

Here is another summary of his season split into those three sections: his Rookie of the Month award, his two-week slump and his recent resurgence.

Baseball is about adjusting to the adjustments. Pitchers are no dummies and once they find a hole in your swing, they will exploit it over and over. Villanueva certainly has weaknesses but as you can see, he has adjusted back and is starting to climb back out of that hole he dug to start the month.

Villanueva certainly deserves to be on the short list, if not the favorite, of those who would win the Rookie of the Year if the season ended today. In any case, it’s good to see Villanueva adjusting back and not being a one-month wonder.

Native of Escondido, CA. Lived in San Diego area for 20 years. Padres fan since childhood (mid-90s). I have been writing since 2014. I currently live near Seattle, WA and am married to a Seattle sports girl. I wore #19 on my high school baseball team for Tony Gwynn. I am a stats and sports history nerd. I attended BYU on the Idaho campus. I also love Star Wars.
Tags: Bryce Harper, Christian Villanueva, MLB, National League, Padres, Rookie of the Year, San Diego Padres