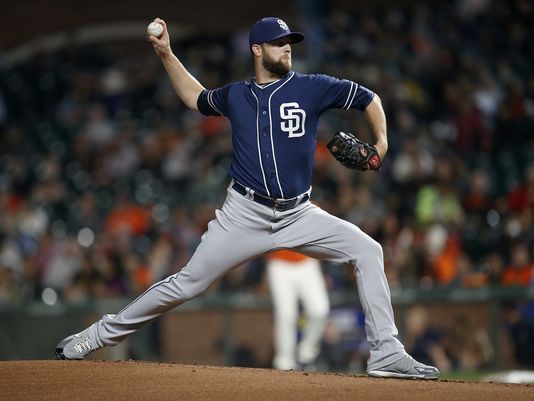 When the Padres reached a deal with Jordan Lyles for $750,000 in December, they still were not quite sure what they had.

At the time, the thought was he would be given an opportunity to go out and make the rotation. That didn’t last past the middle of March.

The Padres moved the former first-round pick into the bullpen and the early returns have paid out huge.

Darren Balsley is no stranger to reclamation projects, most recently, his work with Brad Hand is known league wide, as he has become one of the best relief pitchers in the game. The ability of Balsley to turn coal into diamonds has become a yearly occurrence and Lyles appears to be this year’s treasure.

The stuff has always been there. In his first major league start as a Houston Astro, Lyles went seven innings, allowing five hits and two earned runs while striking out four. He has shown flashes of brilliance, averaging 8.3 strikeouts and just 2.61 walks per nine innings in nine minor league seasons, but it has never translated to the Major Leagues. The amazing thing is, it isn’t for lack of velocity.

As it shows above, year-by-year the velocity continues to go up. Except for one outlier with his slider in 2016, the trend for him ticks up year-by-year, so to say that his tremendous start to the year is due to higher velocity doesn’t exactly tell the tale.

The more telling statistic is a simple pitch selection adjustment. In 2017, Lyles threw his changeup 4.4% of the time. This year, he has been throwing the pitch at a much higher rate, 24.6%. At the same time, Lyles has thrown his slider much less, going down from 21.4% last year to 6.8% this year. This tiny change has led to impressive results for both pitches. The increase with the changeup has led to a swing-and-miss rate of 17.24%, while the the decrease with the slider has led to an increase of 25.00% from 9.97% in 2017.

The pitch selection, combined with Lyles throwing more strikes this year (62.3% this year vs. 60.7% in 2017), is allowing for people to be set up for off-speed offerings out of the zone, making his changeup, slider, and curveball all the more effective.

Jordan Lyles with a beautiful changeup to take down Nolan Arenado pic.twitter.com/UGe33c5cCw

Not too many people make Nolan Arenado look like this, but Lyles succeeds here with his new weapon, the changeup. After working ahead, he is able to locate this nicely, fooling one of the best hitters in the game.

Doing some homework on Jordan Lyles, here’s him striking out Fisher with a nice Curve. pic.twitter.com/mipObvJ3bh

You see the same thing with Fisher in this video. Lyles works ahead and then throws a perfectly placed curveball to finish off the young Astro!

And a nice sequence against Jett Bandy last week. pic.twitter.com/2xaDH51TZI

This might be one of the best sequences from Lyles this year against Milwaukee’s catcher, Jett Bandy. As you can see, he starts the hitter with a curveball for a strike and then goes right in with a two-seamer that just missed off the plate. He goes right back to the two-seam fastball in a better location to get ahead of the hitter, and after bouncing a curveball, he changes strategy and goes to his new-found pitch, the changeup, to finish the job. 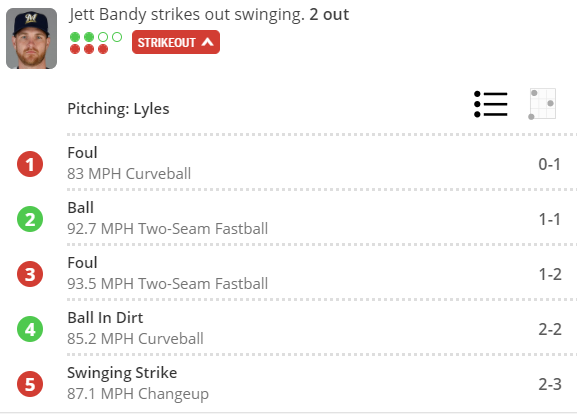 We have seen Darren Balsley do this in the past; for Brad Hand it was utilizing his slider. For Lyles, could it be something as simple as throwing the changeup more often? Time will tell, but for now, the results seem to think so.

Since he was a little kid he wanted to be one of those guys at the game who had the headset on, listening to the Colonel and Uncle Teddy, he has grown out of that, but the love is still there. Padres' coverage will be biased at times, but mostly an honest dissection of the team he loves.
Tags: Brad Hand, Darren Balsley, Jordan Lyles, MLB, San Diego Padres

5 thoughts on “Can the Changeup Save Padres’ Pitcher Jordan Lyles?”

Padres acquire Jorge Mateo from Oakland in exchange for a PTBNL

The impacts of a 60-game season for the Padres

Since he was a little kid he wanted to be one of those guys at the game who had the headset on, listening to the Colonel and Uncle Teddy, he has grown out of that, but the love is still there. Padres' coverage will be biased at times, but mostly an honest dissection of the team he loves.