The countdown to kickoff for Aztec football is underway, and I can’t think of a season with greater anticipation for me than the one that lies ahead. That covers nearly seven decades since my first one, and the enthusiasm comes from a myriad of reasons!

Pre-season speculation about the team, or for that matter, any team in any sport anywhere around the globe is universal, but it is rare for the excitement to include moving into a new venue.

After seeing the Aztecs play home games in Aztec Bowl primarily, and in Balboa Stadium when extra capacity was needed, home games took on new meaning when they moved into San Diego Stadium as one of three tenants in 1967.

Thanks to some courageous forward thinking as rare as polar bears on Montezuma Mesa, their old home has been demolished and ground into recycled construction rubble to serve as a base spread across the 166-acre footprint of SDSU West, and a snappy new stadium called Snapdragon.

If you’re among those grumbling about the name, and if the past is a prelude, be patient. The state-of-the-art multi-purpose venue that opened as San Diego Stadium in 1967 begat Jack Murphy Stadium in 1981, Qualcomm in 1997, and San Diego County Credit Union Stadium in 2017. That’s four name changes in 50 years or an average of one every 12.5 years. To date, no one at Qualcomm has heeded my suggestion to name their next operating system after Snapdragon something catchy like Aztec, or cool and thought-provoking like Montezuma’s Revenge.

Setting temporary stadium names aside, I’d be delighted if the Aztecs of today match the Aztecs of yore after moving into their new digs. That first season they went 10-1 overall, 5-0 and first place in the CCAA. Their only blemish appeared in the last game of the regular season to an electrifying player by the name of Altie Taylor who wore the uniform of Utah State.

That was in fact the only loss incurred at home or otherwise over three years as the Aztecs compiled a record of 30-1-1. I’d even be willing to accept a reprise of their record from 1967 thru 1977 when SDSU won 100 games against 17 losses and a pair of ties. During that period they won six conference championships and it would have been more, except for three seasons as an independent.

One of my favorite pre-season events to whet the appetite for Aztec football was the annual Red and Black game that pitted a team ready to start the season in a tune-up against an alumni team rumored to have undergone rigorous training at Bully’s East, and included any number of Aztecs playing in the NFL. The games rarely lived up to their billing. The pros rarely showed up, if ever, and Don Coryell (thru 1972) and Claude Gilbert were loathed to show too much, lest spies from Long Beach State be in attendance. As for the alumni, it seemed that by halftime most were thinking about the post-game party.

One exception was a feisty player by the name of Dick Morris who played pre-Coryell from 1958-60. He was a regular returnee for the alumni over a number of years, including one where I could swear his name was called more often by the public address announcer than anyone else on the field. I had the feeling Coryell wished Morris had some eligibility left. 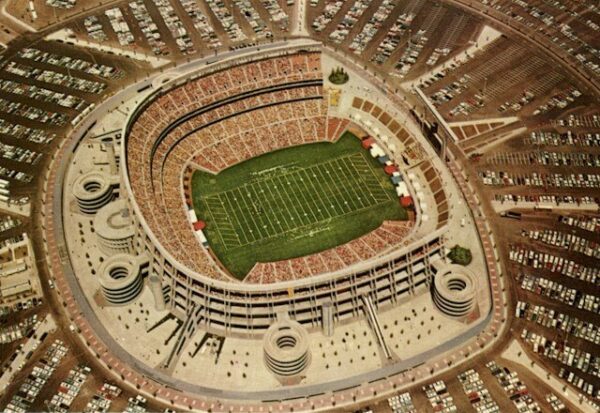 There was one Red and Black game that will always stand out as the most touching for me and it came in 1981 in the newly-named Jack Murphy Stadium. Despite going 62-26-2 over nine seasons against an upgraded schedule that included signature wins over Oregon State twice, Iowa State twice, Arizona twice, Wisconsin, and Florida State, Gilbert’s 1980 team fell to 4-8 for only the second losing season in his career as the Aztecs head coach after replacing Coryell nine years earlier.

Mary Alice Hill, who was the first in a line of athletic directors of questionable judgment and merit, canned Gilbert. Fans and players were upset and Coryell, then the Chargers head coach, was famously outraged to the point of tears.

Scovil’s first action was in the aforementioned Red and Black game, and his first squad soundly defeated the Alumni team, followed by a scene I will never forget. Dirty, sweaty and beaten, but classy, the former players crossed the field as a group and hoisted Scovil onto their shoulders. It was a brief march that showed they were willing and able to accept the new coach, despite their love and respect for the man he replaced.

Scovil and his teams were never again as high as the shoulders of the Alumni team, posting a disappointing 24-32-3 record over five seasons. The Scovil era marked the beginning of the Aztecs’ fall from grace, a tumble that grew deeper from there with a cumulative record of 142-180-6, spanning 28 seasons and six coaching regimes.

Denny Stolz went 16-19 in three seasons, but with Scovil’s players, got the Aztecs to their only Holiday Bowl. Al Luginbill had a record of 31-25-3 before Ted Tollner went 43-48 in eight seasons followed by Tom Craft’s record of 20-29 over four seasons. Chuck Long completed the Dark Ages of Aztec Football with a record of 9-27 in three hapless seasons.

Dawn arrived in 2009 with the arrival of Brady Hoke, who doubled the two wins in Chuck Long’s final season. By 2010 the transformation was well underway as over the next 12 seasons, Hoke, Rocky Long and then Hoke again guided the Aztecs without a single losing campaign.

Last season, the 2021 edition set a school record with an even dozen wins in a 12-2 season, with every game played no closer than 112 miles from campus. The fact the Aztecs played two seasons without a true home game is a testament to the grit and resilience Hoke and his staff instill in their teams.

Is it any wonder that so many of us can’t wait for the kickoff on September 3, against Arizona, and our first real home game since 2019?

– If you’re like me you’ve enjoyed the in-depth coverage and grades assigned for every position group following careful scrutiny by Paul and Andre. By the end of the season, we’ll be able to assign their grades as evaluators…

– Kind of excited for the scrimmage and soft opening coming up on August 20. It is described as a tune-up to ensure all stadium systems are ready for the opener. I know the seats and views will be nicer, the video boards vastly improved and the speaker system so much better, it might be possible to hear clearly what is coming out of them. Here’s hoping the new system comes with volume control and they turn things down a bit. I know a few long-time fans who have given up their season tickets and a few more on the verge of doing so because of the senseless max volume screaming and hyping directed primarily at the student section, even when it empties after halftime in favor of campus parties and of course studying for that Quantum Physics exam, which is part of Physics Class 610A at SDSU for anyone keeping track at home…

– Until the temporary move to Carson, SDSU brought in free carnival rides for entertainment in the belief they could curtail student drinking before games. Based on my view from nearby Brown’s Corner, the move was a costly flop for all but a few little kids, although I did hear a few students puked after beer and a ride on the Tilt-A-Whirl…

– We have a recent history of outstanding teams to go with a new stadium, so if it was up to me, I’d can the unrelated attractions and focus on football. One exception is the Warrior Walk first instituted by Hoke. It was always great to see the staff and players as well as the band, drum corps, cheerleaders and dance team cheered by family, friends, and fans along the route…

Jim Brown welcomes your suggestions and tips. Jim promises to reply to all comments and can be reached by email at Sportnlyf@aol.com.

Jim has a long history in San Diego and is a rare native. A graduate of SDSU, but before the U was added, his first by-line appeared in the San Diego Union’s Sports Section in September of 1963, when he was the 16-year-old Sports Editor of The Russ, San Diego High’s school newspaper. He began writing outdoors features for the Evening Tribune in the 1970s and served as The Tribune’s outdoor writer from 1980 until its merger with the San Diego Union in 1990. As a freelancer, his outdoor stories have appeared in regional as well as national publications over many years. As an adjunct professor at SDSU and the former United States International University, he has taught a wide range of courses in the field of recreation.
Tags: Aztecs, SDSU, Snapdragon Stadium