The San Diego State Aztecs (1-1) continue their three-game homestand against the No. 23 Arizona State Sun Devils.

They enter this game with some unfamiliarity. The unfamiliarity will be a different quarterback taking snaps. Senior quarterback Christian Chapman suffered a knee injury during the second quarter of last week’s game against Sacramento State.

Junior backup quarterback Ryan Agnew entered the game and led the Aztecs to a 28-14 win.

Chapman was credited with his 24th win as a starting quarterback, making him the winningest starting quarterback in program history. Reasons to celebrate that milestone were dampened by news that Chapman could miss 3-6 weeks with an MCL sprain in his left knee.

Agnew entered the game in the second quarter and went 11-for-17 for 159 yards with two interceptions. San Diego State led the Hornets 13-7 at halftime, but fell behind 14-13 in the fourth quarter. The Aztecs rallied in the fourth quarter, scoring 15 unanswered points to win 28-14.

Agnew will make his first career start against the Sun Devils from the Pac-12. Arizona State enters the game ranked No. 23 after their 16-13 upset over the No. 25 Michigan State Spartans, last week at Sun Devil Stadium in Tempe, Arizona. Arizona State kicker Brandon Ruiz made a 28-yard field goal as time expired to seal the win.

The Sun Devils are coached by Herm Edwards. The head coach once roamed the visitor sideline at San Diego County Credit Union Stadium as the head coach of the Kansas City Chiefs. This is his first time as a head coach opposing the Aztecs, but he isn’t unfamiliar with the program. He played for San Diego State in 1976, and later graduated from the university.

Leading the Arizona State offense will be senior quarterback Manny Wilkins. The Sun Devils quarterback threw for 380 yards with a touchdown and an interception, and led his team back from 10 points down against Michigan State to a win. Arizona State score 13 unanswered points in the third quarter to win 16-13. Wilkins led the team into field goal range to set up the game-winner for Ruiz.

Wilkins spread the ball around quite a bit in Arizona State’s win. He completed passes to eight different players, and three players finished with at least six receptions. Junior wide receiver Kyle Williams was the leading receiver with seven catches for 104 yards. Williams is a small target, 5-foot-11, but found ways to get open and get catches.

San Diego State will be without defensive tackle Noble Hall. He suffered an arm injury and is expected to miss significant time this season. The Sun Devils didn’t have much success with their running game against Michigan State. Their passing game looks to be their strength, but they don’t be surprised if they try to exploit any weaknesses on the Aztecs’ defensive line with Hall not in the game.

Leading the Aztecs offensively this season has been Juwan Washington. He rushed for 156 yards and three touchdowns against Sacramento State, and is the third player in program history to open a season with back-to-back 150-yard performances. Marshall Faulk (1992) and Rashaad Penny (2017) are the other two players. 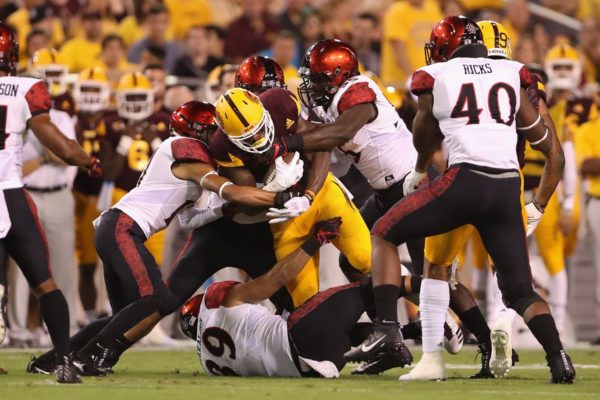 Washington will have a target on his back with an inexperienced quarterback under center. Taking away the running game will be the priority for the Sun Devils, as they will want to force the Aztecs to try to win with the passing game.

San Diego State won the first half of this home-and-home series last season in Tempe, taking the game 30-20. The goal is to finish with a sweep and leave the Sun Devils waiting for their next meeting in 2027.

Expect Juwan Washington to continue to pick up yards in this one.

However, not having an experienced quarterback leading the helm presents a giant question mark for San Diego State. As long as the Aztecs defense can keep Wilkins contained, the home team has a chance. If they allow Wilkins to get comfortable, it could be a long night.

This game should be close, but it’s hard to see San Diego State upsetting a ranked team from a Power-5 conference with a new starter taking the snaps. Arizona State walks out of SDCCU Stadium after winning a close game.

Mike is the sports editor for the Fayette Advertiser, and has been with East Village Times since 2015. His work has appeared on Bleacher Report. He is an avid Padres fan who is keeping the faith and trusting the process.
Tags: Aztecs Football, Aztecs vs Sun Devils, SDSU Football, SDSU vs ASU