The Aztecs’ hiring of Brady Hoke was one of 22 coaching changes in the FBS last season.

Among those schools, only seven went on to have a winning record in 2020, four finished .500, ten had losing seasons, and one, Old Dominion, did not play at all. 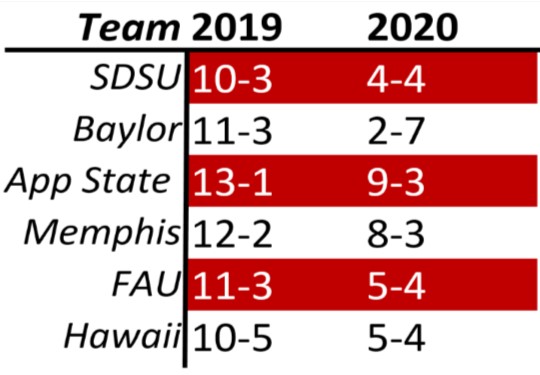 The situations which caused the coaching changes at the 22 universities were not the same. On the left are programs, who, like SDSU, replaced their head coach following a dominant year in 2019. Comparing these teams to the Aztecs puts SDSU’s 2020 season in its proper context. None of the new coaches improved their new team’s record. SDSU’s play on the field was on par with what happened at these other institutions.

Offensively, SDSU was the only school to improve upon its scoring output from 2019. While it is unsurprising to see the Aztecs improve from their low level two seasons ago, it is telling that no other school on the list raised their scoring total in 2020. At the opening press conference to announce Spring camp, coach Hoke said the offense was impacted the most from the lost practice time due to the protocols put in place to fight the spread of Covid-19. SDSU, though, was not the only place where that was true. 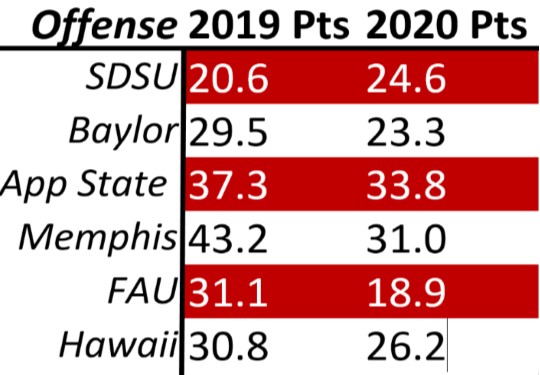 “One thing we didn’t have was a complete Spring ball.” SDSU offensive coordinator Jeff Hacklinski said this past week. “We didn’t have a complete summer. You got to remember. We didn’t touch a ball until nine days before we played UNLV. We were still in protocols that kept us in illegal formations – we were spaced at five yards – until nine days before we played UNLV.”

“There’s a whole (learning) curve to this. Number one, there are no excuses. We have to make it right, and we have to make it right for the players, as coaches. Number two, I think being in a normal process and being in normal procedures (this year),…you’re going to see a huge difference in our throwing the football, how we throw the football, and getting (the skill position players) into a position to make plays.”

A good case study to show the impact the lack of practice had on the team in how Jordan Byrd was used last season. Byrd is one of the most explosive players in the country.  He has rushing touchdowns of 72, 56, 73, and 51 yards, plus a 93-yard kickoff return.

Hecklinski’s stated goal coming into last season was to utilize Byrd’s big-play ability by finding creative ways to get him the ball in space. At the beginning of the year, Byrd lined up in the backfield and in the slot. Still, as time went on, Hecklinski had to dial back this approach to focus on the fundamental aspects of the offense, which in normal seasons would have been solidified long before fall camp.

As dynamic as Byrd is, he is, at best, the fourth option in the passing game behind Jesse Matthews, Daniel Bellinger, and Kobe Smith. While Matthews was a consistent threat throughout the year, Smith only had 13 receptions in seven games, and Bellinger did not grow into a focal point of the offense until the last half of the season. A bigger role for Byrd is built upon the team’s success at running the basics of the offense. Practice time last season could not be dedicated to special packages for Byrd because the Aztecs had not mastered the foundations of Hecklinski’s offense. 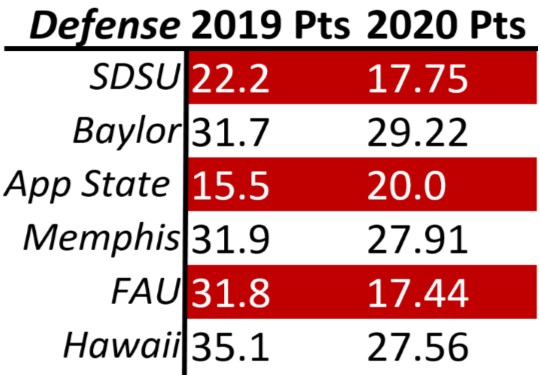 “As our quarterbacks grow, (Byrd’s) role will continue to grow,” Hecklinski said. “He lined up from numbers to numbers and everywhere in between today (at Spring practice), and we moved him all over the place. (Byrd) and Kaegan Williams have got to be two guys we do that with. Then, having Greg Bell in the game and Chance Bell in the game, and being able to move Kaegan and Jordan and take the focus off the ‘Bell Brothers’ that’s going to be a great combination for us as we continue to grow.”

“We’ve got to make Jordan a complete threat throughout the course of a game. He’s got to be on the field at least a good 35 to 40 snaps where he lines up all over the place. That started today.”

“It was obviously in the plan early (last year). We kind of pulled back a little bit for circumstances that sometimes have to happen as a coach, and now we get a chance to expand. That was definitely one of the things when we came in back in January that we talked about: making sure that his role is versatile and being a threat all over the field and down the field.”

Due to the unprecedented challenges it faced, 2020 was clearly a work in progress for the Aztecs. With little continuity on offense, the lack of practice time prevented the team from being anywhere close to its potential. Judging players or coaches too harshly based on last year is a mistake. In the context of a global pandemic and in comparison to other teams with coaching changing, the Aztecs’ offense clearly deserves a mulligan.

My earliest sport's memory involve tailgating at the Murph, running down the circular exit ramps, and seeing the Padres, Chargers and Aztecs play. As a second generation Aztec, I am passionate about all things SDSU. Other interests include raising my four children, being a great husband and teaching high school.
Tags: Aztecs, SDSU, SDSU Football

A Great piece gives us a much better understanding of what was happening. Coach Hecklinski deserves praise for his candidness. Can’t wait to see the new version with two new QB’s in the Mix and a six-foot-six WR that runs 4.3 forty.

Great point about coach Hecklinski’s openness. Coach also shouldered the responsibility and did not offer any excuses. As you say, should be exciting going forward!