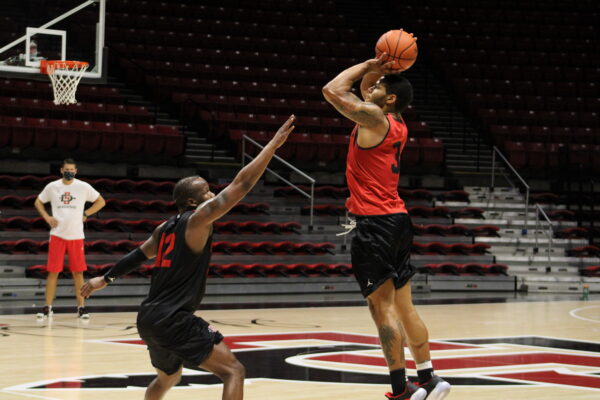 The San Diego State Aztecs own Saint Mary’s. After routing them 74-49 last year, the Aztecs continued their winning ways against the Gaels as they captured a satisfying 63-53 victory Friday night at the Footprint Center, which is home to the Phoenix Suns.

A night reminiscent of the 2020-2021 Aztec team, Jordan Schakel and Matt Mitchell did not return tonight, but the three-ball did.

Playing with a deeper NBA three-point line did not faze the Aztecs from downtown as they came into the game ranked 292nd in three-point shooting but shot 7-10 from deep tonight.

“It makes me extremely happy,” Coach Dutcher said about his team’s hot shooting. “The three-point shot is a huge weapon in college basketball, and we haven’t taken advantage of that weapon very often, but we did tonight.”

Adam Seiko was a perfect 4-4 from three.

Shooting beyond the arc was a deciding factor as both teams had the same free throw attempts, turnovers, and nearly the same number of rebounds, but Saint Mary’s only shot 5/20 from deep.

This was also a game of runs.

The Aztecs started slow; the eight days off gave the players much-needed rest, but the layoff came with rust. After only four points through six minutes, the Aztecs finally shook off that rust and went on an 11-0 run.

In the 2nd half, the Aztecs created an 11 point lead, but the Gaels went on a surging 13-3 run of their own to bring the game to one point.

The Aztecs sealed the victory on a 14-5 run in the closing five minutes.

It was a night when the stats did not lie. Both teams came into the game ranked top 10 defensively, according to KenPom. Both teams caused havoc as each team had 14 turnovers. The Aztecs shot 43% from the field, while the Gaels shot 36%.

The Gaels returned almost their entire roster from last year’s matchup, which included five players that average nearly 10 points per game. The Aztecs held the plethora of scorers in check as only Matthias Tass and Tommy Kuhse were in double figures. The Gaels leading scorer, Dan Fotu, did not make a shot. 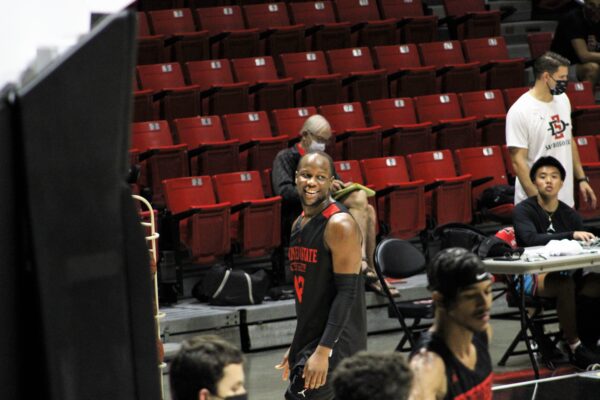 In addition to Seiko’s 12 points, the Aztecs had Trey Pulliam and Matt Bradley in double digits. Pulliam finished with 15 points and six assists on an efficient 6-11 shooting. Bradley chipped in 14, including some critical buckets down the stretch.

After Nathan Mensah put up a dominating 18 point stat line on 8-9 shooting in last year’s matchup, the Gaels defense homed in on him as he had five points on 2-10 shooting. However, he made a significant impact on defense and rebounding as he secured 12 boards.

“He affects the game in a lot of ways, even when he’s not scoring,” Bradley said about Mensah. “He’s the only big man that I’ve seen in college who can guard every position effectively.”

The first half was a defensive slugfest as both teams shot under 40% from the field. However, an important basket was from Keshad Johnson with a minute left to give the Aztecs a one-point lead. They went to halftime with a lead and never looked back. They now move to 6-0 when leading at the half.

With this win, the Aztecs finally secured a resume-building victory. Saint Mary’s already has a somewhat impressive resume with wins over Utah State and Oregon. Still, they also have future games against BYU and Gonzaga later in the year to enhance their resume further. This Aztec win could go down as a Quadrant 1 victory which will be significant when they are awaiting their name to be called in March.

This was the first game of the Jerry Colangelo Classic which features numerous college basketball powerhouses as Gonzaga, Texas Tech, and USC tip-off on Saturday. If the teams were in attendance, this game was a subtle reminder that the Aztecs are still a perennial power on the west coast.

The Aztecs now move to 7-3 and prepare for a San Diego rivalry as UC San Diego will be visiting Viejas on Dec. 22.

Padres Down on the Farm: August 9 (Tatis 2 Hits in Rehab/Kohlwey Hits for Cycle for EP)