The Aztecs struck gold late this month, nabbing eight commitments in one week. After hosting unofficial visits for some of San Diego’s top prospects and recruits from throughout the Southwest, the Mountain West Champs saw a rush of verbal commitments.

The first recruit to pull the trigger and join the Aztecs was Cedarious Barfield from El Paso, Texas. The three-star prospect came out to visit the campus to solidify his thoughts about the program, and ended up committing just a few days later. One of the best athletes in all of West Texas, Barfield chose to head west and play for the Aztecs over 10 other college offers. Although Barfield is a Texas Class 6A second-team all-state QB, (4,600 yards and 55 TD’s in 2016) the SDSU coaching staff envisions him as a CB and return specialist, with the opportunity to see the field on offense as well.

With a knack for always finding the end zone, Barfield’s ball hawking skills and play-making ability will make for an athletic and exciting DB in the Aztecs’ 3-3-5 scheme. The son of two retired Army soldiers, Barfield also shows the leadership qualities that are a prerequisite for Rocky Long’s players, and he has been actively recruiting his future teammates. I expect Barfield will play an active roll for the Aztecs all across the secondary and on special teams. Something that will make the college transition a bit easier for Barfield; he already plays for the “Aztecs”, the El Dorado HS mascot.

Less than 24 hours after the Aztecs received their first commitment, they picked up their first local commitment of the 2018 class. Rashad Scott of Helix HS decided he had seen enough from SDSU and was ready to pledge his commitment to the Aztecs. Following the team’s annual Hometown Hero event, an event put on for local HS juniors to come check out the facilities and meet the coaches, Scott started seriously thinking about playing for his hometown team.

A three star recruit and considered one of the top athletes in San Diego County, the 6’1″ 180 lb prospect is joining the Aztecs as a DB. Helix HS, one of San Diego’s premier football programs, will likely line Scott up on both sides of the ball in 2017 to maximize production from their star player. Looking ahead to a huge senior season, Scott is expected to surpass his junior season totals of 46 receptions, 774 yards and seven TD’s. Scott chose the Aztecs over seven other Mountain West rivals. Scott has the size, athleticism and ball-tracking ability to be a key player at either the Aztec or Warrior positions.

JR Justice, one of San Diego’s elite football recruits in the 2018 class, received his first offer from SDSU last summer and has since continued to blow up on the recruiting scene. Holder of 20+ offers (including USC, Louisville, Virginia Tech and more), Justice is intrigued by the thought of staying home and being San Diego’s next hometown hero. A four star recruit, Justice brings 6’3″ 200 lb size to the SDSU receiving corps that will create mismatch nightmares with Aztec opponents. A selfless leader focused on winning a CIF title, Justice is stepping into a new roll next season as the QB for Saints. The magnitude of Justice’s commitment should not be overlooked. For years, SDSU has been unsuccessful in keeping San Diego’s elite talent home. With one of San Diego’s best players deciding to stay home and help take the Aztecs to the next level, we are sure to see many more follow suit. Look for Justice to be an early contributor for the Aztecs, as he is one of the most “college ready” players I’ve seen in recent years.

Rocky Long loves linebackers, and linebackers love to play for Rocky Long. There are high expectations placed on Aztec linebackers, and the staff will look to new MLB commit Josh Bornes to meet them. Bornes is a 6’0″ 190 lb sledgehammer from San Marcos HS who is always the easiest guy to find on film; usually the one laying out the ball carrier. Bornes accumulated an impressive 6.5 sacks, three fumble recoveries, and 94 assisted tackles as a junior. SDSU was the first school to offer Bornes, and it didn’t take long for him to pick the Aztecs over other Mountain West offers. Also a running back for San Marcos HS, it will be interesting to see if Bornes gets a shot at playing fullback for the Aztecs. Bornes has received comparisons to former North County Aztec, Jake Fely, and rightly so. Both players may be considered “undersized” at their position, but they make up for it with superior football instincts and a love for contact. I expect Bornes to be a special teams fan favorite early before he works his way into the rotation at linebacker.

Not many FBS prospects come out of the state of New Mexico every year, but the Aztecs went down to Albuquerque and plucked out the best one in the 2018 class. Jordan Byrd is an electric football player who also set the New Mexico HS state track record with a 10.58 100m run as a junior. Byrd, who plays QB for his HS team, is projected as a hybrid slot receiver/running back at the next level. With game-breaking speed and the ability to put his foot in the ground and change direction on a dime, Byrd seems like the perfect fit for an Aztec offense that loves to get the ball to players in space. Byrd accounted for 23 touchdowns as a junior (14 rushing, three receiving, six passing) while also playing defense and returning punts. The three star prospect chose the Aztecs over offers from Washington, Utah, Arizona, Texas Tech and more. My best projection for Byrd is that he will have the ball in his hands a lot as an Aztec. 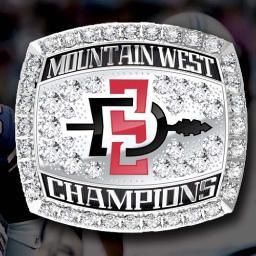 Steele Canyon big man Mikel Oliver’s recruitment has been a little under the radar after an injury slowed him down during his junior year. The hometown Aztecs had been recruiting Oliver since his sophomore year and knew the talent he has, but wanted to see him in person before offering the 6’4″ 240 lb TE/DE. All it took was one look at their passing tournament for the Aztecs to pull the trigger. Oliver, who has a great bond with the coaches and fellow commits, made his pledge to the Aztecs soon after. With the speed, size and athleticism to play multiple positions, Oliver fits the mold of Rocky Long coached big man. Oliver reminds me of former Aztec Robert Craighead, who did it all for the Aztecs on both sides of the ball. Regardless of where Oliver ends up lining up for the Aztecs, expect to see quickness and athleticism not normally seen from a guy his size.

After a recent unofficial visit to the Mesa, OG Jack York from Dallas, Texas decided he had found his home. The big man with 21 collegiate scholarship offers from across the country felt at home in America’s Finest City. York, who plays OT at First Baptist Academy, is ranked as the #4 OT in the state of Texas by Lone Star Prospects. SDSU OL Coach, Mike Schmidt, has a great prospect to mold with the 6’5″ 290 lb York, who can play OG or OT at the collegiate level. York has the great combination of light feet and a bulldozer mentality, not often found in HS recruits. As hard as York hits his opponents, he also hits the books just as hard as well. The three star prospect holds offers from six of the eight Ivy League institutions. Offensive linemen usually take a year or two to adapt to the collegiate level of competition, but York has all of the potential to be a future All-MWC talent.

Demajay Williams of Sylmar, California was yet another SDSU commit to choose the Aztecs over multiple Power 5 offers. The 6’0″ 180 lb athlete’s stock had been rising of late, accumulating six total offers, but decided he had seen enough and committed to recruiting coordinator Tony White. A Swiss army knife type player, Williams does it all for Sylmar HS. Whether it be playing across the defense, receiving passes, carrying the ball or returning punts and kick offs, Williams’ athleticism demands playing time. As a projected defensive back for the Aztecs, Williams will have the opportunity to play multiple positions in the 3-3-5 defense. Expect to see Williams make an early impact on special teams and develop into a versatile defender that has the ability to play multiple positions in the secondary at a high level.