Despite the San Diego Padres being in a rebuilding year and battling the San Francisco Giants for the cellar of the N.L. West, they have had some exciting moments and this team has become very interesting.

Everyone knows chicks dig the long ball. I dig the long ball, and I am sure most of you do too. That is why Hunter Renfroe and Wil Myers have made the Padres watchable, despite the team being double-digit games under .500.

Wil Myers hit 28 home runs last season and seems to be right back on track as he currently sits at 20 dingers on the year (for you sabermetric people who need something more, Myers also has an OPS+ of 108, above league average).

Not to be outdone, Renfroe has 20 bombs. The Mississippi country boy put on a show this past week against the New York Mets. Monday was a just showcase of what he is capable of. He is the present and future of the Padres’ organization. Renfroe launched a ball onto the rooftop of the Western Metal Supply Company building again. He also homered in the ninth ining to center field in the game. On the other side of the ball, he made a fantastic, run-saving catch out in right. The right fielder homered again in Tuesday’s game. Myers and Renfroe have now combined for 80 home runs in their Padre career so far.

This reminds me of another power-hitting duo to which Padres fans remember fondly.

Ryan Klesko and Phil Nevin were quite the pair for San Diego, mashing home runs for the Friars from 2000 to 2005. There is a decent chance Myers and Renfroe will be together just as long in San Diego. During his time with the Padres, Klesko averaged 22 home runs a year with a .277 average and 129 OPS+. He was an MLB All-Star in his second year in 2001, when he hit 30 dingers with 113 RBI while putting up a .286 average. 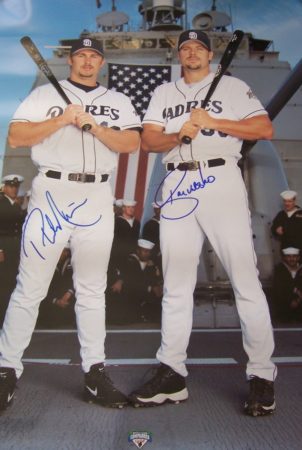 Nevin averaged 24 home runs with a .291 average and a 133 OPS+. Who could forget his 41-home run season in 2001? Klesko and Nevin combined for 71 home runs and 239 RBI that year. Although the 2001 Padres were less than stellar, posting a 79-83 record, they were in the top-half of the league offensively thanks to those two.

One difference between both pairs of Friars, is that Myers and Renfroe are just getting into their mid-20’s. Both Klesko and Nevin did not become Friars until their late 20’s and really surged into their early 30’s. While Klesko and Nevin donned the navy and white (the sand too), the Padres’ best season was 2004, when they just missed the playoffs with 87 wins. The Padres won the N.L. West in 2005, but Nevin had been traded to the Rangers and Klesko had begun his decline, hitting only .248 with 18 home runs.

The Padres hope to have success, as a team, in the prime years of Myers and Renfroe. It’s not quite time to write an article about them being the next Ken Caminiti/Greg Vaughn duo, and perhaps the Nevin/Klesko comparison is too early. But they are just getting started and the sky is the limit with this duo.

Renfroe is currently chasing Nate Colbert’s Padres rookie home run record of 24. If he can stay healthy, he should cruise past that number that has stood since the inaugural year of the Padres franchise (1969). In this new “home run era” …. who knows? Perhaps Renfroe and/or Myers will be chasing Colbert for another Padre’ record someday.

Native of Escondido, CA. Lived in San Diego area for 20 years. Padres fan since childhood (mid-90s). I have been writing since 2014. I currently live near Seattle, WA and am married to a Seattle sports girl. I wore #19 on my high school baseball team for Tony Gwynn. I am a stats and sports history nerd. I attended BYU on the Idaho campus. I also love Star Wars.
Tags: 2001 Padres, Hunter Renfroe, Phil Nevin, Ryan Klesko, San Diego Padres, Wil Myers