Despite social media’s reductions and simplifications, each athlete’s journey is unique.

While similarities certainly exist, comparisons of different people’s paths are fair only to a point. Among the commonalities seen on numerous TikTok videos is how a player responds to the inevitable challenges football brings to anyone who plays the game.

Adversity struck this season for junior Anthony McMillian, Jr. and Mater Dei Catholic High School (MDC) in Chula Vista. In the three non-Covid seasons prior to 2021, the Crusaders had 17 total victories. In 2021, they won all 13 contests on their way to winning a Division 2-AA state title. With much of their team returning for 2022, the coaching staff put together one of the most difficult schedules to start a season in San Diego section history.

MDC opened against San Diego powerhouse and defending 1-AA state champion Cathedral Catholic and lost 28-14. In week 2, they played Carlsbad, who would finish the season ranked #13 in California. They lost again, 36-35, on a last-minute two-point conversion after a clear missed call by the referees. In week three, they were defeated 35-16 by Red Mountain High School, who ended the year as a semifinalist in the Arizona state playoffs.  Lincoln High School was next. The Hornets ranked #3 in the state on the final ballot offered its first glimpse of the powerhouse it would become by dismantling MDC 56-20 in a contest that ended with a running clock.

“It impacted me because it showed that what I was doing wasn’t enough,” McMillian said. “Even though I was doing decent, to be able to beat these good teams, I have to have great games to uplift my team.”

“It impacted us because we saw that we not were the hot stuff anymore. We came in the season a little cocky, and it really humbled us, so we just got back to how we were and started winning.”

“No one feels sorry for you,” MDC assistant coach Thelis Braswell explained when asked what the staff’s message was to their team. “In fact, some people are elated this is happening.”

Nursing four defeats, the Crusaders limped into their bye. Like the turning of Sylvester Stallone’s hat in the cult classic Over the Top, they were reborn after their week off. Over the final six games of the regular season, they won by a combined score of 281-0.

McMillian’s contribution during this run was spectacular but limited. After averaging 15 carries a contest over the first four games, he was handed the ball eight, six, six, two, and one time over the next five games. His focus was to make each touch count while enjoying the opportunities the coaching staff gave his teammates. McMillian certainly made the most of his 16 carries. He averaged 21.63 yards per rushing attempt, totaling 346 yards and three touchdowns.

MDC increased McMillian’s workload against South County rival Eastlake to end the regular season and in its first playoff game of the Division One San Diego Playoffs. It set up a revenge matchup against Cathedral Catholic.

“We wanted (the rematch) real bad because they were always talking a lot of trash,” McMillian said. “Even besides that point, we wanted to prove it to ourselves, not even to anyone else, that they weren’t a better team than us. We just wanted to prove that the first game was a fluke. We should have come out and beat them. That’s what we went out and did.”

“Our game plan against Cathedral was to spread them out because they are really strong in the trenches,” Braswell explained. “To us, to this very moment, they are still the premier program in the county. They are the hallmark. In order to pull (a victory) off, we put two receiver sets on both sides … and gashed them up the middle as best we could. (McMillian) got 24 carries that game for more than 100 yards. He scored a touchdown.”

In the 14-9 victory, McMillian had more than half of MDC’s yards.  With their young offensive line coming of age at the right time, the Crusaders continued to pound the rock. McMillian finished the year with 100-yard games in five of the final six contests.

In the postseason, he showed next-level explosiveness, bursting through holes in the line. With McMillian leading the way, the Crusaders completed the turnaround, winning back-to-back state titles. 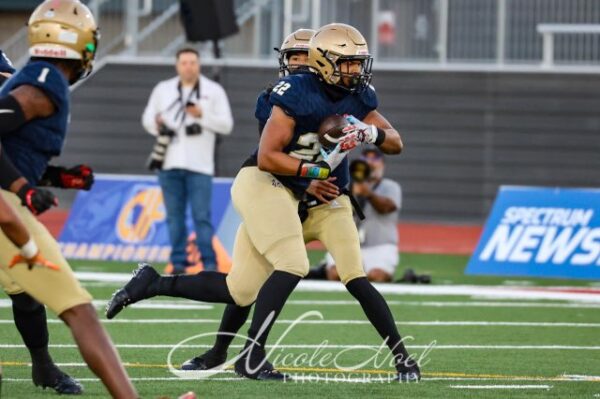 Originally from Alabama, McMillian is from a military family. His terrific upbringing comes across in a number of ways. He may have moved to San Diego too soon to adopt the renowned southern charm, but there is no question he is charming. Humble, coachable, and grateful for those around him, it is no surprise his offers have ballooned to more than a half dozen.

“He’s one of those boys you wouldn’t mind dating or marrying your daughter,” Braswell, who only has daughters, said. “He’s an outstanding young man, comes from an outstanding family. His dad is an officer in the military. … he’s real gracious and humble. He’s been that way since I first met him when he was seven.”

McMillian’s character comes across most when describing his teammates, even those above him on the depth chart. As an underclassman, he backed up Nico Mosley, a 5’8 scatback, who fit MDC’s spread offense as a threat to catch the ball out of the backfield. In 2021, Mosley was the featured back, and McMillian the understudy. When Mosley would break off a big run or reception for a score, McMillian would sprint down the sideline to be the first to celebrate with him.

“Nico’s meant a lot for me because, obviously, we’re two different styles of running backs,” McMillian explained. “Him being able to coach me on one style that I need to improve in, it really helped a lot. He always just stayed there next to me like my big brother. I really appreciate Nico a lot.”

Physicality is McMillian’s calling card. He stands 6’0, weighs 215, and has a compact running style that shields him from the big blows bigger backs typically take. He grew this past season, becoming better at recognizing holes on the fly and using his quickness and terrific feet to exploit seams in the defense. 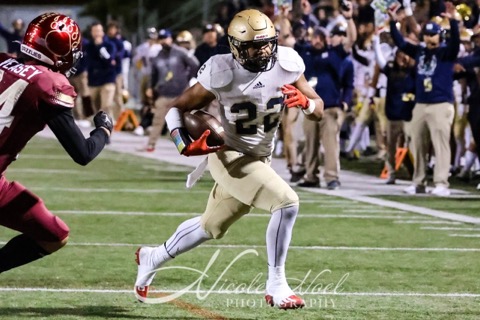 As he prepares this offseason for his senior year,  he is working to be more explosive and fast to complement his power, vision, and agility. McMillian is also putting into practice the lessons Mosley taught to him and becoming a complete back that is a threat in the passing game.

San Diego State and Washington are the two schools recruiting him the hardest. Defensive coordinator Kurt Mattix is SDSU’s area recruiter and is the person leading the Aztecs’ effort. McMillian, who plays outside linebacker as well, said Mattix likes him more on the defensive side of the ball.

“It feels real good being able to stay close to family, close to friends and everything,” McMillian replied when asked about his feelings on playing in San Diego at the next level. “They would be able to come watch me play at Snapdragon. I went to the Spring Game and the very first game of the year. It’s just a really good atmosphere. Everyone’s loving and supportive, so that would be a good atmosphere to play under.”

In choosing a school, his priorities are development and academics. He has NFL aspirations and wants to be pushed and coached to reach his full potential. Academically, Math and Chemistry are his favorite subjects. He understands the opportunity a higher education can present to him.

The past two seasons, San Diego high school football has been defined by two big running backs. In 2021, Cathedral Catholic’s Lucky Sutton (6’1, 210 lbs) took the county by storm leading the Dons to a state title. Sutton, who is a freshman at SDSU, ran for 2,628 yards and 36 touchdowns his senior season. This year, Roderick Robinson (6’1, 230 lbs) rushed for 2,378 yards and 39 touchdowns, leading Lincoln to a state title of their own and the number three ranking in California.

Sutton and Robinson are McMillian’s friends, and the south county RB has learned from both. Braswell said he “expects” McMillian to be the next big back to star in America’s Finest City, explaining that the Crusaders will be losing a lot of talent on offense and will depend on the running game more as they pursue a third consecutive state title.

2023 has the makings of being a special year for McMillian. Should he continue his ascension on the gridiron, opportunities to play football at the next level will open up all over the country. Whether it is in Seattle, San Diego, Tuscaloosa, or anywhere else, McMillian’s character, work ethic, and skill will make any team better.

My earliest sport's memory involve tailgating at the Murph, running down the circular exit ramps, and seeing the Padres, Chargers and Aztecs play. As a second generation Aztec, I am passionate about all things SDSU. Other interests include raising my four children, being a great husband and teaching high school.
Tags: Anthony McMillan, Mater Dei, SDSU, Washington