When a team has been struggling to score runs the way the Padres have this season, it’s tough to see a guy like Wil Myers go down to injury, especially so soon after he looks to have found his stroke at the plate. But this is the reality of sports and injuries. There’s nothing anyone can really do to keep Myers from fouling a ball off his foot, so this is more about bad luck than anything else.

After the team’s performance in July, we can definitively say that this season is done as far as contending is concerned.

Not that many expected the Padres to compete for a playoff spot all year, but now it’s crystal clear that the team has no chance of being competitive this season.

So losing Myers doesn’t hurt so much when we keep in mind the fact that now the Padres can get a more extended look at Franmil Reyes in the major leagues, who was recalled in Myers’ place.

It also lets Travis Jankowski get more everyday at-bats, which is important for the Padres too. With Margot entrenched in center field, and Renfroe receiving most of the starts in right field against lefties, Jankowski and Reyes were left with little playing time outside of the occasional start or pinch-hitting opportunity.

Jankowski has always played exceptional defense at all spots in the outfield, so with that alone he provides good value as a player. When he gets on base he’s a burner, so that’s another way he’s valuable to the Padres. Franmil Reyes is a guy who will have to hit well to stay in the major leagues, and he’s shown flashes of being able to do that.

Reyes makes very good use of his 6’5”, 275 pound frame to hit baseballs pretty hard when he does make contact. Of course he isn’t perfect, and there’s a reason he’s been shuttled to and from Triple-A fairly often this season. He’s striking out in 37.8% of his plate appearances, and his 6.3% walk rate could be better. Nonetheless, his strong hitting with El Paso and the power he has shown in San Diego make the Padres intrigued enough to keep him around.

First off, he has to cut down on his whiffs in the zone. Take a look at the Statcast locations of pitches he’s whiffed on this year: 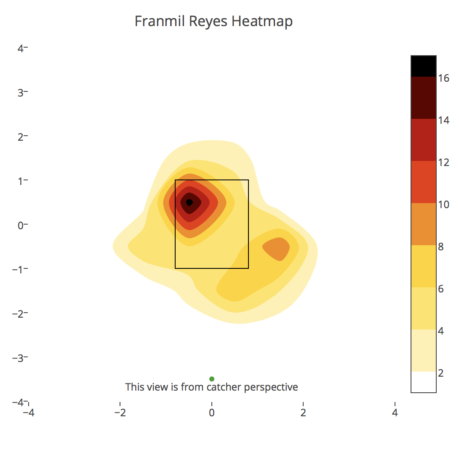 It’s clear that Reyes has issues with the up-and-in pitch location, as he’s whiffed most often in that location. He also looks to have some problems with the low-outside corner, and laying off those pitches. What’s somewhat surprising about this is the fact that Reyes stands pretty far off the plate when he hits, so theoretically the high and inside pitch shouldn’t be too difficult for him. 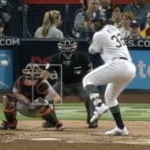 When we really look at his swing length though, it’s clear that he has a longer swing geared to hit for power. He hits pitches on the outside part of the plate better than anywhere else, so that’s the primary reason he struggles with pitches thrown up and in.

Really, the point is that Reyes hasn’t gotten enough regular at-bats to prove himself in the major leagues yet. He’s only had 111 plate appearances, so the Padres should give him plenty more opportunities to find his stroke at the big league level. With Myers being out now, it’s a great time for that to happen. When we see a hitter make contact the way Reyes has, it’s impossible not to be excited by what he could potentially do as a hitter. He’s looking a little raw at the moment, but Franmil Reyes is worth a look for the Padres while Wil Myers is injured.

To wrap things up, it’s going to be a really interesting month of August for this Padres team. Travis Jankowski has played like a very useful major leaguer at times in his brief career with San Diego, and getting more at-bats will only help the team evaluate how well he can be valuable with consistency. It’s also likely they get some long looks at Reyes in the major leagues, and if he plays a fair amount, they’ll be seeing him face contending teams the whole month of August. Regardless of what happens, the team will learn a lot more about those two outfielders in the next two months.

“found his stroke at the plate”? well he seems to have lost it again. Here is his slash line for the last 15 days: .233/.233/.419, and for the last 7 days: .167/.167/.222. Typical all or nothing Myers season.
Best case scenario, he recovers from the latest injury, comes back with a hot finish to the season, and gets traded this off season. He is a so-what player who is about to get very expensive.
With an overloaded OF situation it makes sense to trade him so as to give ABs next year to Cordero, Renfroe, Jankowski and Reyes.