The numbers for Jacob Nix in 2018 as a San Diego Padre are a bit confusing, but the right-handed pitcher does have some real capability. Let’s take an analytical look at the pitcher and what his future looks like for the Friars.

Thus far in Jacob Nix’s major league career, his performance has been volatile.

In his major league debut, he threw six shutout innings against the Phillies, and then promptly gave up five earned runs without escaping the first inning in his second outing. When we’re dealing with a player whose performance has very little consistency from start-to-start, it’s difficult to have an idea of what his talent level is.

For the most part, he struggled in the major leagues, but his couple of starts that went very well provided a glimmer of hope.

Here’s a chart showing his FIP numbers in each individual start he made last season for the Padres: 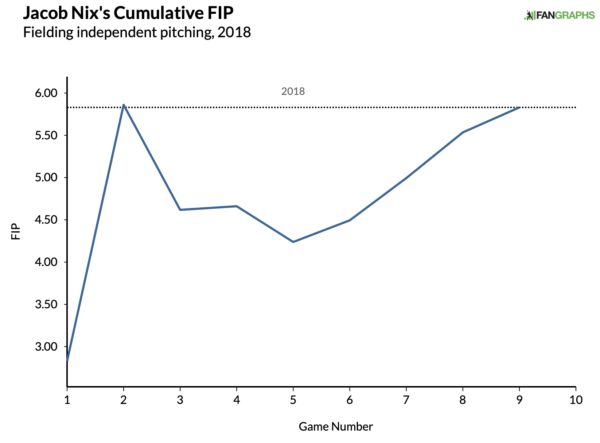 He started his career by pitching so well for the team, had a couple rough outings, and then pitched brilliantly again. After that impressive outing, however, Nix regressed consistently throughout the rest of the season. Does Nix simply show up some nights, and not on others when he makes starts? It’s very likely, but there has to be something else the data can tell us regarding his performance that helps explain it further.

His pitches were thrown at almost exactly the same velocities throughout August and September, suggesting that he wasn’t tired during the latter part of the season when he struggled. Here are Nix’s velocities for all of his pitches, courtesy of Brooks Baseball:

While his stuff has graded out well according to scouts, in the majors last season, it didn’t help him miss very many bats. The lack of strikeouts in Nix’s starts contributed significantly to his struggles as the year wore on, which we’re going to analyze in more detail. Across 42.1 innings pitched at the major league level in 2018, Nix only struck out 21 hitters. That’s not encouraging, especially considering the batted ball data of his opponents. Similarly to his overall inconsistency in performance, Nix often struck out many hitters in a given start, or hardly any at all. In his best two starts, he recorded the lowest K/9 figures in any of his nine outings. Why did he struggle to generate whiffs?

In understanding Nix’s issues with missing bats, it’s key to look at the amount of quality contact opposing hitters made with his pitches. The Statcast data proves to be an excellent resource in this investigation and provides more specific information regarding the aforementioned right-hander’s hiccups. Let’s look at the exit velocities of batted balls hit against Nix, by count: 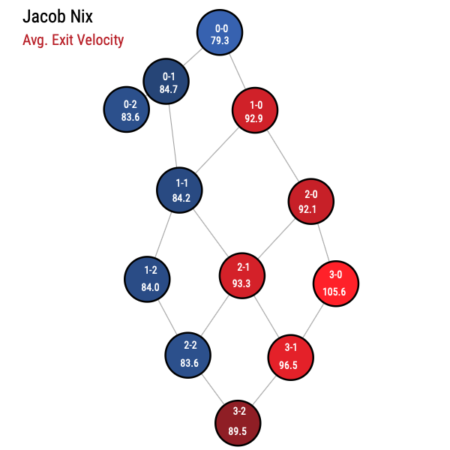 So Nix at least pitches well when he’s ahead in the count, and isn’t hit hard very often in those situations either.

He struggled mightily, though, when he fell behind hitters. His pitches were demolished in 3-0 and 3-1 counts, which was especially concerning regarding his pitching. It’s not surprising to see him give up the highest average exit velocities on pitches in those counts, to be clear. Allowing exit velocities that high is problematic and raises eyebrows because of how often they fall for hits. Among all batted balls hit during the 2018 MLB season at 105 mph, 66.9% of them fell for base knocks. He also allowed 7.9% of plate appearances to end in hitters barreling his pitches, a number that ranked him 306th out of 310 qualified MLB pitchers.

Further exacerbating his issues was the fact that he progressively pitched more poorly as he pitched deeper into games last season.

Opponents hit .282 against him the first time facing him, .297 on their second try, and .324 when going up against Nix the third time through the order. His ERA when facing hitters a third time in starts was an astounding 9.72, which speaks to his struggles in being able to find consistency in his starts. It looks like Nix is the kind of pitcher that manager Andy Green should not leave in games for too long because he clearly didn’t pitch well towards the end of his starts in 2018.

There were some positives from Nix during the 2018 campaign, and he’ll only be turning 23 on January 9th. He’s a young pitcher who has shown the Padres enough over the course of his career and last season, that they’ll give him plenty of chances to start in the big leagues in 2019. There’s a lot of room for him to grow and learn from this season because of how often opponents squared up his pitches. It’s just concerning to see that he was hit around significantly last season, and that provides plenty of reason for concern moving forward.

If Nix can better harness his stuff and improve his overall game at the major league level, the Padres will have a valuable starting pitcher. However, if Nix continues to get hit around like he did last season, it’ll be hard for the team to justify keeping him in the rotation. The coming season will be very important for Nix, as he looks to hold down a rotation spot for the Padres as they move towards future contention.

A sophomore at Willamette University in Oregon, Conrad is majoring in Spanish but is also a writing center assistant for other students at Willamette. He has been a Padres die-hard his whole life and hopes to bring comprehensible statistical analysis to the site.
Tags: Jacob Nix, Jake Nix, Padres 2019, Padres Nix, San Diego Padres