There are a number of keys to any college football game.

Saturday’s contest was no different, but if SDSU’s victory over Air Force could be boiled down to one area, it was the Aztecs’ ability to take advantage of when the Falcons’ offense got off-schedule.

The triple-option thrives on setting up third and short situations by earning only a handful of yards each on first and second down. It is a receipt for success because it is nearly impossible for a defense to prevent two to four-yard gains all night. 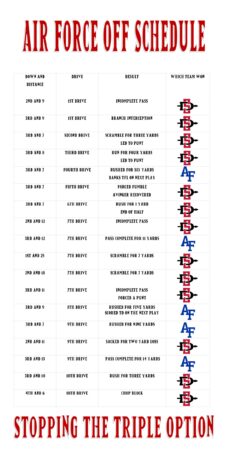 For this article, “off-schedule” is defined as times when Air Force has first or second downs of more than ten yards, third downs of seven or more yards, and four downs of five or more yards. Incredibly, SDSU’s defense forced Air Forced to be off schedule at least once in all ten possessions of the game.

As the chart on the left shows, during the first half, when the Aztecs pitched a shutout, only once were the Falcons able to get back on schedule. However, in the second half, Air Force did a much better job of converting the unfavorable situations. Aztec fans are familiar with the importance of staying on schedule from when Jeff Horton was the offensive coordinator. On Saturday, they won this key and, as a result, remained undefeated.

On most Saturday’s SDSU runs a 3-3-5 defense, which, among its many benefits, allows them to change the look they give opposing offenses. Against Air Force, they basically scrapped that approach, trading the smoke and mirrors for simplicity and predictability. Sophomore linebacker Vai Kaho was inserted into the starting lineup for safety Cedarious Barfield giving the Aztecs a true 3-4-4.

“Vai is somebody that – I think everybody sees on the field. You see his energy and passion for the game,” linebacker Michael Shawcroft said postgame. “And I love it! I love playing with him. I love being around someone like that, who is always going to give 100% every single snap no matter what. I think he did great tonight and played in a big role that we needed.”

Switching to a 3-4-4 has several advantages, but one main key is it gives a balanced front, so no matter which side of the formation Air Force runs to, the numbers game is the same. Some of the Falcons’ most dangerous plays are when they motion a player one direct, but they counter the opposite direction. This play could take advantage of the unbalance of the 3-3-5, but with the 3-4-4, the play is nearly neutralized presnap.

“Being more physical,” coach Hoke responded when asked about the 3-4-4 formation. “Instead of having another DB in there, we really felt our linebackers group’s a really good group. They’re really well-coached. It (allowed) us to put some bigger bodies out on the field that are pretty athletic also.”

– The depth of SDSU’s defense was on full display. Due to the physical nature of the game, the coaches substituted more liberally than in other games—no matter who ran outplayed competently for the Aztec.

– Vai Kaho was not the only new starter. Dallas Branch began the game and rewarded the coaches by getting an interception on the opening drive.

– Another reason SDSU could play the 3-4-4 was the excellent sideline to sideline pursuit by Patrick McMorris.

– Lucas Johnson continues to have trouble throwing screen passes. While they are important in Jeff Hecklinski’s scheme, they are not what Johnson does best. It will be interesting to see if they call less of those plays going forward.

– Matt Araiza is a superlative on its own. What else is there to say? He tied an NCAA all record Saturday for most punts of 60 or more yards.

– Keshawn Banks tackling the QB on fourth and one just after the snap has to go down as one of the better plays a defensive lineman can make. He tried it again later in the game and was offsides. SDSU will take that exchange every game.

– Dominic Gudino as a tight end it great. In a game where each team lined up without many secrets, his inclusion made sense. It will be interesting to see his contribution going forward.

– Elijah Kothe’s play was needed Saturday. His chemistry with Johnson is apparent.

– 20 of SDSU’s first 25 plays were in Air Force territory. That is dominant play.

– When Air Force plays a good, disciplined defense like the Aztecs, it really exposes how little their margin for error is.

– The opening drive of the second half was a championship drive.

– Jordan Byrd, after going missing the past two games, showed why that can never happen. His speed is such a change of pace for the offense.

– The Aztecs punished the Falcons, who had several fatigue-type injuries throughout. SDSU’s ability to run fresh bodies into the game who can play was so important in this game.

– Warrior safety CJ Baskerville is long, fast, and going to be very fun to watch.

– True Freshman Ryan Wintermeyer continues to be nails in his first college action.

– Even in his limited action, Greg Bell showed what separates him from the rest of the running backs. His vision to cut back and gain extra yards is special.

– Following SDSU’s opening drive of the second half, Air Force only had four drives to catch up. SDSU’s defense may not have stopped the Falcons, but they made t

My earliest sport's memory involve tailgating at the Murph, running down the circular exit ramps, and seeing the Padres, Chargers and Aztecs play. As a second generation Aztec, I am passionate about all things SDSU. Other interests include raising my four children, being a great husband and teaching high school.
Tags: SDSU Air Force, SDSU Football, SDSU vs Air Force