Adrian Morejon’s knuckle change makes him a valuable commodity for the Padres Opening Day roster. What’s in store for the 22-year-old this season?

At the start of spring training in February, it looked like Adrian Morejon was the only young lefty who was likely to begin the season on the Padres’ major league roster. However, last week José Castillo went down again and is set to have Tommy John surgery.

Furthermore, Matt Strahm looks likely to be on the DL to start the season, which has the potential to open the door for pitchers such as MacKenzie Gore and Ryan Weathers to make an impact earlier on. Dennis Lin of The Athletic has indicated that the Padres’ front office is understandably high on Weathers. After an outing that finished with him throwing a nine-pitch second inning, MacKenzie Gore is coming on as a pitcher who should get a look as a starter for the Padres very soon.

Is it possible that the Padres will carry all three of the aforementioned young lefty arms in Ryan Weathers, Adrian Morejon, and MacKenzie Gore?

Based on recent developments, it is certainly not unreasonable to speculate about the possibility of the Padres using all three as part of the pitching staff as early as opening day 2021.

At the minimum, he has the most experience among the three arms who all have the ability to bring significant value and upside to the San Diego rotation in the years to come.  Likely the most advanced amongst the three young Padres lefties mentioned earlier is Adrian Morejon.

Therefore he is the most obvious candidate to make the roster; He made his debut in the middle of the 2019 season as a swingman between the bullpen and rotation. The Padres think highly of the 22-year-old lefty, whom they signed to an $11 million signing bonus in 2016. Take a look at how his MLB numbers improved over the course of the last two years with the Padres:

In 2020 Morejon threw the ball in the zone with greater frequency and got more strikeouts than he did in 2019 while also inducing more ground balls. The results are backed up by his lower xFIP and average exit velocity allowed to hitters.

His strikeout rate ranked in the 86th percentile amongst all major league pitchers, while his walk rate was in the 89th percentile. It is key to note that the complete picture of the Cuban lefty did not look completely positive by the numbers, as his expected Statcast numbers did not paint as pretty of a picture with regard to his 2020 season:

It would be tempting to say that Morejon’s discouraging expected numbers from last year are a fluke from a short season’s worth of data, yet the fact is that he threw more major league innings last year than in 2019. What was the reason for him having hitters feasted on his fastball in 2020, to the tune of a .333 average and .349 expected batting average (XBA).

This is rather puzzling because his fastball had an average spin rate of 2404 RPM, which ranked in the 78th percentile among major league pitchers and suggests that the pitch should be hard to hit. The pitch also fell in the 92nd percentile in terms of velocity, with Morejon throwing it at an average of 96.6 mph in 2020.

The real issue for his Fastball in 2020 was that he simply left it over the heart of the plate too often. Take a look at this heat map of the location of his four-seam fastballs he threw in 2020: 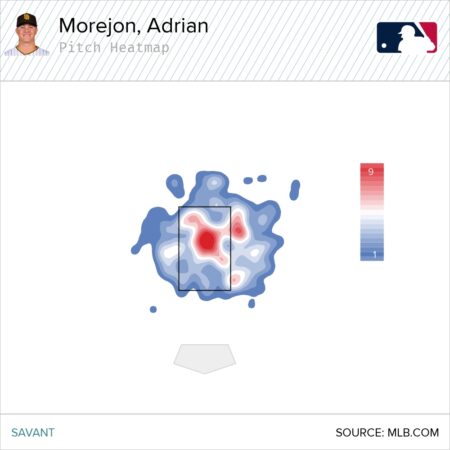 You don’t need me to tell you that throwing the fastball down the middle in the major leagues is not a good idea. So Morejon has a hard fastball which can be much more effective if thrown to the edges of the plate more often. Clearly, he missed over the middle of the plate a lot last year, which was an issue for his fastball’s efficacy. Twelve of his twenty hits allowed were off the fastball (60 percent), and five of the seven (71 percent) homers he allowed all year were surrendered off the pitch.

There were other pitches, though, that Morejon began throwing more often than he had previously. The secondary pitch he threw most often in 2020 was a knuckle change, which he threw 17.4 percent of the time and was very useful for him. His opponents only hit .167 off his knuckle change, with an XBA of just .190 versus the pitch. (The pitch is labeled as a split-finger on statcast but appears to have knuckle change movement).

Take a look at the aforementioned knuckle change in action:

The knuckle change was Morejon’s best pitch last season, as it induced a whiff rate of 57.1 percent. He only surrendered an average exit velocity of 85.0 mph on the pitch and only allowed three hits in 2020 when he threw the knuckle change. Something really interesting about the pitch is that he generates only around 1000 RPM with it.

Considering that most of his pitches are around 2500 RPM, it is definitely a very unique pitch. Based on the data we have on it thus far, it is also a highly dangerous pitch for Morejon. So clearly, he has some fastball command to work on, but his knuckle change shows a lot of promise, and he also generated a 47.6 percent whiff rate on his slider in 2020. He certainly has the stuff to be a successful starter in the major leagues for a long time.

As the 2021 season approaches, look for Morejon to be a strong starter for the Padres in the rotation. His keys to success are commanding the fastball and throwing his knuckle change more often as his main secondary weapon. Considering that he has potentially four pitches that can play well at the major league level, he should be able to keep hitters off-balance consistently.

If Morejon can command his fastball and throw more quality knuckle changes, look out because his potential is immense. It is not a guarantee that he will be a star pitcher, but the high ceiling he has, due to the quality of his pitch mix — is undeniable.

A sophomore at Willamette University in Oregon, Conrad is majoring in Spanish but is also a writing center assistant for other students at Willamette. He has been a Padres die-hard his whole life and hopes to bring comprehensible statistical analysis to the site.
Tags: Adrian Morejon, Mackenzie Gore, Matt Strahm, Padres, Padres Bullpen, Padres Rotation, Ryan Weathers

Morejon has shown promise but he can’t stay away from the injuries. Maybe we’ll see him mid next year now? That has given weathers the opportunity to step up and start. He has been impressive so far. Another young stud arm in the rotation is a blessing. I don’t think Paddack will remain in the rotation much longer as a two pitch pitcher. The league has figured him out and he needs to develop a pitch other than the curve he throws a few times a game. I’m interested to see what Gore brings to the table. I’m thinking the… Read more »