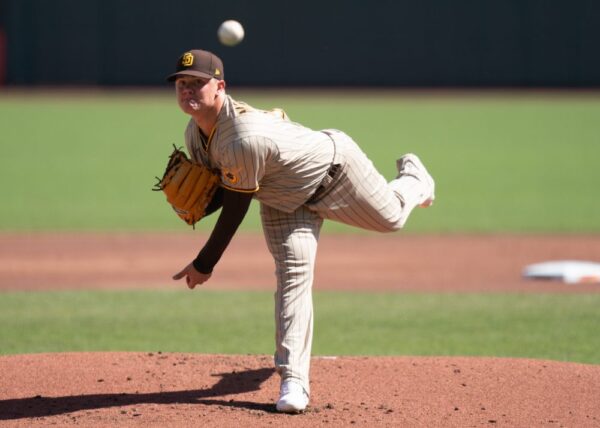 Signed by the San Diego Padres as a prized international free agent in July of 2016, Adrian Morejon has always been a coveted arm within the organization.

Set to enter his age-24 season this upcoming year, Morejon debuted in the big leagues at 20 years old four seasons ago. He cracked the club in 2020 and 2021 as well, though suffered an elbow injury that led to Tommy John surgery early in the latter season.

Morejon’s biggest taste of the game’s highest level came this past season when he appeared in 26 games and hurled 34 innings for the Padres. Though his ERA (4.24) and WHIP (1.17) aren’t flattering, the volatility of reliever numbers proved throughout the year for Morejon.

He had two outings in which he recorded just one out and allowed a combined eight earned runs, which obviously inflated his all-around numbers. In contrast, Morejon surrendered only one run in 11 outings throughout the month of August, several of which were multi-inning stints.

Throwing high-90s heat from the left side with a devastating breaking ball, there’s certainty that the Padres continue to think highly of Morejon. He’s essentially the last prospect of theirs from formerly the game’s best farm system that remains – something that speaks volumes given how many young players the team has traded away over the last few seasons.

Entering what should be the most important season in quite some time for the team, Morejon’s role is yet to be determined, although it’s likely he’ll play a big factor on their staff.

Reports are floating around that the Padres are committed to adding at least one more starting pitcher to their rotation. While that is the likely scenario, it doesn’t necessarily mean that a player like Morejon wouldn’t be given an opportunity to start early in the season.

San Diego’s starters were heavily taxed in 2022, and they saw some of the highest usage rates across the league. With a deep postseason run comes more playing time, and starters like Yu Darvish and Joe Musgrove each eclipsed the 200+ inning mark. Blake Snell’s bill of health hasn’t ever been the greatest, and Nick Martinez is making his way back into a starter’s workload after relieving for a huge chunk of last season.

The Padres benefited greatly from key pieces in the rotation staying healthy all year long, but the likelihood of that recurring is slim. Even if they bring in another veteran presence to this staff, running with a six-man rotation at times would greatly benefit this team. It’s something they did last year, and it played a huge factor in keeping the workhorses healthy for the playoff run.

Deploying something like that takes options, and luckily for San Diego, they have some. It’s highly likely that Ryan Weathers, Jay Groome, and Reiss Knehr see time in the big leagues this season out of pure depth and necessity.

And, of course, they have Morejon.

Starting the year with this six-man option gives Morejon the highest chance to earn a spot. He has the loudest stuff of that bunch, has pitched the most big-league innings, and is the most talented young arm they have in the organization.

Giving Morejon a handful of starts helps his development and also provides the team with more depth should one of their top-end starting pitchers go down with an injury. He could certainly play the ‘Nick Martinez’ role in 2023 and serve as a key piece for this team’s championship quest.

Diego works at Prep Baseball Report as an Area Scout in Illinois and Missouri. He graduated this spring with a Bachelor Degree in Communications and played four years of college baseball, logging nearly 50 innings of work in a relief role. Diego hopes to work in an MLB front office one day and has been a Padres fan since he was six years old.
Tags: 2023, Adrian Morejon, Baseball, MLB, San Diego Padres