The San Diego Padres and Chicago Cubs could benefit from this mega-trade.

The time is now for the Padres to take the next step towards playoff contention.

The San Diego Padres have done a great job in acquiring veteran, All-Star-caliber talent to pair with a young core of highly talented players. However, there are still some glaring needs that the organization must address to compete for their first playoff berth since 2006.

These areas of need include outfielders and veteran starting pitching. Having traded Hunter Renfroe and Manuel Margot this offseason, their positional depth chart is headlined by Wil Myers primarily. As for starting pitching, the Padres have made strides in developing their rotation, particularly in Chris Paddack and Cal Quantrill, along with MacKenzie Gore and Luis Patino in a very deep farm system. However, they are still missing experienced veteran pitching that they have been unable to acquire in free agency, relative to other positions on the team.

In looking around Major League Baseball, there are several trade partners that the organization can engage with and attempt to turn these weaknesses into advantages. In looking across baseball, the Chicago Cubs seem to be an ideal candidate. What may entice the Cubs to engage in a trade is to shed some payroll, particularly with their starting pitchers, while augmenting their talented offense with some depth. They may also look to add some bullpen depth behind Craig Kimbrel. Here is the blockbuster trade proposal that may benefit both franchises:

From the Padres perspective, this automatically upgrades their starting pitching rotation and outfield unit immediately:

Lester: A three-time World Series winner, Jon Lester is an ideal fit for the Padres for a myriad of reasons. The first being that he has been in the game for 14 years, spending five of them in the National League (all with Chicago). He is a strong veteran presence for any young pitching core and is a perfect fit for San Diego.

Second, he is still productive, relative to where he is in his career currently. His curveball is highly underrated, as opposing batters whiffed on the pitch 40.3% of the time. He also allowed an opposing wOBA of 0.239 on that pitch. Against the other NL West teams, he is also highly impressive, with a combined ERA and SO/9 of 3.20 and 8.80 respectfully.

Finally, if the Padres manage to make the postseason in 2020, Lester will be a vital component for a deep run. Having pitched 154 innings in the playoffs, he has an ERA of 2.51, a WHIP of 1.019 and a SO/9 of 7.80. If the franchise were to make this trade a reality, Lester’s immediate impact would be felt in a short period.

Hendricks: Amongst pitchers that threw at least 2,500 pitches in 2019, Kyle Hendricks finished eighth in average changeup spin (2,115 rpm) and ninth in average curveball spin (2,784 rpm). Relative to National League pitchers that threw at least 170 innings, he ranked third in BB/9 (1.63) out of a group of twenty-seven pitchers. In the totality of his career, he has also been very consistent in generating positive outcomes, while limiting negative ones, as reflected in his FIP over the last five years:

The skillsets of Hendricks are a welcome addition to a Padres rotation that projects to be highly skilled over the next several years.

Heyward: By acquiring Heyward, he is an immediate upgrade over Wil Myers, both at the plate and in the field. Offensively, Heyward is more productive and patient at the plate, relative to Myers. In reference to the chart below, since 2015 Heyward’s strikeout rate has been significantly lower year after year, meaning that he sees more pitches and is more patient, whereas Myers does not possess this ability: 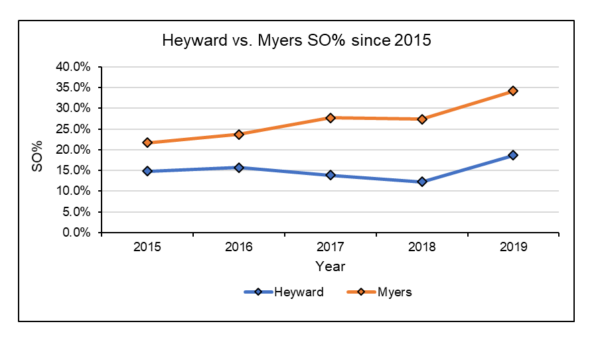 From a defensive perspective, Heyward has been elite in this category for the majority of his career. A five-time Gold Glove winner, he is still a premier lockdown defender in the outfield. Amongst right fielders in 2019, he ranked 2nd in Outs Above Average (OAA) with 7. OAA is essentially the cumulative value of the plays a fielder made, accounting for range, number of made plays, and their degree of difficulty.

Rizzo: At 30 years of age, Anthony Rizzo is still one of the preeminent first basemen in the game, and an underrated defender, having won three Gold Gloves and a Platinum Glove. A versatile offensive player, his quality of contact historically is impressive. Using 2019 as a reference, Rizzo’s xwOBA, xBA, and xSLG finished in the 94th, 95th, and 78th percentiles respectfully. For a broader perspective, amongst other first basemen, he ranked 3rd in xwOBA (0.390), 2nd in xBA (0.300), and 10th in xSLG (0.497). This combination of defense and offense is a welcome addition to a Padres lineup that is already talented in these categories.

Overall Analysis: One may ponder the question of why the Cubs may engage in this trade. The answer is that the franchise is looking to revamp their team to some degree. Their bullpen needs to be upgraded; Kirby Yates is a strong solution. The organization may also look to unload some expensive pitching contracts as well. With Jon Lester being 36 years of age, and owed $20 million in 2020, along with a team option for $25 million (or a $10 million buyout), it is logical to unload his contract, along with Kyle Hendricks who is also owed $54 million between 2020 and 2023. By including Cal Quantrill and Joey Lucchesi in this proposed deal, the Cubs also have two promising pitching prospects.

The Cubs also receive a strong veteran option at first base in acquiring Eric Hosmer and Wil Myers is a short-term solution to rightfield. The other major component that makes this trade viable is the addition of $30 million in cash, which offsets the contracts of Hosmer and Myers to some extent, and Hosmer has an opt-out clause after the 2022 season.

Overall, this blockbuster trade is beneficial to each franchise immediately. For the Padres specifically, this solves two significant needs on the roster and provide a veteran, championship pedigree to a young core of players.

Nicholas Fichtner is a baseball analyst and researcher, and Founder and Editor of The Launch Angle. His previous experience includes working as a Quantitative Analyst with the Northeastern University Huskies baseball program for the 2019 season. While in this role, he worked closely with the coaching staff in developing an analytics department that assisted in impacting overall strategy and player evaluation using advanced data analysis and metrics.
​
Before Northeastern, Fichtner served in previous roles with the Hyannis Harbor Hawks of the Cape Cod Baseball League as an Assistant General Manager consulting on in-game strategy, roster management, and quantitative based player development, and as a Student Director of Analytics with his alma mater, Endicott College and their baseball program. His Thesis, entitled "Free Market Navigation in Major League Baseball," details the development of a highly sophisticated model that accurately predicts free agent player salaries based on various quantitative variables. He currently resides in Beverly, Massachusetts.
Tags: A.J. Preller, Eric Hosmer, Padres 2020, Padres Cubs Trade, Padres MLB, Padres Trade, Wil Myers

Dumbest trade by far. We don’t need those bums
Trade for superstars or stay the course

Hosmer had a good year last year.get rid of preller ,he has no clue .trade the old guys for young guys trade the young guys for old guys , what the f is go is going on. Tommy Pham is still hurt.5 second basemen no catcher.gave away good young talent for what ,ifs and maybes.fire preller today before this trad is made.

There is **no way** the Cubs make this trade.

Well sheltered in place so why not. This proposal is the proverbial moving chairs around on the Tittanic. From the Cubs perspective the only upgrade is Kirby but only for a season. Wil does provide more offense than Jayson (last 4 years in WRC+ Will is tops in 3 of them and even in the 4th) but what gets Jayson a higher WAR is better defense. For arguement sake let’s say they are a wash. Outside of Kirby, the Cubs would gain control on a back end starter (Quantrill). Lucchesi and Kendrick have the same control and while this would… Read more »