The Padres had a roller coaster year in 2019, but it goes down as one of the most memorable in franchise history.

Before we get too far into this “year in review,” it’s understandable to be scratching your head wondering how a year where the Friars lost 92 games could possibly be one of the most memorable ever.

This year was more than just the win-loss record.

First, let’s rewind back to February. The MLB offseason was in a deep freeze with many high profile free agents still unsigned as Spring Training was mere days away.

Bryce Harper and Manny Machado, the two most significant bats on the market last year, were still in search of their next home heading into February. All of a sudden, the Padres entered the mix for both sluggers, each commanding a $300 million contract. Padres fans are used to having the Friars part of big-time rumors with disappointing results.

A shock-wave was sent through the entire baseball world when Manny Machado, who was fresh off of helping the rival Los Angeles Dodgers win another National League pennant and appear in the World Series, signed with the San Diego Padres.

The decision surprised many, even some inside of the Padres’ front office. It had the entire baseball world saying “The Padres? Really?!” Not only did he choose the Friars of all teams, but the Padres, who were notorious penny-pinchers, signed Machado to a deal that briefly held the title of largest free-agent contract in North American sports history. Yes, the Padres did that.

It was a fun day to be a Padres fan, perhaps one of the best during an offseason.

San Diego brought in a bona fide superstar. A four-time All-Star and two-time Gold Glover who oozes swagger and confidence and embraces the spotlight. These are not words used to describe many Padres’ players before the arrival of Machado.

Machado did not have a career year in San Diego, but he became the first Padres’ third baseman to hit 32 home runs since Ken Caminiti. He was second only to Fernando Tatis Jr. on the squad with 3.1 WAR and 109 OPS+. He played a stellar defensive third base and filled in gracefully in Tatis’ absence for part of the summer at shortstop.

Machado also should be given partial credit for Tatis’ skyrocketing to stardom as he took the young phenom under his wing and embraced the leadership role.

Speaking of Tatis, another memorable aspect of 2019 was his astronomic rise as one of the most exciting players in all of baseball. The infielder impacts the game in every possible way. He can hit for power (22 home runs), average (led the team at .317). He can take the extra base and put pressure on pitchers and catchers with his speed, as he stole 16 bases and scored 61 runs in just over half a season of work.

The young Dominican put his defensive skills on display on almost a nightly basis.

Fernando Tatis Jr. jumped approximately 300 feet in the air to catch this pic.twitter.com/iwKcKqUGN4

Unfortunately, his season was cut to just 84 games, given two significant injuries. However, the excitement and buzz he created in the clubhouse, the ballpark, and the city of San Diego went beyond just his feats on the baseball diamond. A healthy Tatis in 2020 could mean big things for the Friars. The young infielder is expected to be an All-Star, perhaps even in the MVP race and part of a much improved Padres team that wants to play meaningful games in September.

The Padres have not had a rookie make this kind of splash and bring this much national attention and excitement for a long time.

Tatis was not the only Friar rookie to make waves nationally. Starting pitcher Chris Paddack burst onto the scene with a dominant first month, with a 1.91 ERA in six starts. Off the field, he also made a splash with his “feud” with now National League Rookie of the Year Pete Alonso of the Mets. Alonso won April’s Rookie of the Month, and Paddack didn’t like that and let the media know about it. He then proceeded to dominate Alonso during their meeting in May.

Chris Paddack's 11Ks from Last Night (in under 20 seconds). ? pic.twitter.com/1Kb4cZCuHn

Paddack finished the year with a solid 3.33 ERA and 127 ERA+ in 26 starts and was head-and-shoulders better than any other Padres starting pitcher. Paddack was limited in his innings as the Padres were very cautious with him, just a few years removed from Tommy John surgery. 2020 will mean an unleashed Paddack, and that should scare the entire National League.

Kirby Yates turned in perhaps the most dominant season by any Padres reliever. He was San Diego’s lone All-Star in 2019. His 358 ERA+ dwarfs any single season by Hall of Famer Trevor Hoffman. He led the major leagues with 41 saves and stifled batters to the tune of a 1.19 ERA. For a good chunk of the season, Yates was nearly unhittable.

Another record broken ?@Padres pitcher Kirby Yates has the most saves before May 1st of all-time! pic.twitter.com/eIA22T5MUI

Yates was overlooked for the Trevor Hoffman National League Reliever of the Year award in favor of Josh Hader. Major League Baseball somewhat made up for it by naming Yates to the inaugural All-MLB team.

Padres get a new manager

On September 21st, the Padres decided to move on from Andy Green after four seasons at the helm and a record of 274-366 (.428). In late October, the Friars found their new skipper in Rangers assistant coach Jayce Tingler. Tingler has been hired at a crossroads in the rebuilding process for San Diego. The time for gathering draft picks and minor league talent is over, and the time to build a winning major league team has come.

Tingler has his work cut out for him as he is expected to lift this Friars team towards .500 and contention, despite the 70-92 record last year. Ownership has hinted at wholesale changes in the front office if the Padres do not become better contenders in 2020. Tingler and Preller are attached at the hip, for better or for worse. 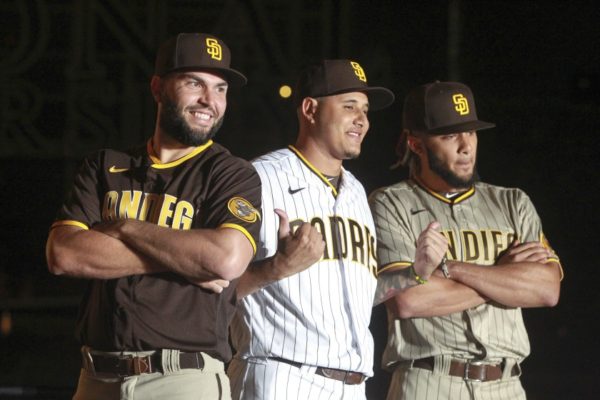 The culmination of a year of change and optimism came when the Padres finally, at long last, brought back the brown on November 9th. It was met with almost unanimous praise from Padres fans everywhere. The big reveal at Petco Park was a booming success with thousands of Padres fans buzzing around the park in excitement. The Padres nailed the presentation, the color scheme, and uniform design.

2020 has the potential to be very memorable, but for now, 2019 will go down as one of the most memorable in franchise history.

Native of Escondido, CA. Lived in San Diego area for 20 years. Padres fan since childhood (mid-90s). I have been writing since 2014. I currently live near Seattle, WA and am married to a Seattle sports girl. I wore #19 on my high school baseball team for Tony Gwynn. I am a stats and sports history nerd. I attended BYU on the Idaho campus. I also love Star Wars.
Tags: Andy Green, brown, Bryce Harper, Chris Paddack, Fernando Tatis Jr., Jayce Tingler, Manny Machado, MLB, Padres, San Diego Padres

A combination of Kevin Towers and A.J. Preller equal a tremendous Padres GM