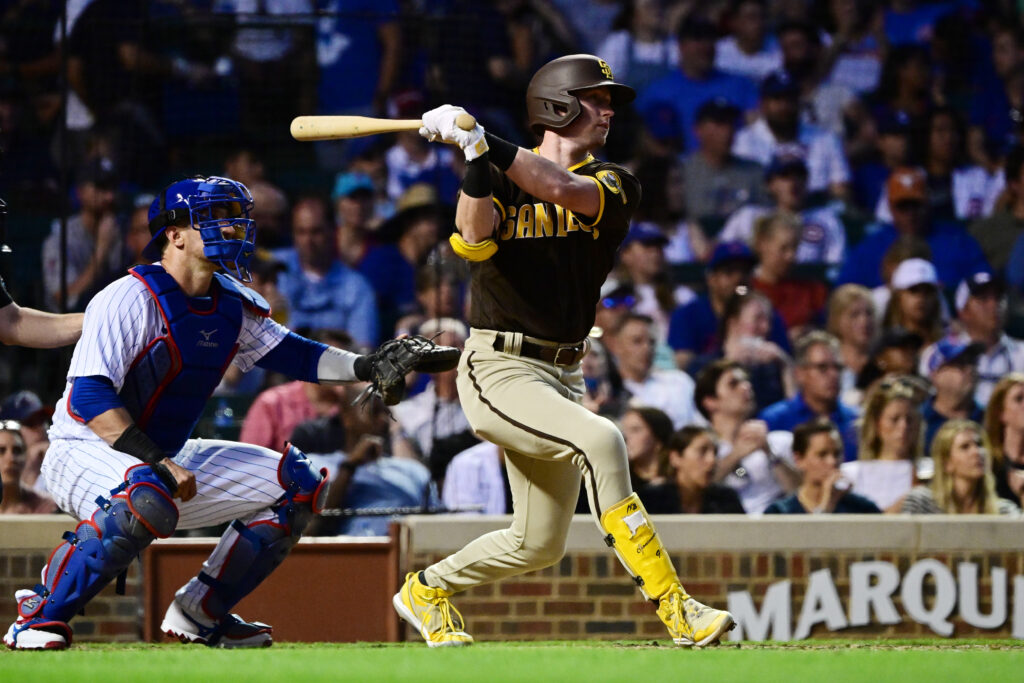 Thursday, Major League Baseball announced the finalists for the coveted Silver Slugger Award at each position.

The Padres have five players who finished the season in brown and gold who are up for a possible Silver Slugger Award.

The Silver Slugger is awarded to the top hitter at each defensive position.

Obviously, some have a better chance of winning the award than others. The competition is stiff. Let’s look at each finalist’s chances of bringing home the hardware.

Being a designated hitter, by default, means you can swing the bat well. Bell certainly burst onto the scene early in the 2022 season. In 103 games with the Washington Nationals before the trade to San Diego, he hit .301 with a .877 OPS, which are All-Star caliber numbers. If he continued that trend in a Padres uniform, he likely would have been the runaway winner of this award.

However, we know that isn’t the case. Unfortunately, he bottomed out after arriving in San Diego, displayed by his .192 average with a putrid .271 slugging percentage. His strikeout rate spiked from 14 percent to 19.5 percent in San Diego. He was virtually listless at the plate for much of the final two months of the season.

Plus, his competition did not sleep.

Can the heads prevail over hearts among voters? Major League Baseball’s managers and coaches will decide the winners. If they let their hearts decide, Albert Pujols, in a dream-like swan song of a season, will win it. Frankly, even when disregarding the Disney movie-like run he went on, his overall numbers make a strong case. His 24 homers, .859 OPS, and 154 OPS+ are as strong as any in the DH field. Not only that but how can you deny the man his award after finishing his career with 703 home runs?

With a minimum of 350 plate appearances, Pujols led all the finalists in wRC+ and OPS.

Many Padres fans were sad to see slugger Luke Voit leave town as a result of the Juan Soto trade. His production dipped once leaving San Diego. Even still, he finished with 22 homers, a .710 OPS, and 106 OPS+.

Justin Turner seems to merit a nomination due to either lack of depth at DH around the National League or by name recognition. He hit 13 home runs with a pedestrian .788 OPS.

The award requires a player to appear in at least 100 games. Harper played 99, thus, he may be disqualified.

Even with some ups and downs, Cronenworth finished the season with decent numbers, considering his defensive position. Second base is normally considered a light-hitting spot. He ended with a .240 average, 17 home runs, a .727 OPS, and 110 wRC+.

Among the five finalists, Cronenworth ranks first in home runs and RBI. However, he ranks third in wRC+, fourth in batting average, and last in OPS.

McNeil seems to possess the strongest case. He won the National League batting title this season with a .326 average. Coupled with an .836 OPS and 143 wRC+, he will be tough to beat out.

Wong turned in a strong season with a .770 OPS. Elsewhere, Rogers hit .266 but was light on the power numbers, despite playing at Coors Field. Marte battled injuries for a portion of the season but still hit 42 doubles.

The case has been made for Machado to possibly win National League MVP. If he is one of the prime candidates for that prestigious award, one would think he is nearly a shoo-in for the Silver Slugger among NL third basemen. However, the competition is nearly as fierce.

Arenado is a fine third baseman as well, one of the best of this generation, like Machado. However, the only significant offensive category where Arenado bested Machado was RBI by one.

Austin Riley led all major league third basemen with 38 homers. However, Machado and Arenado edge him out in most other categories.

Machado deserves this award. However, as we saw with him not being named a Gold Glove finalist, there is nothing guaranteed.

This is a tricky one. First, Soto won back-to-back Silver Sluggers in 2020 and 2021, both before his 24th birthday. He clearly is one of the elite hitters in the entire game, especially among outfielders. There are three Silver Sluggers given out to outfielders in each league.

Despite Soto’s reputation, he endured the most turbulent season of his young career. Early on, he started out slowly. He entered the 2022 season as a lifetime .301 hitter. Yet, he hit .246 during his time with the Nationals this season. Then it worsened to an overall season average of .242 after his 52 games with the Padres. This is by far his worst year in the batting average department. Some of that is chalked up to his life being uprooted midseason and switching coasts.

However, the other numbers mostly remained in tact. He finished with 27 homers, a .853 OPS, and 149 OPS+. He led the entire league with 135 walks. The former batting champion led all NL outfielders in on-base percentage (.401) and finished third in OPS among the outfield finalists. His 145 wRC+ also was the best among outfielders in the National League.

Since there are three silver bats given to outfielders, Soto has a good chance of hearing his name called. Only Mookie Betts and Joc Pederson had a better OPS. Soto also finished fourth among finalists in fWAR.

They likely will give one to Schwarber, even with his non-home run numbers being less-than-stellar. It’s hard to ignore the fact that he led the entire National League with 46 bombs.

Drury came over to the Padres midseason to add some thump. His first at bat as a Padre was a grand slam. He finished the season with 28 homers and an .813 OPS.

McNeil is also listed at second base after winning the NL batting crown. He might come home with two.

The winners of the Silver Slugger Awards will be announced on November 10.

Native of Escondido, CA. Lived in San Diego area for 20 years. Padres fan since childhood (mid-90s). I have been writing since 2014. I currently live near Seattle, WA and am married to a Seattle sports girl. I wore #19 on my high school baseball team for Tony Gwynn. I am a stats and sports history nerd. I attended BYU on the Idaho campus. I also love Star Wars.
Tags: Jake Cronenworth, Josh Bell, Juan Soto, Manny Machado, MLB, Padres, Silver Slugger

Is Seth Brown the answer for the Padres?