Between Cordero and the next guy on this list, it will be a competition to see who is up with the big league club the longest. On Wednesday, it was announced Cordero would replace Margot on the roster after Margot was placed on the disabled list. This will be Franchy’s second stint with the team after he hit .228 with three home runs and three triples in 30 games last season. He raked in El Paso to the tune of a .326 average and 17 home runs last year.

All he needs to do to stay on the roster is cut down on strikeouts. In a small sample size at the big league level, he had an astronomical strikeout rate of 44.4%. In a very small sample size of four games this year in El Paso, it seems he has at least improved slightly in that department. Cordero has all the tools one wants in an outfielder and they have been on display at times. He brings some questions but a lot of upside and potential to the Padres’ outfield.

Lucchesi may be here to stay in the Padres’ starting rotation, especially after Tuesday night’s performance against the Rockies in Denver when he pitched six innings and struck out eight, earning his first big league win. He has made three starts for the Padres with a stellar 1.72 ERA and 16 strikeouts with just four walks. His deceptive lefty move has served him well early on.

He certainly earned his right to be in The Show after a very strong spring, where he posted a 1.54 ERA in four games. He could emerge as a strong point of the starting rotation, especially in the absence of Dinelson Lamet. If Lucchesi continues to pitch well, when Lamet returns, the Padres may eliminate a weaker starter and all of a sudden have a solid young core in their rotation.

2018 goal: Try to replicate what he did Tuesday against the Rockies every time

Allen turned in a strong 2017 between Fort Wayne and Lake Elsinore, posting a 2.95 ERA with 142 strikeouts in 24 games. He pitched 125 innings, which was the most by far he had ever pitched, and still maintained solid numbers. He has a good changeup that earned him a 9.1 K/9 rate last year and for his career, it’s at 9.7 K/9.

In his first start of 2018 for San Antonio, he pitched five solid innings, allowing just one run and six strikeouts. At age 20, he certainly has time to figure it out and is now at the highest level he has ever pitched at. There will be a learning curve, but Allen has shown he can adjust and pitch at every level.

Espinoza came from the Red Sox with much fanfare after the Padres dealt All-Star Drew Pomeranz. In no fault of his own, it has been very disappointing so far, due to injury. The potential is off the charts, with three pitches rated average or better with a high-90s fastball. He hasn’t pitched professionally since August 31, 2016. He has made just eight appearances as a member of the Padres’ organization, for Fort Wayne, before his injury. He had a 4.73 ERA with 28 strikeouts in 32 1/3 innings.

He certainly has a long road ahead of him, but there seems to be some light at the end of the tunnel. The latest reports have him starting up during this upcoming fall instructional league. The Padres are in no hurry to rush him as they hope he can be a top-half of the rotation starter in the coming years.

2018 goal: Get healthy and prepare for fall league

We are getting to some big arms now. Morejon was plucked from Cuba in July of 2016 by Preller and has performed at every level so far. He ended last season in Fort Wayne, where he made six starts with a 4.23 ERA. He had a 3.86 ERA in 13 total starts last season. With good command of his fastball and two average-to-above average secondary pitches, Morejon could shoot up the system soon. Just barely 19 years old, he has plenty of time, but he may not need it.

He has already made one start for the Storm this season, going 3 2/3 innings and striking out five while allowing just one run. They will slowly ramp up his workload as he pitched just 63 innings in his first year of pro ball last season.

Baez can bring it, there is no doubt about that as he has been clocked at 99 MPH. He is an imposing figure on the mound at 6-8 and with the combination of his size and velocity, he intimidates hitters. It showed last season between the Arizona League and Fort Wayne as he struck out 89 batters to just 10 walks in 63 2/3 innings. At worst, he projects as a dominant bullpen arm, but it looks as if the Padres will continue to see him out as a starter.

He has not come out of spring training yet with a back issue. He will get a late start to the season, and Lake Elsinore is a likely destination. Last season was his first year of pro ball in the United States, but since he is 22, if he continues this trend, he could move quickly through the system. 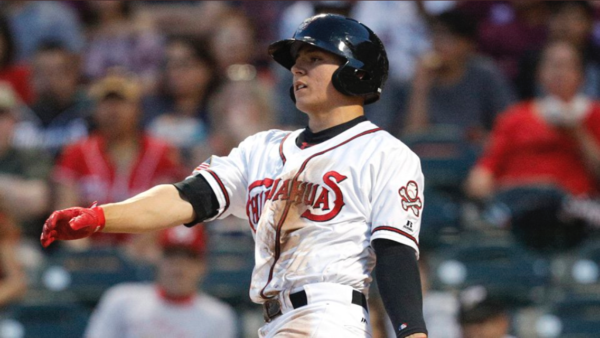 Quantrill comes into the 2018 season as the second-highest rated prospect in the Padres’ system and is rated the 40th-best prospect in all of baseball. He is still ramping it up, two years removed from Tommy John surgery. He pitched in three levels in 2016 and another two in 2017, finishing with Lake Elsinore. In 2017, he made 22 starts with a 3.80 ERA and 110 strikeouts in 116 innings. He has a decent fastball that is complimented by a wicked changeup.

He now gets his second crack at Double-A after starting eight games for the Missions last year before heading back down to Lake Elsinore. In two starts so far this year, he has been impressive with a 1.86 ERA in 9 2/3 innings. He will need to work on his control if he is to continue his quick ascent up the Minors.

Not counting the two players on this list who have already made it to the big league club, Urias seems to be the most major league-ready of the whole lot. He showed elite patience at the plate in his time with the big league club during spring, posting a .394 on-base percentage in 16 games. As far as being a disciplined, controlled batter at the plate, it would be tough to find more than one or two better than Urias in all the farm systems across the league. He is rated the 36th-best prospect in all of baseball, including the second-best second baseman.

Urias hit .296 for Double-A San Antonio as a 19-year-old last year. So far through six games in Triple-A, it’s the same old Urias, who is batting .400. He isn’t one to take you deep, just 10 home runs in over 300 Minor League games, but that’s not what Urias brings to the table. There is so much value in guys who work the count and get on base consistently, and that’s what Urias does. He may hit his way right onto the Padres’ roster before the calendar turns to summer, and even sooner if there is an injury in the Padres’ infield.

Gore may be the most exciting pitching prospect in all of baseball. Armed with a distracting delivery and three or four plus pitches, Gore could be a fast riser. In his first taste of pro ball last year in the Arizona League, he didn’t disappoint, with a 1.27 ERA and 34 strikeouts in seven starts. He was the Padres’ third overall pick last year and is now the number one-rated lefty pitcher in all of baseball and the 19th-best overall prospect.

Gore has great command and seems to have the mettle to be a big leaguer. Now in his first year of full-season pro ball, he looks to validate his lofty expectations. In his first start for Fort Wayne, he struck out four in three innings and shook off some understandable nerves, as he barely turned 19 two months ago. If he dominates Fort Wayne, look for a quick promotion to Lake Elsinore. Gore has the stuff the Padres need in a future playoff-caliber rotation.

The prospect a majority of Padres fans are the most excited about is Tatis. He needs no introduction to San Diego fans. He has all the tools you want in a shortstop; good bat, power, speed, range, and arm strength. He hit his way up to Double-A last season at just 18 years old. Now 19, he gets to start in Double-A and perhaps turn in a full season there. Although exciting, Tatis Jr., like any prospect, is far from perfect. In his 117 games in Fort Wayne, he had a 23.9% strikeout rate, and that hiked up to 29.8% in his brief 14-game stint with the Missions to end the season.

The Padres aren’t going to rush Tatis, who still isn’t polished, although wildly talented, and has accomplished much at the lower levels. He now is getting into the higher, tougher leagues and will have a target on his back as a top 10 overall prospect in baseball (#8).

2018 goal: Strike out less than 23% while maintaining power numbers

Native of Escondido, CA. Lived in San Diego area for 20 years. Padres fan since childhood (mid-90s). I have been writing since 2014. I currently live near Seattle, WA and am married to a Seattle sports girl. I wore #19 on my high school baseball team for Tony Gwynn. I am a stats and sports history nerd. I attended BYU on the Idaho campus. I also love Star Wars.
Tags: MLB, Padres, Padres Prospects, Padres top 30 Prospects, San Diego Padres
Pages: 1 2 3

3 thoughts on “Where the Padres Top 30 Prospects Are Starting, and Goals For Each”