The first three outings of Cal Quantrill’s major league career were inconsistent, and hitters made consistent contact with his pitches. In his most recent start against the Blue Jays he showed increased confidence in all of the pitches in his arsenal, mixing and matching them in a way he hadn’t previously done at the major league level. Let’s take a look at how he specifically did this, and made other key adjustments to his pitching.

While the focus of almost everyone’s attention surrounding Saturday’s game was understandably on the seven home runs the Padres hit, the pitching of their Canadian right-hander in his homeland should also be noted.

Following a few starts in which he had many long innings and pitched decently, Cal Quantrill showed his best stuff on Saturday. The key to his success? Using a more balanced mix of the pitches he has to offer.

Although the box scores of his first two starts show him to have better results, there were a lot of positives to be taken away from his outing in Toronto. In many ways, he actually pitched better in the game than in each of his previous starts.

Here are the numbers on the pitch usage patterns he’s had throughout his four starts, as well as the whiff rates Quantrill generated with those pitches: 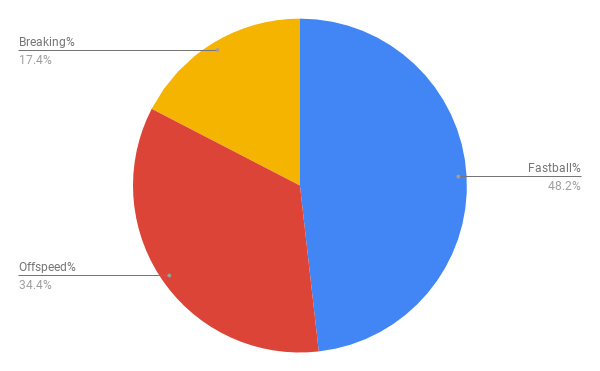 In his big league debut he relied heavily on his Fastball and Changeup, while occasionally mixing in his Curveball and Slider. This was a theme that continued throughout his next couple starts. Quantrill didn’t have very good feel for his breaking balls in the start, as this chart of those pitches shows: 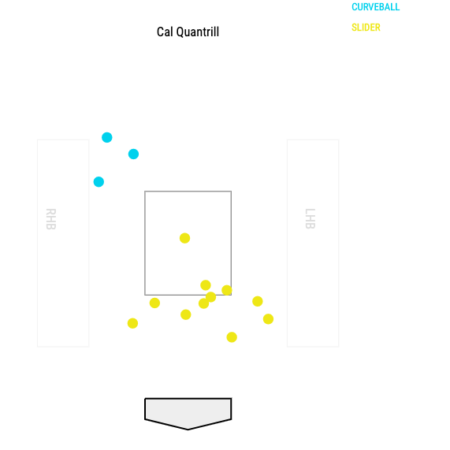 His curveball just wasn’t there, and his slider was better but not located well enough for him to reasonably have a significant amount of confidence in the pitch. Thus, it’s not hard to see why he relied on his Fastball and Changeup more in this start. Furthermore, his Fastball and Changeup have always been his best pitches — which is yet another reason for him to rely on the two pitches above any others. Despite using his breaking balls less than any of his other pitches, the Braves didn’t manage a single hit on Quantrill’s breaking balls in this game. 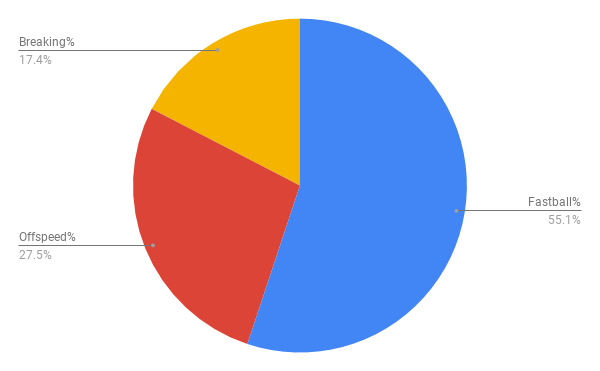 This outing saw Quantrill show increased usage of his Fastball, with continued reliance on his changeup as he did in his first start. His fastball and changeup were effective, as he only gave up average exit velocities on the pitches of 85.4 mph during the outing. Unfortunately the right-hander’s slider was barreled up for two hits with average exit velocities of 108.6 mph. While the first start inspired confidence in his slider, it seemed hard to be optimistic about using the pitch more often considering the results. 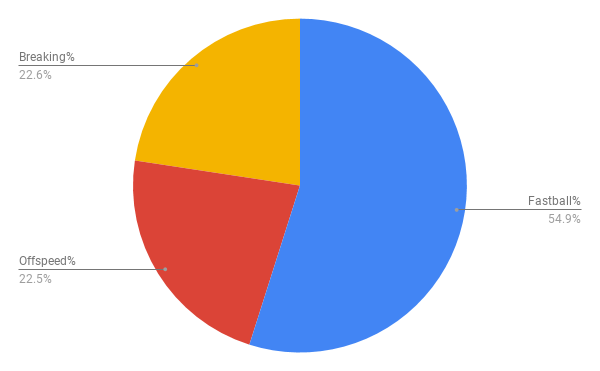 Now in this start Quantrill used his breaking ball more often, while using his Fastball almost exactly as often as he did in his previous outing. He simply cut his usage of the changeup in the game, and only gave up a single hit on his breaking balls. While the results of his usage of breaking balls were good, the average exit velocity on such pitches was a concerning 90.6 mph. 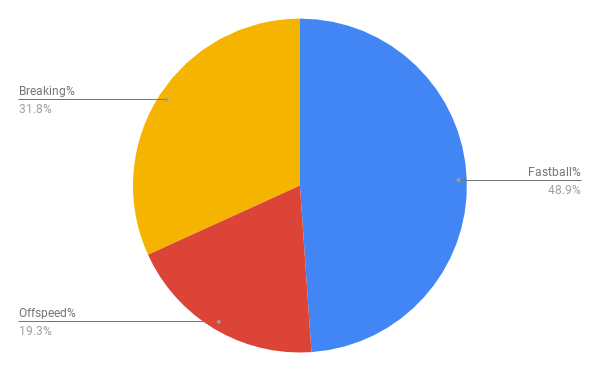 What’s interesting about this start is that he threw his fastball less frequently than in his previous two starts. Even more intriguing is the fact that he used his slider as often as he did. In this outing he decided to cut his usage of both his fastball and changeup in order to throw his slider with more frequency. As we can see in the number of whiffs induced by Quantrill in this outing, his use of more breaking balls helped all of his stuff play up. While his breaking ball whiff percentage is 13.7 percent here, it’s key to note that this number is weighed down by the lack of whiffs on his curveball. His slider generated whiffs at a rate of 27.3 percent. That’s a result which certainly provides evidence of the viability of his slider.

It’s always been well-known that Quantrill has a good fastball and changeup combination, and thus the development of his slider is key to his success. In his outing against the Blue Jays recently, he used his slider more than he ever had in the big leagues thus far. Based on the whiffs he induced when using a more balanced variety of his pitches, Quantrill should certainly continue to throw his slider with confidence. The Padres don’t have many other options outside of the Canadian righty to slot into their rotation, so Quantrill will continue to get chances at the big league level this season. As his last start showed us, an increased use of his slider should go a long way towards helping him be a solid starting pitcher for San Diego.

A sophomore at Willamette University in Oregon, Conrad is majoring in Spanish but is also a writing center assistant for other students at Willamette. He has been a Padres die-hard his whole life and hopes to bring comprehensible statistical analysis to the site.
Tags: Cal Quantrill, Padres 2019, Padres MLB, Padres Quantrill, San Diego Padres