Between Jose Pirela, Cory Spangenberg, and Carlos Asuaje, the San Diego Padres have a group of second basemen who are playing under league average in many categories. With Luis Urias lurking in the weeds, this trio has limited time to prove their worth to Andy Green and the Padres. What will be the end result for these men?

This season, the Padres have trotted out a number of players at the second base position, largely spreading the playing time between Jose Pirela, Carlos Asuaje, and Cory Spangenberg.

Having three position players who largely play in the same place is pretty odd, but the Padres are currently doing just that.

The problem is that the three players mentioned haven’t been very productive at the position for the team.

Take a look at the statistics.

All stats compiled by the trio courtesy of Fangraphs:

None of the three have been very useful in their roles for the team, as the data above indicates. An average wRC+ is about 100, so all of them have been below average in comparison with other hitters in the major leagues. Only Spangenberg has a barely positive WAR figure, meaning he’s the only one who’s supposed to be better than a replacement level Triple-A shuttle-type player, based on the definition of WAR.

Let’s talk about some more specific statistics to see how the trio stacks up against the average second baseman in baseball. This season, second basemen in the big leagues have had an average on-base percentage of .318. Pirela is the only one of the three who’s even close, at .307. Their average wRC+ is 93, so all of them are performing well-below the standard by that measurement as well.

To further explore their hitting, here are their average exit velocities:

For reference, the average exit velocity in the major leagues is 88.6 mph. So only Pirela is hitting the ball with more force than the rest of the league is on average. This is another sign and reason why the trio has been underwhelming all season long. Two of them also have issues being too predictable with their batted ball locations, which further exacerbates their hitting struggles.

While Pirela has done a good enough job spraying the ball around the field, Asuaje and Spangenberg have pulled the ball so much that teams have simply shifted to gobble up their batted balls with relative ease. Take a look at the Statcast locations of the fielders’ positioning against the two hitters: 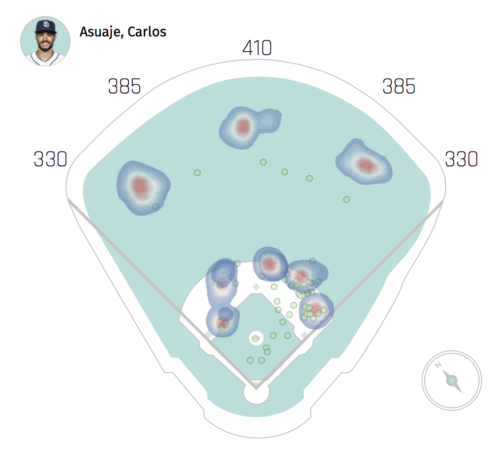 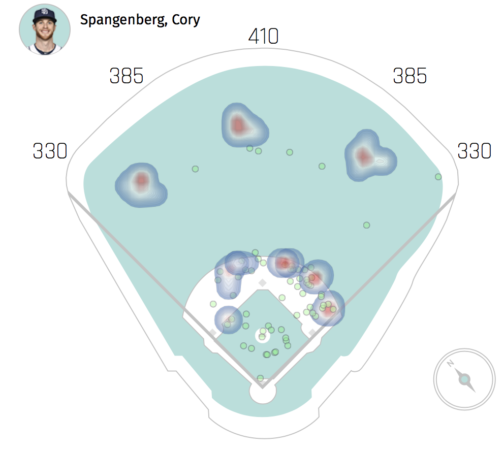 If the two did a better job of spraying the ball to all fields when they hit, they’d have a better chance of getting hits on their batted balls, because the fielders would be playing more traditionally without much of an idea of where they may hit the ball during any given plate appearance.

Perhaps the three have at least made up for their lack of offensive output by playing good defense? Unfortunately not, as all of them have been measured as having negative defensive value, according to Fangraphs. Is there a reason why they’ve struggled on defense as well? Let’s examine where the three have positioned themselves on average, to see if that data could give us a clue about their lacking defense:

This data from Statcast gives us some idea as to why the trio has been mediocre on defense. Only Spangenberg is starting deeper than the average second baseman is, in his positioning. What’s interesting is the fact that he has rated out better defensively than the other two, likely because of his deeper starting point. The average second baseman starts 150 feet away from home plate, but for some reason Pirela and Asuaje start two feet closer in. It may seem like a small difference in positioning, yet as the old saying goes, “baseball is a game of inches.” Even the slightest difference in starting point can alter a player’s chance of getting to a batted ball, so perhaps Pirela and Asuaje should consider starting deeper on the infield than they have thus far.

All-around, the three guys analyzed above have been disappointing and insufficient for the Padres in 2018. These are all players who have played well in the past — Pirela put up 2.1 WAR in 83 games last season, Spangenberg was worth 2 WAR in 2015 for San Diego, and Asuaje was worth 0.7 WAR in 2017. They all have good enough track records to continue to get chances for the Padres this season.

Though with all the prospects the Padres have in their farm system, Luis Urias for example, time is quickly running out for the aforementioned second basemen to prove themselves with the team. If these players can’t improve by the end of the year, the Padres will surely be contemplating whether to move on from the three during the offseason. Highly touted prospects will be valued more than veterans who have had multiple years of time in the major leagues, and proved to be insufficient for their roles, especially in the case of the Padres, who are rebuilding and likely more willing to give youngsters a shot at becoming impact major leaguers.

A sophomore at Willamette University in Oregon, Conrad is majoring in Spanish but is also a writing center assistant for other students at Willamette. He has been a Padres die-hard his whole life and hopes to bring comprehensible statistical analysis to the site.
Tags: Carlos Asuaje, Cory Spangenberg, Jose Pirela, Padres Second Base, San Diego Padres, San Diego Padres Second Base

Out of the 3, Spangie seems the most useful as he can square up a ball and take it out of the yard now and then. He can play 3 positions adequately and can certainly run or steal a base when situations require it, not to mention he is hard to double up. Asuaje is a banjo hitter and is a one position guy; no thanks. Pirela is in no man’s land. He flat sucks at 2b but you can’t justify a corner outfielder with almost no HR power. DFA/release him, let him get a shot for a team needing a DH.

Too depressing. But then that’s the story of drafting, like the scout who begged the Astros to take Jeter and then quit when they didn’t (to save $250,000). So hard to tell what kind of player a guy will be at 24 when you see him as a skinny kid of 18.

Long term none of the 3 have a role on the club. Urias is the 2B guy for 2019. So let their ages make the decision. Trade, DFA or non-tender Pirela (28) and Spangenberg (27). Reluctantly keep Asuaje (26) as insurance against Urias not being ready.

Pirela is easily the best of the three, but maybe performs better as an outfielder. Spangenberg’ s best position is probably third base, but Villanueva definitely deserves a shot there. Why Preller started the season with so many infielders falling over themselves for playing time, probably is due to his Hosmer mistake. Don’t forget, we started the season with three third baseman.
Pirela is still a bargain at the major league minimum, but Spangenberg is not that expensive. Pirela would probably be better as a DH in the AL as he needs his at bats to stay in the groove and to keep his glove off the field. He’s not working out as a pinch hitter. I was surprised they weren’t able to trade Spangenberg before the deadline. He would definitely benefit from regular playing time. Great speed and occasional power.
Asuaje – underperforming at bat and in the field. Pretty eyes, great in the clubhouse. Only plays one position

I was a fan of Pirela last season, but he blew his chance this year, despite an endless stream of opportunities. He’s the worst position player on a terrible team, and should be released.

Keep in mind that Spangenberg is currently in his arbitration years, and is currently being paid $1.7 million. The Padres will probably cut him to save money. Hard to believe this guy was a top 15 pick in the draft.

Asuaje is a mystery — fantastic hitter in the minor leagues, excellent clubhouse guy, but pretty horrid this year. Maybe give him another chance in 2019.

To be more accurate, Spangenberg was not only the 10th overall pick, he was picked right before George Springer (as well as Jose Fernandez, and others). It was a crazy move at the time, and never got any less crazy.