With it being Valentine’s Day, it’s time to address some relationship issues with some of our favorite San Diego Padres players.

I am not talking about their life off the field. I am talking about statistics that some players need to break up with in 2018. Others need to embrace these stats and have a happy life together. If the Padres want to improve on their 71 wins from 2017, some changes need to be made. Here is some love doctor “relationship guru” advice for the team on this day of love.

Let’s first take a look at some break-ups that need to happen:

The teams’ strikeout rate has been naughty and has gone around the Padres’ clubhouse. It has the strongest hold on Wil Myers, Hunter Renfroe, and Opening Day roster hopeful Franchy Cordero. It’s time for these Padres to say “no more” and break it off clean. Myers’ strikeout rate was a career-worst 27.7% last season. Renfroe and Cordero were at 29.2% and 44.4%, respectively (take Cordero’s with a grain of salt as he played in just 30 games, although still very concerning).

The strikeout rate has got to go. During spring training, this trio needs to focus on making contact and growing their knowledge of the strike zone. Nothing good happens when you strike out. Just put the ball in play and see what happens. It’s time to get into a healthier relationship with the walk rate. Myers actually flirted with that rate to the tune of 10.8%, a respectable number. Renfroe was nearly half that at 5.6%, and Cordero at 6.1%.

It’s time for these players to put themselves in a relationship that can help them succeed, not one that drags them down. Getting on base and putting the ball in play is one of the most vital parts of any successful offense.

For the most part, Dinelson Lamet’s rookie season was a honeymoon for the Padres. He had the most strikeouts per nine innings (10.9) of any rookie starting pitcher last season. He truly has the stuff to be towards the top of this rotation, if not the de facto ace. 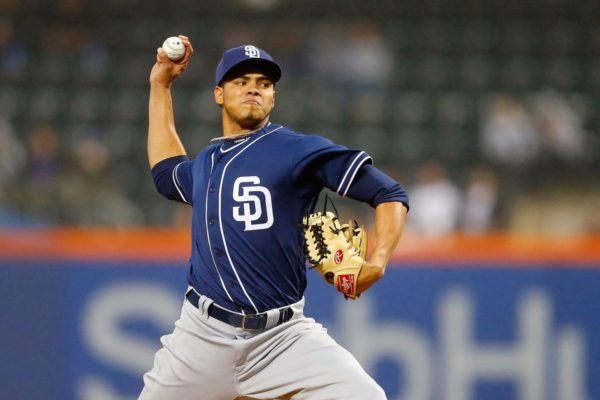 If he can break up with his 4.3 walks per nine innings rate, he could be one of the best young pitchers in baseball. Walks will happen, but even if he can approach Clayton Richard’s 2.7 BB/9 rate, his other numbers would improve drastically. It’s a much healthier relationship.

In this age of baseball, chicks might also dig keeping the ball on the ground and pitching to weak contact. If Maton wants to be a staple in the bullpens of the future, he will have to break up with his home run rate.

Now let’s take a look at some pairs that should see each other more often or even get back together:

Getting on base is a vital part of any offense that wants to put up a ton of runs. Hedges certainly holds his own defensively as the advanced metrics have him as one of the best in the game behind the dish. Catchers don’t have as much pressure to find those beautiful, slender .300 averages and 30 home runs. Hedges needs to use his charm and pick himself up an on-base percentage that vastly improves his .262 clip in 2017. James McCann is a perfectly average hitting catcher for the Tigers. His on-base percentage was .318 last season. Even Erick Aybar managed to have a .300 OBP last season.

Hedges and a .300 OBP would be perfect together. He doesn’t have to carry this offense, but he also can’t be a liability. I am counting on him to learn from the mistakes of previous relationships and thrive in this one.

Freddy Galvis and His 2016 Glove

Galvis normally has a good relationship with his glove. An infielder must be one with his glove in order to be consistent at the big league level. Galvis has a track record of being solid at shortstop, which  is one of the reasons A.J. Preller traded for him. He lost his way a bit last year. It’s unclear whether or not he and his glove had a fight, but he posted a -5 Defensive Runs Saved at short, the second-worst of his career.

He and his glove need to get some counseling and rekindle that fire of the 2016 season when they enjoyed a +5 Defensive Runs Saved, a whole 10-run difference from last year. The Padres are hoping he can improve on Erick Aybar’s -4 mark last year at that spot. Galvis and his glove seem good together, they just need a bit of help.

Margot is turning into perhaps the best overall athlete on the Padres’ roster. He has a bit of pop (13 home runs), a possible Gold Glove in center field (+8 DRS), and speed (17 stolen bases). It’s time to reach a new level in the relationship. It’s time for Margot to reach that 20 stolen base plateau. Margot has 20/20 tools (20 home runs and 20 steals in one year). Let’s take this slow and set a goal for 20 steals first.

Stolen bases, to some, might be getting obsolete, but a lot more players stole 20+ bases in 2017 than in 2008. They are still valuable. It can change the whole complexion of an inning, especially with fewer than two outs. If Margot makes a conscious effort to meet and court 20 stolen bases, the Padres will find themselves with more opportunities to score runs in 2018.

Richard and 30 starts have seen each other before. Richard needs to knock on the door with roses and offer up his heart once again in 2018. Richard is the clear leader in the clubhouse of this pitching staff, and perhaps the whole team. Reaching at least 30 starts would be a great way to show these young pups in the rotation what it means to show up every fifth day and compete, even when you don’t have your best stuff.

Richard made 32 starts in 2017 and even had two complete games, which amazingly tied for the best in the National League. He also reached 30 starts in 2010 and 2012, both with the Padres. He needs to set the standard and have the model relationship the other pitchers should strive for.

Native of Escondido, CA. Lived in San Diego area for 20 years. Padres fan since childhood (mid-90s). I have been writing since 2014. I currently live near Seattle, WA and am married to a Seattle sports girl. I wore #19 on my high school baseball team for Tony Gwynn. I am a stats and sports history nerd. I attended BYU on the Idaho campus. I also love Star Wars.
Tags: Clayton Richard, Dinelson Lamet, Hunter Renfroe, Manuel Margot, MLB, Padres, San Diego Padres, Wil Myers

Padres swept after 8-7 loss to Rockies

3 thoughts on “Valentine’s Day Special: The Padres’ Love Doctor Is In”