The banners overlook the concourse behind the first-base dugout, watching over the beautiful grass of Fowler Park.

On one, Brian Matusz, the 2008 National Pitcher of the Year, readies to deliver a fastball. On the other, Kris Bryant, the 2013 winner of the Golden Spikes Award (college baseball’s Heisman) and now one of the best three or four players on the planet, amps up for another home run hack.

The two serve as a reminder of the talented history of the baseball program here at the University of San Diego, greeting past, present, and future Toreros as they make their way through the facility.

Athletics here at Alcalá Park are noticeably uninspiring most of the time. Basketball is in the middle of a an all-encompassing rebuild. Football, while successful on the field, competes at the FCS level and, by not handing out scholarships, puts itself at a serious disadvantage against most of the country.

For local fans, then, the exception to this mediocrity becomes the school’s ongoing baseball brilliance.

Matusz and Bryant remain the most noteworthy of Torero alums in the majors, but a quick perusal of past rosters reveals other big league names, including Rangers righty A.J. Griffin and Nationals southpaw Sammy Solis, as well as recent first-rounders Connor Joe and Kyle Holder. In all, the Toreros have had 44 players sign professional contracts in just the last eight years, an extremely impressive amount for a non-Power Five school.

Outside of bringing the school popularity in major league clubhouses, that talent also makes an impact on the field on a regular basis. The Toreros have put together a strong 612-426-3 record since head coach Rich Hill took the helm in 1999, achieving a national ranking in each of the past eleven seasons and claiming five West Coast Conference titles. It all adds up to a reputation among baseball minds as one of the top programs on the entire West Coast.

This year, it’s safe to say, will be no different.

Picked as the preseason favorites to win another WCC title in 2017, and led by first-team All-American catcher Riley Adams, the team appears to be a force to be reckoned with yet again. “This group is right there among the best we’ve ever had,” says Coach Hill. “They’re tough, they’re smart, and they’re not afraid of anybody, which is important given our out-of-conference schedule.”

Finding success while playing out that tough schedule will be essential to the Toreros having a chance at making their first-ever trip to Omaha for the College World Series. “I don’t think there’s a more challenging schedule in Division 1 baseball across the United States of America,” muses Coach Hill when asked about the team’s upcoming slate.

He may be right.

The team opened their season this weekend with a three-game series against sixth-ranked Vanderbilt, who carries two players projected to be selected in the top five picks of the MLB draft this summer in athletic center fielder Jeren Kendall and high-ceiling righty Kyle Wright. Next weekend will bring right-hander Peter Solomon (Notre Dame), middle infielder Keston Hiura (UC-Irvine), and southpaw David Peterson (Oregon) to Alcalá Park for the Tony Gwynn Classic, while the rest of the season will allow hometown fans to catch a glimpse of pitcher Connor Seabold of Cal State Fullerton and two-way player Luis Gonzalez of New Mexico, both of whom are also included in Baseball America’s Top 100 draft prospects.

Future major leaguers aside, the Toreros will take on the nationally-ranked likes of LSU (#3), Cal-State Fullerton (#14), Long Beach State (#28), and Tulane (#33) over the course of the 2017 season, while almost all of the rest of their scheduled opponents (including Michigan, New Mexico, Oregon, USC, UC-Irvine, and UCLA) are also already receiving votes in the national rankings. This leaves out a WCC slate that features Gonzaga, BYU, and last year’s regional representative, St. Mary’s. 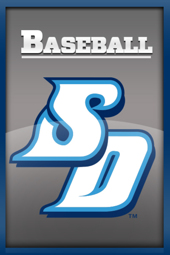 USD is certainly a popular pick to regain their throne atop the West Coast Conference, and will be in the mix all year long as far as the national rankings go.

As for the players taking the field, there is certainly no shortage of talent for the Toreros. The team will be led by the aforementioned All-American, Riley Adams. The homegrown backstop currently ranks as Baseball America’s #37 draft prospect, and took little time in backing up that ranking with a long homer in his first at-bat of the year this weekend. His vertical mechanics and loft-driven approach at the plate draw aesthetic comparisons to Kris Bryant himself, and his lean, 6’4” frame disguises a powerful, 225-pound body that creates noticeable pop at the point of contact, as evidenced by his .327/.443/.512 slash line from 2016.

The roster is far more than a one-man show, however.

Infielder Roman Garcia is coming off a 2016 campaign that saw him bat an impressive .313, outfielder Hunter Mercado-Hood demonstrates great patience at the plate, and Brhet Bewley has a SportsCenter-worthy glove at second base.

On the pitching side of things, the team is fronted by sophomore southpaw Nick Sprengel whose mid-90’s heat and darting off-speed offerings should continue to boost his draft stock for coming campaigns. Hard-throwing righty Johnathan Teany has the stuff to warrant a second glance from scouts, freshman reliever Miles Sandum would likely to be in the minors already if not for a bad outfield collision that ended his high school career early, and big lefty Troy Conyers, and his ability to change speeds, should allow him to carry a large workload for the team again this year out of the bullpen.

Ultimately, there will be talented players in both dugouts for every game of the Toreros’ 2017 campaign, making Alcalá Park a hotbed for hardball fans all spring. Whether they want to watch a winning ball club compete for a championship or they want to look at future big league rosters and be able to say “I knew them when…”, it would behoove fans not to overlook the little campus on the hill.

Within the collegiate jewel that is the Fowler Park diamond, and among the hazy ghosts of Bryant, Matusz, and others, a ballgame at USD may give fans far more than they could ever expect.

Noah is a current undergraduate at the University of San Diego. In addition to his classes as a Business Economics student, Noah serves as the scouting director for the nationally-ranked USD baseball team and as an NFL correspondent with The Mighty 1090. You can follow him on Twitter @thebackseatlamp
Tags: Fowler Stadium, Kris Bryant, University of San Diego Baseball Program, USD Baseball, USD Toreros