Following his debut last season, Trey Wingenter has only gotten better throughout his time in the major leagues thus far. Here’s a look at how he’s quickly becoming one of the best Padres relievers, and soon to become a premier major league reliever.

When the Padres brought up Trey Wingenter last season, he showed flashes of brilliance mixed in with a rather high number of walks.

Last season he looked like the prototypical hard-throwing bullpen righty with little control over where his pitches went. Fast forward to 2019, and Wingenter is starting to harness his hard fastball and biting slider. That’s an unfortunate reality for opposing hitters.

On the surface, many of his statistics haven’t changed this season when compared with his numbers last year. Yet when you look closer at the work he’s done, it’s clear that the 25-year-old has vastly improved. Let’s begin with the control and command of his pitches in the strike zone.

Here are a couple charts of every pitch he threw in 2018 on the left, with each pitch he’s thrown in 2019 on the right: 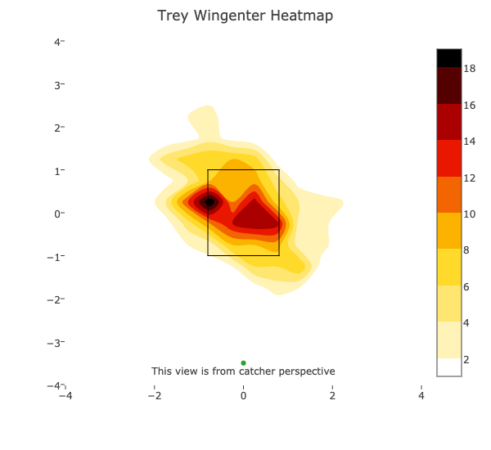 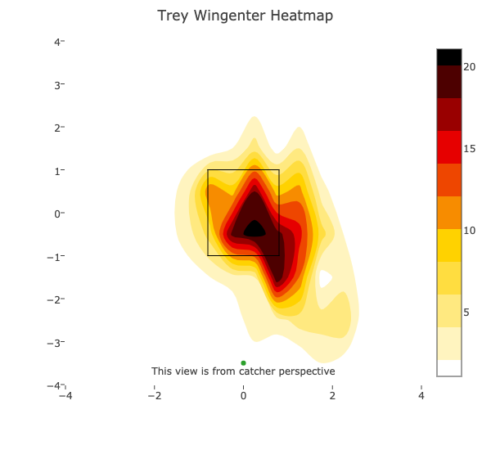 In 2018 he threw many pitches inside and over the heart of the plate up in the zone, while this season he’s done a much better job of locating them towards the outside corner to righties. This improvement in the command of his pitches has been the most important reason why he’s pitched well this season.

Furthermore, in the last month, he looks to have truly turned the corner in his pitching out of the Padres bullpen. Let’s take a look at his numbers over his last seven appearances:

While this is an admittedly very small sample, Wingenter’s performance in the aforementioned games is no fluke. It can also be reasonably argued that Wingenter may have already been hurt in his last appearance when he gave up a run to the Dodgers before going on the injured list. Nonetheless, it’s clear that he’s been lights out in his appearances during the last month.

Here are the locations of the pitches he’s thrown over the last month: 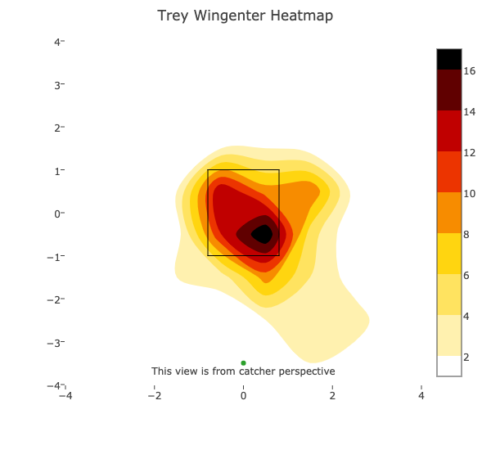 That’s pretty precise command of where the ball is going, for the most part. If Wingenter continues to command the ball this well, there’ll be no question of who is pitching the late innings along with Stammen and Yates this season. Another reason that the lanky right-hander has flourished lately, is that he’s actually lowered his spin rate since the start of the season. Here’s some data illustrating this change:

Although traditionally higher spin rates yield better results for pitchers, in the case of Wingenter having a lower spin rate has allowed him to generate more ground ball outs. The loss in velocity may also seem concerning, yet his improved command of the pitch has made it a non-issue for Wingenter. Here’s some more Statcast data that shows how this change has been beneficial for him:

Wingenter’s opponents hit the ball with less force, shorter distances, and at lower launch angles since 4/20. This is very encouraging for his future. Perhaps Wingenter was simply tired or injured, and that’s why he threw with less velocity and had a lower spin rate. It’s also possible that he took a little off his pitches in order to command them more effectively. Most likely is that he simply had a better command of his pitches or some combination of each of the factors mentioned. The bottom line is that he’s improved drastically in his most recent appearances.

While this is obviously a statistically inclined analysis of his performance, it’s also worth noting that Wingenter has quite the mound presence when he pitches. His competitive fire is quite similar to that of Chris Paddack and is another positive sign for him moving forward. He looks to have learned a significant amount already during his brief time in the majors, and his adjustments further illustrate his aptitude to become a better player. The Padres are surely very happy to see him return to the team from the injured list this week because their bullpen has been shaky of late. Considering how much Andy Green has already trusted Wingenter this season, the big right-hander will likely continue to pitch in high-leverage situations in 2019. Look out for him, because he’s looking like a very dangerous late-inning weapon to line up behind closer Kirby Yates. Now we just have to see if he can continue to be this good for the rest of the year.

All data in this article was taken from Fangraphs and Baseball Savant.

A sophomore at Willamette University in Oregon, Conrad is majoring in Spanish but is also a writing center assistant for other students at Willamette. He has been a Padres die-hard his whole life and hopes to bring comprehensible statistical analysis to the site.
Tags: Padres Bullpen, Padres Wingenter, San Diego Padres, Trey Wingenter, Trey Wingenter Padres

1 thought on “Trey Wingenter Is About to Breakout”