It was September 1978. I was turning 11 and starting 6th grade. As my grandmother and I came out of the grocery store one day, we passed by those little machines full of gum, candy, and various trinkets. Although I had always liked them, and never failed to miss an opportunity to beg a penny off her for a gumball, or a dime for a handful of Boston Baked Beans, this time my attention was caught by something more exciting; little replica NFL football helmets.

I grew up in a family that had no interest in sports at all. Neither of my parents had grown up following any teams in any sport, and consequently followed none themselves. As a result, no sports were watched at my house. I learned to play basketball, baseball, football, and tennis, but I was later learning them than most boys, so at first I did lag behind in the skill. I also came to caring about watching them slightly later than most. I wasn’t born into fandom of any team.

In 5th grade, I started to really enjoy throwing the football at recess. The other boys would catch it and run with it, pretending they were famous players that I had never heard of, because I didn’t ever watch the games on tv, like most of them had probably grown up doing.

Who was Tony Dorsett? Roger Staubach? Franco Harris? I decided to watch a pro football game, so come the next Sunday, I did. I was alone in watching, and I didn’t understand almost anything. It was confusing and I had nobody to ask what the hell all this stuff meant, so my initial exposure to it was underwhelming at best. But the seed was planted.

So, back to that day with the little helmets. I got one. If I remember right, it was Green Bay, but that may not be right, nor is it really important. I still didn’t even know what half of them were, so I was learning as I went. Every time we hit a store that had those little helmets, I was putting more quarters in, trying to get all 28 (at that time). I got doubles, triples, even quadruples of some teams, but eventually every team came out. Except one. I didn’t even know who it was I was missing. But then, that blue helmet with the gold lightning bolt on it dropped in its little cocoon to the opening below. 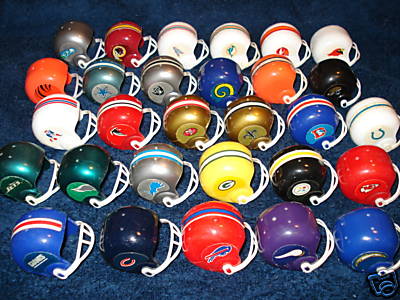 How had I missed this one before? I had never even seen this! I had to actually take it to school the next day to ask someone what this team was (remember, this was before the internet or anything resembling readily available information). The San Diego Chargers! Wow! This is the coolest helmet of them all!

Now, why didn’t I at least know what team this was? Well, I didn’t grow up in San Diego. I grew up in New Mexico, which has no pro teams of its own in any sport, and which is firmly in Cowboy and Bronco territory. Anything pro football there is totally about those two teams. If you grew up there, chances are that you are a fan of one of them. It was all we saw, all we heard or read about, and mostly, all they showed on tv on Sundays.

I continued trying to watch pro football, seeing pieces of games here and there, but mostly having to still take it in small doses, trying to learn. I even managed to come in near the end of a Chargers game one day, but saw very little. I followed the Chargers in the paper every Monday, seeing how they did, but it was so hard to see them on tv. Then, one day, I got it. I understood.

My father, who wasn’t one to socialize almost ever, went to see a friend of his. Don’t remember who, and doesn’t matter. But I was stuck sitting there on this guy’s couch for the next couple of hours while they did whatever they were doing somewhere else in the house. My only form of passing the time? This guy had a football game on, Chargers and Saints, December 9, 1979. I was 12, and I saw the light.

It was amazing. It was mesmerizing. It was magical. All the convoluted crap that one needs to know in football suddenly became crystal clear to me as I watched this awesome spectacle. I was in the moment. I came in just about at the start of the second quarter, but I felt like the whole thing was over in 10 minutes. I couldn’t see enough. I wanted more. I wanted to see this team do what it had done to the Saints that day, every week, which was to beat them 35-0.

From that day on, I was a Chargers fan. I caught every game they played on tv, which was the two definite Broncos games, the occasional Cowboys game, and, since they were actually really good at that point and a draw, two or three others at least. When they won, I felt good all week. If I had to walk to school barefoot on broken glass all the way, I still had the Chargers victory. When they lost, it ate at me all week. I would have a pit in my stomach every time I thought of it, barely able to wait for the next Sunday so they could fix it with a win.

When they weren’t on tv, which was far too often, I would watch whatever game was showing instead, just for the occasional score updates they would flash on the screen, and hoping that they might show an actual play. Those things didn’t happen much back then. I prayed that the game that was being shown would end really fast so maybe they’d go to the Chargers game and I could at least see the last few minutes.

I rode that great ride into the 80’s, watching Air Coryell do it’s thing, doing it the way it had never been done before, opening the game up and setting records along the way. It was full of great times, watching them rack up double digit wins and make the playoffs in 1979, ’80, ’81, and strike-shortened ’82. But it was to be full of bad times too (1983-1991, where they didn’t make the playoffs once). And Dan Fouts, who had been my football hero, and remains so to this day, retired in 1987. That happens? To him? What?

Been a resident of San Diego since 2000, and a rabid fan of the Chargers since childhood. Editor here at East Village Times. I believe that San Diego deserves the best in sports, and therefore, quality coverage of them.
Tags: 80's Chargers, Chargers, Dan Fouts, Dean Spanos, L.A. Chargers, Los Angeles Chargers, San Diego Chargers
Pages: 1 2