With the Super Bowl behind us, the sports world begins to focus on the coming return of baseball. Trucks have been loaded, pitchers and catchers report next week, and we are seven weeks away from MLB Opening Day. With that, we can start to look at the Padres’ 2018 schedule without our heads spinning about how far away it is. It’s going to come fast.

Let’s take a look at the five best road and home series on the 2018 slate.

What goes together better than baseball and the Fourth of July? How about a road trip up to the Bay Area to take in some sights while you are at it. The Padres haven’t played at the Oakland-Alameda County Coliseum since 2015. That might be a good thing, as it has aged about as well as Qualcomm, excuse me, SDCCU Stadium.

Still, I am sure the Fourth of July in the Bay Area would be fun. Plus, it’s interleague play and we get to see Andy Green decide who gets the “honor” of being the designated hitter. A player to watch is Stephen Piscotty. He has been one of the rare, fuzzy, feel-good stories this off-season. He was traded by the Cardinals to Oakland, where his mother was recently diagnosed with ALS.  This move allows him to be close to home. Classy move by St. Louis. Not to mention he’s a good ballplayer. He hit 22 home runs with a 113 OPS+ in 2016 before injuries got the best of him last season.

The Padres did not make the trip up to the Pacific Northwest last season for the first time since 2002. The “Vedder Cup,” as it is affectionately known for Pearl Jam’s singer Eddie Vedder, who grew up in San Diego, but became famous for his work in that Seattle-based band, is back on this season. The Mariners make the trip to Petco Park in late August, and the Padres return the favor here. 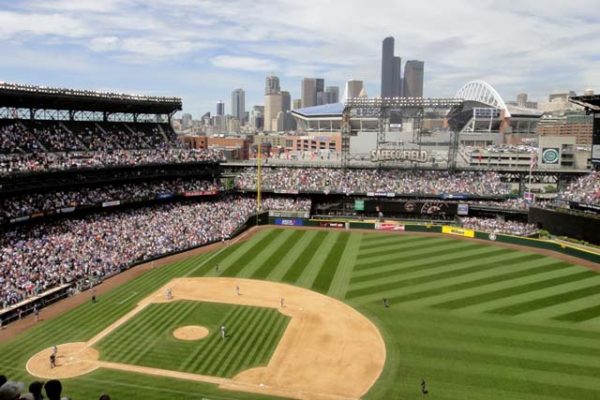 Safeco Field is a beautiful and unique ballpark. The Mariners also hope to be in contention, so this could be a fun environment. There is also this friendly rivalry with the Friars’ spring training co-tenants in Peoria. I may be biased because I currently reside here, but this would be a fun trip to another American League town.

A player to watch is Robinson Cano. He is a Hall of Fame player walking. He has one of the sweetest swings in baseball and is near the top of most offensive categories as a second baseman. Right before the season ended, he tied Rogers Hornsby for second all-time with 301 career homers at the position.

This will be the Padres’ first crack at the defending National League champs at Dodger Stadium. The hated rivals from the north have enjoyed a lot of success in recent years, much of it at the expense of the Padres. The Friars were 6-13 against the Dodgers last season, including 2-8 at Chavez Ravine.

The Dodgers will most certainly be the measuring stick for success in the National League West division again. That may be the case for the next several years with young stars like Cody Bellinger and Corey Seager. If the Padres have hopes of contending in the next 2-3 years, they will need to narrow the gap between them and the Dodgers. It is probably no accident that the last time the Padres had a winning season, in 2010, they were above .500 against the Dodgers (10-8).

Who wouldn’t love to take in a day game at Wrigley Field? In fact, in this series, you get three of them. Three of the four games of this series are currently scheduled as day games. San Diego had surprising success against the 2016 World Series champs last year, going 4-2, including sweeping them at Petco Park in late May.

The Cubs are coming off of their second consecutive National League Central title. Things don’t look much different for the former Loveable Losers. The Cubs are still among the class of Major League Baseball and it’s always interesting to see how the young Friars match up to the big dogs. Former USD Torero Kris Bryant is always a handful as he has 68 home runs in the last two seasons.

Speaking of big dogs, 2017’s biggest dog, the World Series champion Houston Astros, welcome the Padres to town in their first road series of the 2018 season. The Padres have not played at Minute Maid Park in Houston since the Astros moved to the American League in 2013.

The Astros could be just as good, maybe even better, in 2018 with the addition of Gerrit Cole to the rotation. When this series starts, the Astros will still be getting used to their fresh, new World Series rings. The cast of Jose Altuve, George Springer, and company are just getting started. This will be one of the toughest series of the entire season and it happens to be right out of the gate in April.

Native of Escondido, CA. Lived in San Diego area for 20 years. Padres fan since childhood (mid-90s). I have been writing since 2014. I currently live near Seattle, WA and am married to a Seattle sports girl. I wore #19 on my high school baseball team for Tony Gwynn. I am a stats and sports history nerd. I attended BYU on the Idaho campus. I also love Star Wars.
Tags: 1998 San Diego Padres, 2018 Padres Schedule, Andy Green, MLB, Padres, Padres 2018, San Diego Padres
Pages: 1 2