The next two years, Alomar hovered around the .290 mark, hitting a combined 13 HR, scoring a combined 162 runs, and stealing a combined 66 bases. All in all, he accumulated 10.7 WAR over three seasons with the Padres.

Sandy Alomar was blocked by Benito Santiago, who was succeeding in his role as the everyday catcher for the Padres. Sandy only appeared in eight games as a Padre, hitting one HR and driving in six.

Carlos Baerga was the last of the group to appear in the big leagues, but by no means did that mean he was devoid of talent. He performed very well in the Padres’ system. As a 17-year-old, Baerga hit .270/.321/.384 in A-ball with seven HR and 41 RBI. In Double-A he hit .273 with 12 home runs, something that was very impressive for a kid playing against competition that was mostly 4-5 years older than he was.

During his last year in Triple-A, he drove in 74 runs. In the months following, he was named co-MVP of the Puerto Rico winter league. Baerga figured to be a Padre in 1990.

Then, in the winter of 1989, the Padres suddenly pulled off a pretty major trade. The Padres acquired Joe Carter from the Cleveland Indians for Sandy Alomar Jr., Chris James, and Carlos Baerga. Carter, entering his seventh big league season, was a power hitter who would be a part of a dynamic Padres outfield along with Tony Gwynn.

The bright futures of Sandy Alomar Jr. and Carlos Baerga moved to Cleveland, while the Padres tried a push for contention with Carter. The trade hit Baerga hard:

“You feel mad; I still am,” he said. “When you sign with a team, you want to stay with that team your whole life. I was always happy there. I loved San Diego, and wanted to play there forever.

“They never gave me the chance.”

The trade did not exactly pay off for the Friars. Baerga hit 11 home runs and drove in 69 runs in his first major league season. All in all, he hit 103 home runs in five-plus seasons with the Indians, hitting over .300. He was also a three-time A.L. All-Star and two-time Silver Slugger winner, while splitting time between 2nd and 3rd base.

The Padres decided to roll with Benito Santiago at catcher long-term, hence the decision to trade Alomar. Sandy Alomar hit .290/.326/.418 with nine home runs and 66 runs batted in in his first season as an Indian, en route to winning both the Gold Glove and Rookie of the Year award. He totaled eleven seasons with Cleveland, going to the A.L. All-Star Game six times. 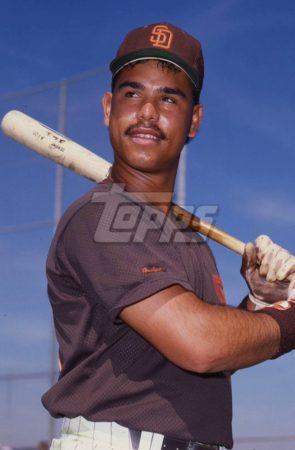 Following the 1990 season, the Padres decided to make yet another blockbuster move. The trade? Joe Carter and Roberto Alomar for Fred McGriff and Tony Fernandez.

Roberto Alomar left San Diego and went to eleven straight A.L. All-Star Games. His career totals included two World Series appearances, 10 Gold Gloves, an ALCS MVP, and an All-Star Game MVP. He was named to the Hall of Fame in 2011. He even called getting traded one of the “best things that ever happened in my career.” Yikes.

Joe Carter, mostly known among novice baseball fans for this walk off home run to win the World Series for the Blue Jays in 1993, hit 25+ HR in all but one season with Toronto.

Benito Santiago was the only talent left in 1992 from the five international signings. The breakup was kind of ugly. Following the 1992 season, he left via free agency.

The Padres did a good job in finding the talent.

But, as it seems to always be with the Padres, keeping and managing the talent was another story.