The Padres’ outfield defense is getting a bad rap that it doesn’t deserve.

Defensive numbers are far from perfect. There are no clear metrics like wRC+ or OPS for offense, to measure just how good a defender is at his position. There are so many factors at play, such as the players’ foot speed, jump on the ball from contact, shift position, and ballpark dimensions. This makes it a very difficult task to fairly judge a player defensively, especially as a team unit.

The Padres, for one reason or another, are routinely criticized for their outfield defense this season. Of course, there have been moments where that is 100% valid and a concern, but since most Padres fans only closely watch the Padres and no one else, their view of where the Padres stand as a team compared to other teams’ outfields is skewed.

Since those defensive stats are so raw, let’s run through several and find out if there is a common theme.

The most blatant and obvious defensive stat is errors committed. Like a false start in football highlighting an offensive lineman, an outfield error brings one play into the spotlight while that same outfielder has made dozens of solid defensive plays aside from that one error, but they go mostly unheralded until a mistake is made.

As a unit, the Padres outfield has committed seven total errors, which is a far cry from the worst in baseball, which belongs to the Seattle Mariners at 15 errors. There are nine teams in Major League Baseball that have committed more errors as an outfield than the Padres.

Wil Myers, who has been tasked with playing left field and center field this season, leads the Padres outfielders with three errors. Franmil Reyes has committed two, and Hunter Renfroe and Josh Naylor have committed one apiece.

Manuel Margot has gone error-less in over 300 innings in the outfield this season.

Right along with errors, fielding percentage is one of the more “old-fashioned” defensive stats, calculating the putouts, assists, and errors over how many chances total a player is given. The Padres have a .982 fielding percentage, which is 19th in the big leagues. Of course, that’s not going to win any Gold Gloves, but that is far from the worst in the league.

Now we get into more metric defensive numbers. The Padres outfield as a whole is currently at +4 Defensive Runs Saved, which is good enough for 11th in baseball. Hunter Renfroe boasts a +7 Defensive Runs Saved number, the best on the team by a large margin. Reyes brings the total number down as he is at -4 DRS, otherwise the Padres may be near the best in baseball. Myers comes in at a dead-even 0 DRS.

The Padres are much closer to the better outfields, or at least the perfectly average outfields, than they are the worst outfields in the league (the Rockies are dead last at -19 DRS).

Renfroe ranks seventh among all outfielders in the league in DRS, better than the likes of Mike Trout, Yasiel Puig, and Tony Kemp.

San Diego seems to have a better outfield than several playoff hopefuls in the league.

When looking at Statcast defensive numbers such as Catch Probability, the numbers once again favor the Padres having an average-to-slightly-above-average outfield defense. Baseball Savant ranks catches as 1-star, 2-star, 3-star, 4-star, or 5-star, based on the percent chance of a catch, with 1-star catches being routine plays that should be made 91-95% of the time. When looking at the most routine catches, in the 1-star category, the Padres make those catches 93.3% of the time, which is 10th-best in that category (keep in mind Statcast does not split outfield and infield stats).

OAA means “Outs Above Average.” The Padres have five, which also ranks highly as a team. 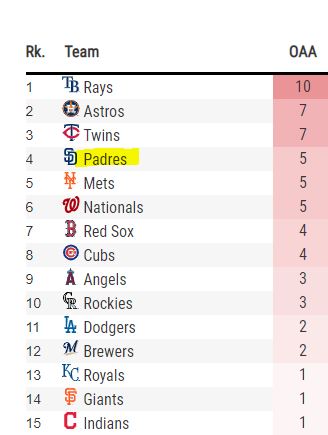 The numbers, however imperfect they may be, all indicate that the Padres outfield defense is at least average, if not respectable. Also, in this investigation, we found that Hunter Renfroe is turning into a solid defender on top of the wallop he brings with his bat.

Native of Escondido, CA. Lived in San Diego area for 20 years. Padres fan since childhood (mid-90s). I have been writing since 2014. I currently live near Seattle, WA and am married to a Seattle sports girl. I wore #19 on my high school baseball team for Tony Gwynn. I am a stats and sports history nerd. I attended BYU on the Idaho campus. I also love Star Wars.
Tags: Franmil Reyes, Hunter Renfroe, Manuel Margot, Padres, San Diego Padres, Statcast, Wil Myers

Padres Down on the Farm: May 18 (Mazara homers for EP/Missions throw another combined no-hitter/Dunn 3 hits for LE)

Padres shut down by Wheeler and Phillies, 3-0

Thanks Nick, that was enlightening, encouraging, and great research. I enjoy your articles! Now if only the “boy” could bring up their less then average OBP, and hitting with runners on base! Last nights 7 run inning was a good start! Go PADS!