When the Padres first called up Brett Kennedy on August seventh, it was an exciting day for fans who follow the team’s farm system closely.

After all, he had a 2.72 ERA in the Pacific Coast League and a 10-0 record — Kennedy was clearly deserving of getting the call to the show.

Unfortunately, in the first couple starts, Kennedy surrendered six earned runs on August 8th, and then five earned in his most recent start on August 14th. While the results didn’t really improve much from his first start, the process he used definitely was better in the second start in comparison with his first.

Let’s begin with the Statcast pitch locations of Kennedy’s first outing, followed by the same data from his most recent start on the 14th:

He clearly threw the ball all over the place in his debut, whereas in his second start he had much more specific location of his pitches. Just getting the ball out of the middle part of the plate was a positive for Kennedy considering how often he missed in that location during his first start.

Furthermore, the average exit velocity on batted balls against Kennedy decreased between the two starts he’s made. The batted balls against him were hit an average of 84.5 mph during his start in Milwaukee, and only were struck at 82.8 mph on average versus the Angels at home recently. Additionally, the average launch angle on those same batted balls decreased from 12.2 degrees against the Brewers to 8.5 degrees when facing Anaheim on August 14th. Hitters had a more difficult time elevating the ball to get extra-base hits in Kennedy’s second time on the bump for the Friars.

Kennedy improved in some part due to better mechanics in his second start, which was probably an issue in the first one simply because of nerves in his major league debut.

Regardless, look at these freeze frames of his release point on the fastball in both starts side-by-side:

His release point is higher on the left, during the second start he made — so he isn’t overthrowing as much and getting better plane on his fastball by throwing it with a higher arm slot. This shouldn’t be an issue moving forward, as he was most likely nervous and pressing a little in his debut, as we can see on the right. There’s data that supports these conclusions, too. Here are his release points, as plotted by Statcast: 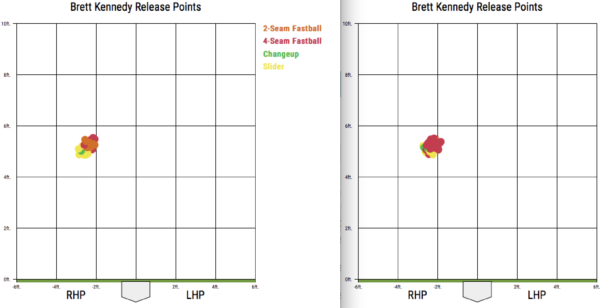 On the left is the data from his major league debut, while the same information on the right is from his recent start versus the Angels. As we can tell, Kennedy threw the ball with a higher release point in the second start, on average. More specifically, he upped the release point on his slider (In yellow on the chart) and changeup (In green on the chart).

This is something important to discuss because five of the eleven hits Kennedy allowed in his first start were off his slider — two of which were struck at a greater exit velocity than 100 mph. Clearly his opponents were seeing the slider well out of his hand, especially considering there was no major league data on him coming into the game. During his start against the Angels, Kennedy only allowed one hit on the slider, which was only hit 71.2 mph off the bat.

A positive to point out, despite his struggles, is that Kennedy has only walked one hitter across his first nine big league innings. He has only struck out five hitters, so his stuff doesn’t look like it’ll ever blow anyone away. He did strike out a decent number of Triple-A opponents, with an 8.06 K/9 mark. As he gets more comfortable at the level, Kennedy should continue to improve.

When a team sees their eleventh-round draft pick be as successful as Brett Kennedy has been, it’s already a great accomplishment for the team’s scouting department. Even if this is the only time he sees in the big leagues, the fact that he’s even gotten this far is remarkable. The reality is that he’s really improved though, so look for him to have a strong start the next time he takes the mound. This is a guy who has exceeded expectations throughout his whole career, so let’s not underestimate what he can do in the major leagues.

The results haven’t been there yet, but the process is looking strong enough to get behind some better results in the starts to come for Brett Kennedy.

A sophomore at Willamette University in Oregon, Conrad is majoring in Spanish but is also a writing center assistant for other students at Willamette. He has been a Padres die-hard his whole life and hopes to bring comprehensible statistical analysis to the site.
Tags: Brett Kennedy, Brett Kennedy Padres, Padres 2018, Padres Kennedy, San Diego Padres