The Padres made splashes in the offseason and early in the regular season, resulting in more fans at Petco Park.

Attendance numbers are always a good barometer for how to measure a city and fan base’s interest in the team. If a team is winning, or at least trying (or spending) to win, the fans will show up. This was the case in 2019 for the San Diego Padres. Though their attendance numbers fell just short of the 2015 total of 2,459,752, when ranked against the other ballparks in baseball, the Padres finished 14th in the majors.

That ranking is their highest since 2007 when they finished 13th. That was a year in which they won 89 games, the fifth-highest total in team history, and were just coming off of back-to-back National League West division crowns.

This time around, the Padres went 70-92 and for the better part of the second half, played very uninspired baseball along with some disheartening injuries and trades. Despite all that, the attendance numbers have been as solid as they have been in over a decade.

Before you point and scoff at the fact that lots of visiting fans (especially the Dodgers and Giants) filled the seats, keep in mind that has always been a thing in San Diego. San Diego is America’s Finest City, after all, a destination for a vacation. Also, it is a military town with lots of transplants. There are bound to be visiting fans in the seats, but that had not changed over the years, even when the Padres were good. 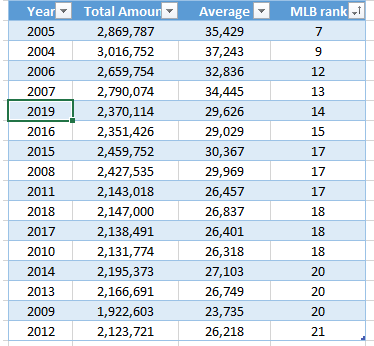 The total itself is the best since 2015, but baseball as a whole experienced a drop in attendance this year, while the Padres maintained and improved numbers, thus the better ranking. This is what happens when the team opens the checkbook to sign a superstar in Manny Machado and is unafraid to give top prospects like Fernando Tatis Jr. and Chris Paddack the spotlight, even if it means losing a year of service time down the road.

The fans responded in kind, by opening their wallets to attend games at beautiful Petco Park. The adage from the classic baseball movie, Field of Dreams, is “if you build it, he will come.” However, in the case of baseball ownership, “if you spend it, they will come.” The Padres brass showed they are willing to take steps to build a winner this year and the fans responded by showing up to the ballpark.

Despite the disheartening record, it’s hard to deny that there is a different feeling in the Padres’ organization and the city of San Diego. The level of optimism is near an all-time high, and the attendance shows that.

In fact, the Padres had better attendance in 2019 than four playoff teams (Minnesota, Washington, Oakland, and Tampa Bay).

Native of Escondido, CA. Lived in San Diego area for 20 years. Padres fan since childhood (mid-90s). I have been writing since 2014. I currently live near Seattle, WA and am married to a Seattle sports girl. I wore #19 on my high school baseball team for Tony Gwynn. I am a stats and sports history nerd. I attended BYU on the Idaho campus. I also love Star Wars.
Tags: Manny Machado, Padres, Padres Attendance, Petco Park, San Diego Padres