In the midst of yet another rebuilding year, it was not a successful season at the major league level for the Padres’ organization. When looking at the team’s win-loss record, it’s hard to be positive about the team at the moment. However, there were bright spots to be noted regarding the season, that need to be recognized as well.

While the minor league teams within the Padres’ organization were full of impact talent and top prospects, the major league roster in San Diego did not turn in a particularly impressive performance in 2018.

After being signed to an eight-year, $144 million contract, Eric Hosmer was worth -0.1 fWAR during the season.

Further exacerbating the offensive struggles, was a campaign in which Wil Myers only played in 83 games due to various injuries.

Therefore, the lineup struggled significantly throughout the entire year. In the rotation, the team found little consistency from its veteran starters. While Clayton Richard and Tyson Ross started the year with a string of solid starts, as the summer wore on they faltered. Ross was claimed on waivers by the Cardinals, and the Padres let him go rather than pulling him back. Richard didn’t fare much better, as he was recently released by the team after they officially announced the signing of Ian Kinsler.

The bullpen was fantastic, and we can say that confidently without feeling like we’re overstating things. Even after the departure of the team’s closer in Brad Hand, the Padres’ bullpen was downright dominant. More on that later, as we should still focus on the team as a whole in this analysis. Here’s a chart that outlines the Fangraphs WAR produced by the most valuable members of the Padres’ roster during the 2018 season: 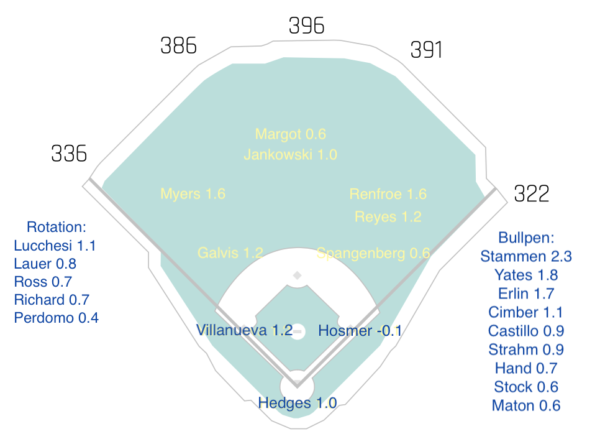 So to start, let’s discuss the position players and how they fared throughout the year. Despite the fact that he only played for just over half the season, Myers managed to be one of the two most valuable position players on the Padres in 2018. Even after Hunter Renfroe lost playing time to Franmil Reyes in right field, he produced 1.6 fWAR to equal the production of Myers. The best position players on the Padres last year didn’t even play full seasons, which speaks to how poorly the rest of the players performed.

Elsewhere, the situation didn’t get any better, as guys like Freddy Galvis, Austin Hedges, Manuel Margot, and Travis Jankowski played great defense, yet failed to hit well enough to be very impactful on offense. In the case of Galvis, it’s clear he’s a veteran who has played in the major leagues for long enough, that we should have never expected him to be very productive in the batter’s box. The same can largely be said of Jankowski, who has always relied on speed and defense in providing value more than anything else. There remains hope that Margot can be a better hitter, and Hedges has also shown some promise with the bat. Here’s some data regarding the differences between the aforementioned players defensive, and offensive value they brought to the Padres last season:

For reference’s sake, we should remember that wRC+ is a statistic that represents the total contributions of a player to his team’s offense.

This past season, the average player produced a wRC+ of 97 — So Galvis, for example, was 12% worse as a hitter than league average. It also turns out that his defense was negatively valued by the ultimate zone rating statistic, which measures the number of plays he made, relative to the number of defensive chances he had at Shortstop. Hedges was rated very highly by the metric Fielding Runs Above Average, which was used in the table because UZR is not calculated for the defensive value of Catchers. Clearly, the players above were much better with the glove in 2018, than with the bat in their hands.

Collectively, the Padres’ position players were less than stellar at the plate, although a large number of them were good defenders.

For example, the emergence of Franmil Reyes late in the season, left the Padres with more viable outfielders than they could play at once. That’s a good problem to have, and one they didn’t run into with their infielders. Christian Villanueva hit many homers to start April, but never replicated that success and played poorly enough for the Padres to try Wil Myers at his position. It didn’t help that he only hit for a .189 average against right-handed pitchers, which was another reason for his lost playing time towards the end of the season.

Then there’s the elephant in the room, by the name of Eric Hosmer. In a nutshell, he had amazing batted ball luck on ground balls in 2017 with the Royals, was seen as a great player by the Padres, and was signed in February to an eight-year deal. He promptly began hitting more ground balls, and after having worse luck on batted balls in 2018, saw his hitting value go down the drain. As the highest paid player on the roster, Hosmer truly was the poster boy for a team with position players for whom we had high expectations for, that largely let us all down in 2018.

On the mound, the days were sunnier in San Diego throughout the season. Joey Lucchesi was a solid pitcher for the team almost every time he took the mound, the left-hander kept the team in the game to the tune of a 10.04 K/9 ratio. Elsewhere, Eric Lauer was another rookie who made a strong debut, posting good numbers for his first go-round in the big leagues. Veterans such as Clayton Richard, Luis Perdomo, and Tyson Ross also provided decent innings for the team. Given that Richard and Ross are no longer on the roster, and the fact that Perdomo stands little chance of being a part of the rotation next year — We can currently slot Joey Lucchesi into the number one place in the Padres’ 2019 rotation. Let’s look a little more closely into his performance over the course of the 2018 season: 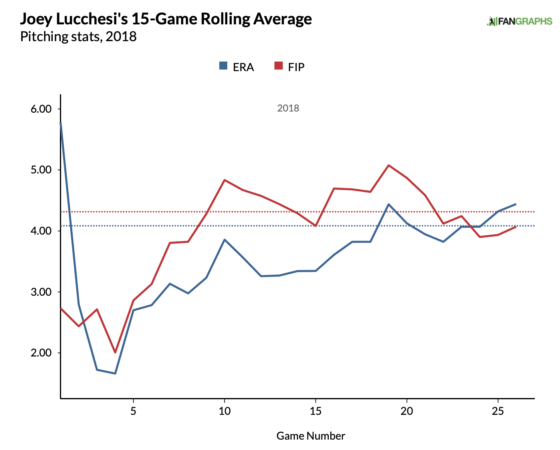 Although he was a solid pitcher, Lucchesi didn’t pitch as well towards the end of the year, as the Padres would have liked. There were plenty of positives to take away from his year in 2018, but his struggles must be noted by the team as they move forward and prepare for next year.

Now we can discuss the most impressive part of the Padres’ 2018 season: The Bullpen! In case you didn’t notice, the Padres’ bullpen had three pitchers produce more fWAR in value than the best of the pitchers in the team’s rotation. Now that largely speaks to the team’s need to improve the rotation but is also an example of how strong the relievers for San Diego were. Here are some more specific statistics that put the Padres’ 2018 team bullpen performance in perspective:

Let’s talk about Craig Stammen and his importance to the bullpen because we haven’t heard much about him, considering that he was the most valuable reliever according to Fangraphs WAR. That mark of 2.3 also ranked fifth among all major league relievers, just behind the well-known Edwin Diaz, Blake Treinen, and Josh Hader.

Robbie Erlin was a highly useful reliever as well, and he walked hardly anyone — His walk rate of 2.7% was the second-lowest of among all qualified major league relievers. Kirby Yates proved to be a viable closer after the departure of Brad Hand, also striking out 12.86 hitters per nine innings. That was good for twelfth-best among qualified major league relief pitchers.

Discussing those three relievers also doesn’t even begin to recognize the number of players who proved to be highly valuable assets out of Andy Green‘s bullpen. Let’s not forget the contributions of the other relievers that also posted positive fWAR figures, as shown in the first chart. If the Padres are to become a contender in the next couple of years, they will be in good hands during the late innings, knowing they have a strong bullpen to hold and protect leads.

It was a hard season in terms of the number of losses that seemed to just pile up for the Padres in 2018, but that’s a disappointing surface-level evaluation of the season. The development of many young arms, in particular, proved to be largely positive. There were debuts of players such as Francisco Mejía and Luis Urías, who figure to be important parts of the next winning Padres team.

The numbers above largely point to a future that is bright in San Diego, because many of the veterans who have underperformed will be gone eventually. As the talent in the minor leagues trickles up to the major league team, we will see a markedly more competitive team in San Diego.

A sophomore at Willamette University in Oregon, Conrad is majoring in Spanish but is also a writing center assistant for other students at Willamette. He has been a Padres die-hard his whole life and hopes to bring comprehensible statistical analysis to the site.
Tags: Eric Hosmer, Freddy Galvis, MLB Padres, Padres, Padres 2018, San Diego Padres