Let us pretend Colin Rea and Luis Castillo were not even in the Padres-Marlins deal headlined by Andrew Cashner, because, when all was said and done, they weren’t. Even with those two players eliminated from the trade, the Padres still received a very nice haul for Andrew Cashner. The centerpiece of the trade was 2015 first-round pick Josh Naylor, whose ceiling is probably a 25+ HR first baseman. The 19-year-old was rated the top 2016 Marlins prospect by Baseball America during their annual midseason update.

Jarred Cosart was a piece that caught some people’s attention as well, simply because of his former status as a top prospect. Cosart, another reclamation project for Darren Balsley, has battled injuries throughout his short big league career and struggles badly with control issues. However, if Balsley can somehow work his magic again, Cosart still has good stuff that can play in the back of a rotation (best case scenario) or in a long-relief role (if everything works out well) or the Padres staff for the foreseeable future.

The third and final player the Padres got from the Marlins in the trade was Carter Capps.

The reliever is recovering from Tommy John surgery with a return next season.

Now, if you look at his career before the 2015 season, it would be assumed he was just a throw-in to the deal; an average reliever with a high strikeout rate who would eat innings but not make much of an impact.

Capps was drafted in the third round of the 2011 draft by the Seattle Mariners and zoomed through their system, as relievers sometimes do. His MLB debut came about 13 months from the date in which he was drafted. Capps’ 2012 season was solid, but not dazzling: 25 IP, 28 K, and a 3.96 ERA.

The Mariners then traded him in December of 2013 to the Marlins for Logan Morrison.

But nobody could have anticipated what would come for Capps in 2015.

In 2015, Capps was remarkable. Before he was sidelined by a “sore elbow” late in the season which eventually led to Tommy John surgery, Carter Capps was out-of-this-world like.

Those stats sound impressive? There is more.

At one point during the season, per FanGraphs, batters swung 59 times at his curveball and whiffed 47 times.

The funky delivery (shown above) was a big reason for his success. Per FanGraphs, Capps threw the fastest “perceived velocity” pitch in the big leagues last year, at 105.5 MPH. Yep, faster than Chapman. Capps’ delivery allows him to deliver the ball closer to the plate than any other pitcher in the big leagues. This allows his velocity to seem much faster than anyone else:

I mean, look at how far Capps delivers the ball from the mound: 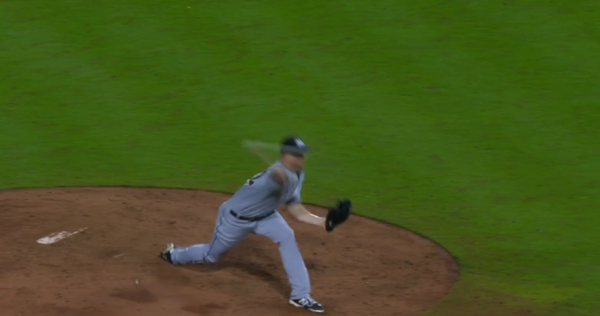 This delivery has not come without controversy. Many people believe this pitching motion should be banned. He has had to deal with the controversy during a game before. However, MLB has clearly stated that just as long as he drags his foot off the rubber instead of jumping forward off of it, he will be fine. It really is hard to foresee the future and tell if MLB will do anything about this later on, but it seems that this case will not be reopened anytime soon. 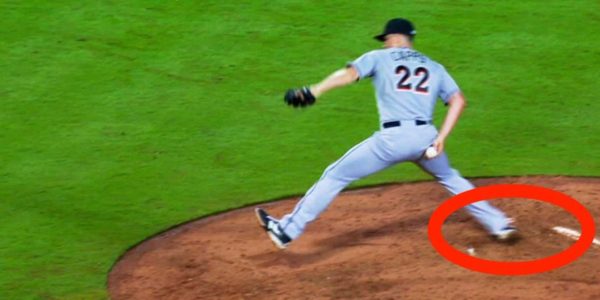 It will definitely be interesting to see if Capps’ 2015 was an anomaly or not. 31 innings of absolute dominance is a small sample size, yes, but those 31 innings were unlike anyone has really ever seen before.

With news that Capps is eyeing Spring Training 2017 as his return date, we really are not all that far off from seeing him in action. He has already started a throwing program, too, which is very positive considering he is only five months or so removed from TJ: “The goal is to be back by spring,” Capps said. “That shouldn’t be an issue. That should put me right at 12 months, so I’m looking forward to that and hopefully have no issues, no setbacks.”

If Capps comes back from TJ and rekindles the kind of season he had in 2015, the Padres have themselves one of the best relievers in the game. Capps is definitely a flip candidate to be dealt at the deadline or after the 2017 season, which is definitely intriguing considering how teams value top relievers in today’s game.

If Capps cannot come back completely and is even just a shell of his 2015 self, that is okay, too. He can still be a valuable piece in a Padres bullpen that will not have a lot of experienced arms in 2017. Capps will only be turning 27 in August of next year. He will hardly be a “seasoned veteran,” but rather a pitcher entering his prime years. That is definitely enticing.

Acquiring Capps, when all is said and done, could turn out to be one of A.J. Preller’s best moves coming from the 2016 deadline. Health permitting, only time will tell.

The Padres NEED to show confidence in Trent Grisham