The philosophies of the old school coaches align so well since each worked under the other at different points with the Aztecs. Hoke brought Long in to serve as defensive coordinator, and Long hired Hoke as a defensive line coach. Heading into year three of Hoke’s latest run as the head man at State, however, differences between Hoke and Long have emerged.

Many of the things that separate the two friends center on recruiting. Hoke is one of the best in the nation at telling the story of the university and building repartee with players and coaches. Not only did he revamp the Player of Personnel Department, but he also changed one emphasis for the program. SDSU now encourages those who can enroll early.

Long discouraged players from forgoing their senior high school season to participate in Spring Camp before their freshman year of college.  He reasoned that some of life’s best memories are made that final semester of high school, and his players would be better served making those than starting their collegiate careers. At the press conference on the first day of the early signing period, Hoke had a different view.

“I think there’s no doubt that any guy who comes in mid-year they learn so much about number one college, what it’s like to be a college athlete, socially, all that kind of stuff. I think that really helps. Obviously, getting to know teammates, getting to know the strength coach – even though I don’t know if I’d want to know Adam Hall, personally if I was an 18 year old. That whole transition is huge.” 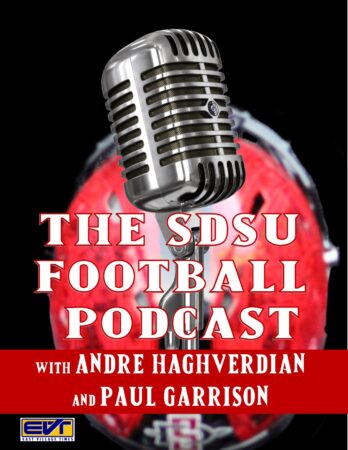 With that quote, SDSU enters a new era of early enrollees. What does it mean for a recruit to enter the program at what would have been his final semester of high school? Even as the stars of the 2021 season have barely left the Mesa to pursue their NFL dreams, three of the 14 players signed to the 2022 recruiting class are moving to campus to take their place. QB Kyle Crum, QB Liumotumotua’anaileafi Aumavae, and TE Logan Tanner appeared as guests on the first episode of The SDSU Football Podcast. The trio covered many topics among them, detailing their plans and expectations as they move to San Diego State on January 17.

Each of the three 2022 early-enrollees took a different path to graduate from high school early, but all three emphasized the importance of starting school. It makes a lot of sense. If a university is willing to pay for a player’s education, the more semesters they are on campus, the more scholarship money they earn. Football players are enrolled three to five years, so if they arrive a semester early, they will have a better chance of earning their bachelor’s degree by the end of that third year and their master’s degree by the fifth year.

Freshmen arriving early on campus increase their chance of earning playing time in the upcoming season. In 2021, Will Haskell arrived on campus about two months before the season. During the first practice open to the media, only a month away from the season, it was evident how heavy each rep was for the true freshman. He split time evenly, but every mistake was magnified because there was no adjustment period. During one session, each QB was given a few snaps before rotating to the next signal-caller. On the first of Haskell’s plays, he turned the wrong direction on a handoff. The rest of his snaps were given to Lucas Johnson. Haskell grew more comfortable as the season progressed. How might his impact have been different in 2021 if he had arrived early like Crum, Aumavae, and Tanner are?

“I wanted to get a head start on especially learning the plays as a quarterback,” Crum said. “Getting as much of that under my belt as I can early. Honestly, I just felt it would be beneficial all-around to be with the team, especially as a quarterback, you want to be the leader. Making those bonds and those connections. Also, getting my body bigger and stronger. Even working out at home is not the same as the college weight room, so I felt the earlier I could move in and get started, the better chance I have of starting on the field in this next season.”

As Crum mentioned, enrolling early allows a player to begin the process of getting to know the other players on the team. On any club, the veteran players already have chemistry. This Aztec group, having played through COVID and two seasons up in Carson is particularly close. While they will be inviting, especially if a freshman can help them win, there will be a transition period. The sooner one can get started on forming these bonds, the tighter they will be when the season gets going.

“I felt there’s a lot to gain by getting in early,” Aumavae said. “First off, I can get in winter workouts. Just start bonding with my new teammates. Then, having the opportunity to come in and compete in spring ball, that was huge for me. And then, honestly, education-wise, I want to graduate within three years because I want to use as much of my scholarship to make sure I am getting my education as well.”

San Diego State is moving into Snapdragon Stadium. The fancy new home and increased revenue should pay off with access into the homes of higher regarded recruits. At that level, enrolling early is more common because the players are closer to being ready to play. This decision by the coaching staff to encourage future Aztecs, like Tanner, Aumavae, and Crum, to enroll early should help when and if they land more coveted high school players.

My earliest sport's memory involve tailgating at the Murph, running down the circular exit ramps, and seeing the Padres, Chargers and Aztecs play. As a second generation Aztec, I am passionate about all things SDSU. Other interests include raising my four children, being a great husband and teaching high school.
Tags: SDSU, SDSU Aztecs, SDSU Football

3 keys to an SDSU Aztecs victory over Colorado State