The Aztecs got a crucial sweep over Boise State to take first place in the conference.

A win at UNLV will result in their second regular-season championship in as many years. It was a hard-fought series and wasn’t always pretty. Here are the takeaways.

1. Consistency is still an issue.

The Aztecs opened up game 1 against the Broncos with a 13-2 run. They slowed down but still finished the half leading by 12. Gomez came out hot to start the second half, and the lead grew to a 17 point lead. Then, about halfway through the second half, Boise had a 17-2 run of their own. They pressed on defense, forced turnovers, and started hitting shots. They erased the 17 point lead and forced overtime. The Aztecs had multiple chances to take the lead to end the game and instead turned the ball over.

It was a very tense second half. Once overtime started, the Aztecs seemed to lock in again, and they finished the game on a 15-3 run. They won the game, but the level of play needs to stay more consistent.

Basketball is a game of runs, and it was inevitable that Boise would go on an 8-0 or 10-2 run at some point. That shouldn’t be as much of a concern when you have a 17 point lead. We’ve already seen this Aztec team give up a 26 point lead, though.

This is the same team that did something very few teams had done when they won five games in a row by 25 points or more. That is an accomplishment only 4 or 5 teams have done in the last two decades. They’re also the only team in conference history to give up a 26 point lead in a conference game and almost just gave up a 17 point lead in game 1 of the series. Holding leads, finishing games, and playing full 40-minute games will be required if this team is going to reach its full potential.

The second game had some more consistency. The team played solid when Schakel was in the game and less so when he wasn’t. It wasn’t a high level of consistency, though. It was just enough to win the game. Playing at a high level consistently is the goal to make a run in the big dance.

2. Is Trey Pulliam finding his rhythm?

During the 2020 season, Pulliam had one really good game (at UNLV) and some other solid games. This season Pulliam has been a great defender all season. He’s well above average in Defensive PIPM and leads the team in Defensive POE. Recently, he’s started to catch fire on the offensive end. He set a career-high for scoring against Fresno St and matched it in game 1 against Boise St. Over the first 19 games, Pulliam shot 36.8% from the floor and 20% from behind the arc. Those numbers have improved significantly over the last two series, however.

Over the last four games, Pulliam has shot 44.4% from the field and 50% from behind the arc.

We’ve seen that as good as Schakel is, he can be taken out of games by teams with Athletes that stay glued to him. When that happens, someone else needs to step up and help Matt Mitchell in the scoring department. Could Pulliam be filling that role? Over the past two series, he’s played great in the first game and regressed in the second. Similar to the first point, if he can play consistently, it gives the team another threat and makes it harder to key in on Schakel.

We saw exactly that over the Boise series. In game 1, the Broncos were able to key in on Schakel and limit him to 6 points, and Pulliam tied his career-high in scoring. In game two, Boise started hedging Pulliam on the pick and rolls, and that opened up other parts of the floor and helped let Schakel loose.

Before playing SDSU, Boise State had been averaging 77.8 points per game. They had just come off of a series against Defensive powerhouse Utah St. (the same Utah St that held the Aztecs to point totals of 45 and 59) and had scored 79 and 81 points in two victories. They are an outstanding offensive team (better than 82% of college offenses, according to synergy.)

SDSU held them to 66 and 58 points. The Aztecs’ offense wasn’t always pretty, but the defense was locked in. The defense was ranked 17th best in the nation, according to KenPom heading into the series. After sweeping the Boise series and holding them well below their average, SDSU’s defense now ranks 8th in the nation.

The Aztecs are currently in first place in the conference due to their defense. It’s locked in, and as long as it stays that way, this team can play with just about anyone.

The Aztecs pretty much guaranteed an at-large bid in the big dance this series. Even if they were to lose to UNLV and their first opponent in the conference tournament, they’d still have a good shot. They’re currently 18th in the NET and are floating around the top 20 of all the other major metrics.

As of 2/28, the Aztecs are a projected 8 seed in the tournament. Despite the metrics loving them, the lack of quad 1 wins really holds them back. If they manage to win another three or four games (winning the tournament title), it’s not hard to see them moving up to a 7 or even a 6 seed. Boise St, Colorado St, and Utah St are all top 50 NET teams as of 2/28, meaning beating any of them on a neutral floor in the conference tournament would count as a quad 1 win and remove that last flaw in the resume. The Aztecs would have to beat at least one and likely two of those three teams to win the tournament title. Improving from the No. 8 seed is important to avoid a potential 1 vs. 8/9 matchup in the round of 32. 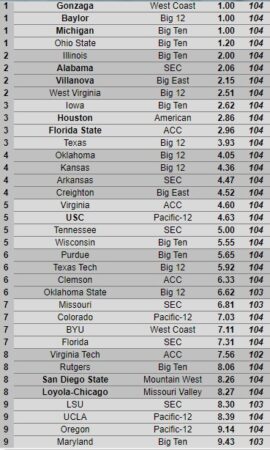