After missing just over a month of the season with a hamstring injury, young center fielder, Manuel Margot, made his long-anticipated return to the San Diego Padres’ lineup on Tuesday night against the Atlanta Braves. In order to make room for Margot on the roster, the Padres made a temporary move, shifting Chase d’Arnaud to the paternity list, as the infielder just had a baby boy on Tuesday morning. However, given a move to the paternity list is only at most three games, this still leaves the Padres with a decision to make regarding the roster.

The big question is: Will Franchy Cordero be the one sent down with Margot back or should he remain in the big leagues?

Given the situation, this is obviously a tough question to answer. With Margot back in the fold, Cordero would obviously be relegated to a left field spot at best, although with how Jose Pirela has been playing, it is hard to place him on the bench.

To replace Margot on the roster immediately following his injury, Cordero was called up to make his major league debut. Originally, it was supposed to be a temporary call up, as it was expected that Margot would not miss significant playing time. However, a 10-day DL stint turned into a month of playing time, and Cordero has had 93 plate appearances, playing almost every day at the big league level over the last month.

Despite riding high for those first few weeks, Cordero has come crashing down to earth in recent weeks, as he has slashed just .167/.200/.375 over the last 16 days with a 46 wRC+ and a strikeout rate of 47.1 percent. Even more alarming, Cordero has not gotten a hit in his last 26 plate appearances, slashing .000/.000/.000 during that time. Yup, Cordero has not reached base at all since a single on June 17. During this most recent streak, Cordero has struck out in nearly 70 (!) percent of his plate appearances while hitting ground balls over 80 percent of the time. Over this last week-plus stretch, Cordero has been simply overmatched by big league pitching.

So Cordero had his highs and now he has reached the low point, but where does this leave the young outfielder? Can he turn this around at the big league level? Or should he be sent back down to Triple-A to work out some of the kinks in his game?

Originally, I was inclined to think that Cordero should stay at the big league level and try to figure things out. However, there is no guarantee he would get everyday playing time, especially given how Jose Pirela has been the Padres’ best hitter in the month of June. With his plate discipline eroding by the minute, as evidenced by his 38.4 percent swing percentage on pitches outside the strike zone and 21.2 percent swinging strike rate, it is clear Cordero needs to improve plate discipline in order to be a successful big league hitter.

Sure, he has proven he is capable of hitting big league pitching, but he needs to cut his strikeout rate drastically in order to be successful. There is no player that succeeds in baseball with that kind of strikeout rate. Joey Gallo has the highest strikeout rate of any qualified player at 38.2 percent, but even that doesn’t come close to Cordero’s 44.1 percent strikeout rate.

At this point, the best thing for Franchy Cordero is to head back down to Triple-A El Paso, get every day playing time, and figure out a way to improve his plate discipline. Cordero is sporting whiff rates above 20 or 30 percent for nearly every pitch type, which demonstrates that he has just been overmatched in recent weeks. As his zone rate has slowly declined the longer he has been in the big leagues, his swinging strike rate has steadily increased. Pitchers adjusted by giving Cordero fewer pitches in the zone, and he obliged by chasing more pitches out of the zone. 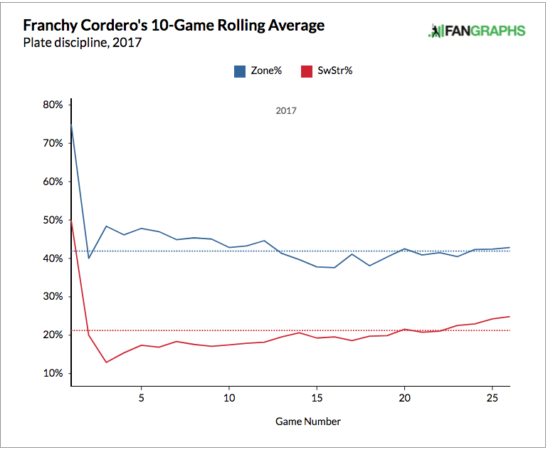 There doesn’t really appear to be an answer here. Franchy Cordero could be a solid major league ball player someday. The only obvious fact here is … that day is not today.

Editorial and Prospect Writer for East Village Times. Twenty-five years young, Patrick has lived in San Diego for his entire life and has been a Padres fan nearly as long. Patrick lives for baseball and is always looking to learn new things about the game he loves through advanced stats.
Tags: Franchy Cordero, Padres, Padres Franchy Cordeo, San Diego Padres