San Diego State will be playing the Syracuse Orange in the NCAA tournament. The game will air on CBS with a tip-off time of 6:40 on Friday, March 19th.

Despite being an 11 seed, Syracuse is a really good team. There are no easy matchups in March, so what do the Aztecs need to do to survive and advance? What do the matchups look like? What will the strategies be? Let’s take a closer look.

Syracuse currently ranks 41st in KenPom, whereas the Aztecs rank 20th. Syracuse has a 1-7 record against Quad 1 teams, and the highest-ranked team in the Net that they’ve beaten is North Carolina (32) at home by two points. That being said, they lost to Virginia (12) on a buzzer-beater in their last game, so they can’t be overlooked.

Syracuse is a very shallow team. They only play seven players more than ten minutes a game. They also keep players in the game with two fouls more than almost anyone in the nation. Compare that to the Aztecs, who play ten players more than 10 minutes a game. The Aztecs have come at opponents in waves this season, and have shown an ability to wear opponents out over the course of 40 minutes. That could be the case once again if Syracuse continues to play only seven players, their shots may start missing short towards the end of the game. Similarly, if the Aztecs can get one of Syracuse’s stars in foul trouble, they won’t have any quality replacement players.

Syracuse is also one of the taller teams in the nation. They have the 31st average height according to KenPom, and start four players who are 6’5″ or taller. For comparison, the Aztecs have played three teams with a greater average height. Boise St. is 20th, Nevada is 25th, and Utah St. is 27th. The Aztecs went a combined 6-2 against those teams. So despite Syracuse having a lot of length, especially on the wings, it shouldn’t be a concern for Aztec fans.

How will SDSU run the offense?

Syracuse is famous for running a 2-3 zone for 40 minutes a game. Most teams will run a zone as a way to break the rhythm of the opponent and make them think for a few possessions. Not Syracuse. Syracuse runs their 2-3 zone every play regardless of what happens. Historically they are really good with it, usually having an elite-level defense. That defense has fallen off a bit this season, down to 89th in the nation, according to KenPom.

The best thing to do against any defense is getting the ball down the floor before the defense can get set up. The Aztecs have been a below-average team in transition, but it is still more effective than the half-court offense, and the more you can avoid the zone, the better. Syracuse is also very bad at transition defense (18th percentile), so the Aztecs should definitely look to push the ball when they can.

If transition scoring isn’t doable, the way to beat a zone is by hitting three-point shots. 2-3 zones have many players on the perimeter, but they’re so focused on denying penetration that they often leave shooters open. This isn’t necessarily the case with Syracuse. Since they run the 2-3 zone exclusively, they know how teams will try and beat them and have counters for those counters. They have a well-above-average three-point defense this season. Where they are vulnerable is actually inside. The Orange are good at denying penetration, either off the dribble or the pass, but once the ball gets inside, they have struggled to stop it.

Here is their defensive shot chart for this season (Blue zones are where they’re bad at defending): 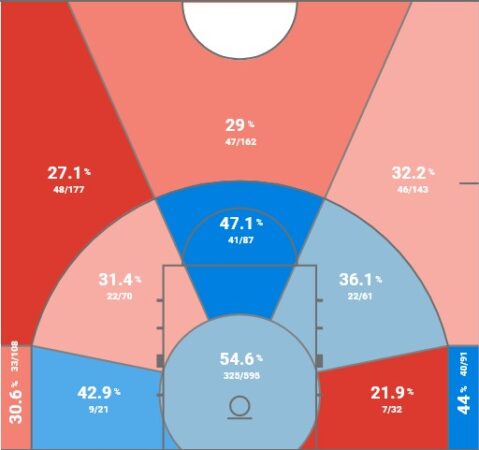 The Aztecs will want to shoot from the blue areas as much as possible.

The Aztecs have a solid system for doing this. They’ve been running the same zone principles for years and so should be familiar with what to do. I detailed how they attack zones in a video a few years ago, and not much has changed. The zone stuff starts at 4:13.

The one difference will be that rather than alternating bigs as the ball switches sides, it will just be Matt Mitchell moving across the free-throw line. Once Mitchell has the ball at the free-throw line, the Syracuse center will step up to contest any shot attempt, and the wings will drop down to guard Nathan Mensah and prevent Mitchell from driving. As that is happening, Mitchell will need to decide whether he has time to get Mensah the ball before the wings drop down, if a shooter is open on the wing or in the corner, or if he should take the free-throw line jumper.

Here is Mitchell’s shot chart (red zones are where he shoots efficiently): 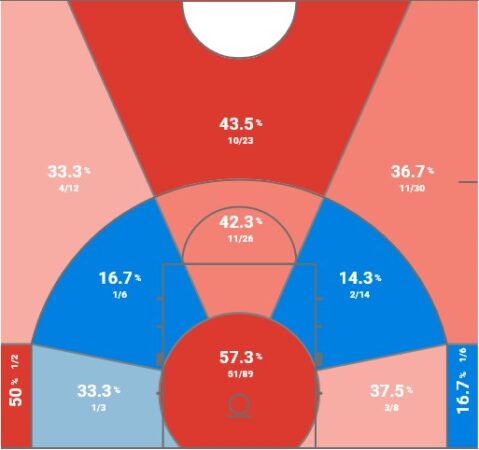 Mitchell is more than capable of tearing up the inside of this zone. The trick will be getting him the ball inside, as Syracuse has long arms and active hands and will try to prevent Mitchell getting the ball. Once Mitchell has the ball inside, there will be a good option available. He just has to find it. Priority would be a quick pass to Nathan, followed by a kick out to a shooter, with a Mitchell jumper as a pretty sweet last resort.

The Aztecs will definitely spend some time over the next few days adding in another set or two, but there isn’t enough time to install a new offense. So they will tweak things and add some little things that Syracuse hasn’t seen, but for the most part, this will be that plan.

Bball Breakdown has a really good video of Syracuse’s defense from a couple of years ago. Things have been tweaked since then, but to get a visual of what I described above, watch his video.

How will the Aztecs fare defensively?

The Aztecs 11th ranked defense will face off against the 22nd ranked offense of Syracuse. Syracuse has an Elite offense and knows how to score the ball. The Aztecs haven’t faced an offense this good all season. UCLA ranks 26th, but they were missing two starters. BYU ranks 28th.

The Aztecs’ defense is built around giving a lot of help, denying penetration, forcing perimeter shots, and contesting those perimeter shots. Only 10 teams force a greater ratio of three-point shots than the Aztecs do. It’s a style that works out well, as the Aztecs are elite inside the arc, and above-average outside the arc. Syracuse also struggles to get the ball to the rim, settling for jump shots quite often.

Interesting stat we discussed on the latest pod about SDSU:

The help the Aztecs bring also forces a lot of turnovers, which can be very helpful in terms of getting in transition to avoid the zone.

Syracuse is one of the best teams at taking care of the ball in the country. They can also score from most anywhere on the court. They aren’t elite scoring from any one spot, but they are above average from just about anywhere. Nathan Mensah will need to have a good game to deny shots at the rim and force their offense out.

Look for the Aztecs to throw defenders at Syracuse in waves, trying to frustrate them and tire them out with fresh legs constantly coming in. It will be more or less the same defensive game plan as usual, just against a tougher opponent.

Rebounding gets its own section to magnify its importance in this game. Syracuse is 14-0 in games where they win the rebounding margin. They are 2-9 in games where they lose or tie the margin—both Syracuse and SDSU average 35.9 rebounds a game. The Aztecs play fewer possessions, but also had an easier schedule, so it’s hard to say which team is better at rebounding overall.

#35 Buddy Boeheim- Boeheim is the player the offense is built around. He plays 36 minutes a game and averages 17 points on 42.5% shooting. He is a really good shooter from deep, connecting on 37.3% of his three-point shots. He plays as the two-guard in their lineup, so Trey Pulliam will likely guard him and will have his hands full. Boeheim Measures 6’6″, 195 lbs, and has a similar offensive skill set as Jordan Schakel, where he can score at a high clip from anywhere behind the arc. He’s not as physical, and doesn’t draw much contact, but he is an 88% free throw shooter when he does.

#1 Quincy Guerrier- Guerrier is the starting power forward for Syracuse. He is their best rebounder, and it’s not close. At 6’7″, 220 lbs, he’s not much of a floor spacer. He has shot 30.3% from behind the arc on only 66 attempts. He has a similar skill set as Abu Kigab from Boise St. He is athletic and disruptive, will block shots, and get his hands in the passing lanes. He’s also the most physical player on a roster that doesn’t have many of them. He provides energy and activity and can make those big momentum-changing plays.

#11 Joseph Girard- Girard is the starting Point Guard for the Orange. He’s 6’1″, 195 lbs. He is a bit of a wildcard. He’s not terribly efficient from anywhere on the court, and can shoot his team out of games. When he hits shots, though, his team generally wins (6-1 when he hits five field goals.) He is a solid facilitator for Syracuse, and does his job in the zone, but he isn’t a great defender. It will likely fall to Gomez to guard him to start possessions, although the Aztecs help and switch so much that it won’t all be on Gomez.

The Aztecs should win this one, especially if they play the way they did against Utah State. The 2-3 zone has a way of lulling teams into only taking three-point shots. Against Utah St., the Aztecs forced the ball inside and scored at the rim and in the midrange. Syracuse has been so focused on closing out on shooters that they’ve been leaving the rim open. The Aztecs also have enough ball movers to take advantage of defensive mistakes by Syracuse.

Defensively the Aztecs have a way of frustrating opponents and making them play inefficient basketball. They force turnovers and contest shots. Syracuse will still put up points, but not the way they’re used to.