It only took one full week of fall camp, including the first scrimmage, for the passion and exuberance of the players to lead to confrontations and minor scuffles.

“Part of getting guys back in the flow of things with pads on…really like the intensity that we’ve had and the guys are a little chippy with each other,” stated Coach Hoke in his opening statement following Monday’s practice.

In EVT’s article about this past Saturday’s scrimmage, Paul Garrison noted that tempers flared throughout the scrimmage including on one play where both William Dunkle and Keshawn Banks were sent off for a play due to extracurricular activities.

The sparks and chippiness continued at Monday’s practice.

During one-on-one pass blocking drills, Chance Bell was lined up to block Vai Kaho. Kaho, a sophomore linebacker, has been making a strong impression with players and coaches dating back to spring camp.

In the first rep between the two players, Bell and Kaho got tangled up and went to the ground together. Kaho took exception to something Bell either did or said as both players got up, shoved Bell and the two began jawing back and forth.

They had to be separated by a couple of players.

After the next set of players completed their drill, Kaho, still animated after the run-in, stepped back in for the drill out of turn and specifically asked for Bell to come back against him. With the onlooking players getting loud and hyped up, Bell won the drill by blocking Kaho for the full allotted time of the drill before Kaho could get close to the quarterback. The offensive players gave Kaho an ear full as he retreated to the defensive player’s side.

While acknowledging that the feistiness is “part of the game…and playing and having an edge to you,” coach Hoke stressed that the players need to keep a balance so that they do not cross the line and escalate it further than necessary. He does not think that any incident has crossed the line at fall camp because “there’s too much respect for each other.”

Kaho’s fiery attitude, love for the game, and good instincts are what have impressed the coaches most. Coach Hoke believes “he pushes the upperclassmen…and they feed off it.” 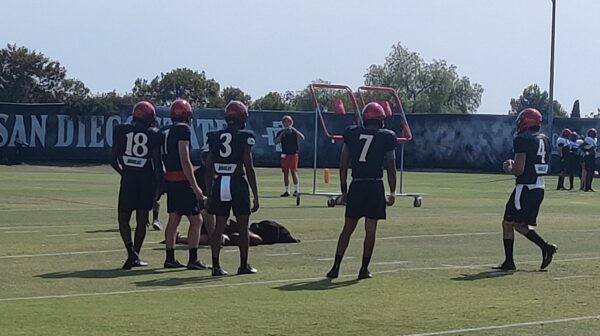 An Aztecs football update would not be complete if it did not involve a discussion regarding the quarterback competition. By all accounts up to this point, the leader in the clubhouse for starting quarterback seemed to be Lucas Johnson.

However, after the first scrimmage of fall camp, coach Hoke stated after today’s practice that the competition is “tightening up.” This is due to Jordon Brookshire starting “to make some hay…I like some of the things he did Saturday,” stated coach Hoke. In addition, Brookshire has become “more decisive and accurate” in fall camp.

During the practice, the coaches implemented two long drives to get both the offensive and defensive units acclimated prior to the second scrimmage. The quarterbacks who were called upon to lead those two drives: Jordan Brookshire and Jaylen Mayden.

Coach Hoke reiterated that Mayden is still in the mix and his greatest area of improvement since spring camp has been doing a better job of taking his reads, specifically on RPO’s.

When asked about Johnson’s progress, coach Hoke believed that while “he’s got pretty good mechanics…he’s an athletic guy and sometimes those guys don’t set their feet and their platform like you like to see them.”

We will find out after Sunday’s scrimmage whether coach Hoke’s comments were meant to spark all three quarterbacks to continue to compete during fall camp or if there is truly a new leader in the clubhouse.

The fourth quarterback on the depth chart is true freshman Will Haskell. Coach Hoke is asked about Haskell seemingly at every press conference and while he acknowledges that Haskell “does have some special talents,” he is probably not yet ready for primetime. That, however, will not stop Aztecs fans from getting overly excited about the prospects of Haskell next season and beyond.

While Haskell appears to be out of running for starter this season, he is receiving ample opportunities and reps in practice alongside the three players competing for the starting position.

He has also shown a willingness to take criticism and guidance from coaches and immediately incorporate them. During Monday’s practice, the quarterbacks took part in throwing end zone fade routes to receivers. On one throw, Haskell threw more of a line drive pass than a fade. Coach Hecklinski immediately asked him to get more air under the ball on the throws. Haskell’s next attempt was one of the best fade throws by any quarterback during the drill.

Based on how the players have lined up in practice/scrimmage during fall camp and coach Hoke’s comments following Monday’s practice, three of the five starters in the secondary are set.

The remaining two positions (warrior and cornerback) are still up for grabs. At warrior, Cedarious Barfield has received the most reps with the starting unit and has the leg up on that position. The cornerback 2 position has been a battle amongst four players: Dallas Branch, Noah Tumblin, Adonis Brown, and Noah Avinger. Branch is dinged up according to coach Hoke and did not practice on Monday.

While the first three are in their second or third years in the program, Avinger is a true freshman. Avinger, who received some snaps at cornerback with the first team during the scrimmage on Saturday, was praised by coach Hoke after Monday’s practice as a player who is “coming along.” Given his progress and Branch’s undisclosed injury, Avinger could be the only true freshman vying for legitimate playing time to start the season.

any thoughts on the Punter

Araiza will be doing the kicking and punting to start the season, but Browning has a strong and dependable leg. If Araiza struggles in one spot or it ends up being too much for one person to do all phases, Browning would be a suitable option.