The San Diego Padres weren’t good in 2016. Despite their best efforts, they weren’t even good in 2015 after a hectic off-season filled with trading by then new general manager, A.J. Preller. In fact, the Padres haven’t really been objectively good since 2010, their last winning season, and haven’t made a postseason appearance since way back in 2006.

Going into 2017, the Padres are once again not expected to be any good. In fact, it’s hard to see a scenario in which the team doesn’t finish the season at the bottom of the National League West. Despite significantly improved long-term prospects, it’s clear the Padres are still several years away from once again being considered a winner. The Padres farm system may once again be at least top 10 in all of baseball, but there will be several years before that fully pays dividends at the big league level.

However, Padres fans do have some things to look forward to in 2017. While the pitching staff seems to be guaranteed to be something of a dumpster fire, the big league roster still will have some bright spots.

The duo of Wil Myers and Yangervis Solarte seem poised to continue their respective breakouts and lead the Padres into the immediate and more long-term future. With both fresh off signing contract extensions, those two will be set to be the leaders of the next successful Padres team. In 2017, they will be the headliners of a mostly stars and scrubs roster, although the team may be short on stars, unless you consider either of those two “stars”.

Beyond Myers and Solarte, Padres fans will be counting on an infusion of new young talent, most notably Hunter Renfroe and Manuel Margot, as well as returning young talent, such as Austin Hedges, Travis Jankowski, Alex Dickerson, and Cory Spangenberg. On paper, that isn’t necessarily a good team for 2017, but it certainly is an intriguing one worth watching.

The pitching staff will probably be historically weak. The offense may not be much better. But the Padres do have something to hang their hats on. Something that benefited the team greatly in 2016. Base running.

Yes, I said base running. For as bad as the Padres were in 2016, they were the best in baseball in one important aspect: base running.

For the 2016 season, the San Diego Padres put up a team BsR of 24.8. For those uninitiated to the world of Fangraphs, BsR just stands for Base Running, and is Fangraphs’ base running statistic that encompasses a wide variety of different things including stolen bases, caught stealings, taking extra bases, being thrown out on the bases, etc.). For this statistic, as with many others over at Fangraphs, zero is considered league average while any number above zero means a team is that number of runs above average.

With the value of a win being placed at about 10 runs, for not only fWAR but this calculation and several others at Fangraphs as well, the Padres gained about two and a half wins on the base paths. For some comparison, that number was six and a half runs better than the second place Diamondbacks, good for over half a win earned on the base paths. At an individual level, the Padres certainly had their base running standouts. Listed below are all the Padres players who had at least 100 plate appearances, with their games played, plate appearances, stolen base totals, and BsR scores. 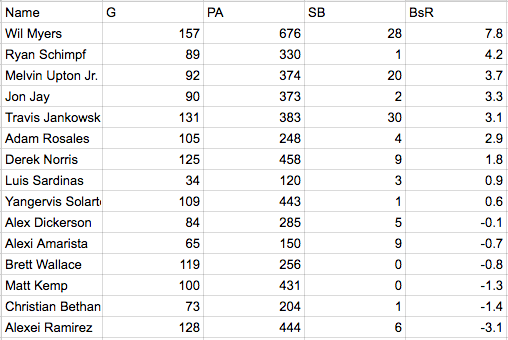 To have a reference point, the top three base runners in baseball by BsR are Billy Hamilton (12.8), Rajai Davis (10.0), and Mookie Betts (9.8). By that standard, Wil Myers was near the top of the leaderboard at 7.8 (Myers actually finished sixth in all of baseball). Beyond Myers, the Padres also got strong base running contributions from Ryan Schimpf, Adam Rosales, Jon Jay, Melvin Upton, Travis Jankowski, and Derek Norris. While not as strong, Luis Sardinas and Yangervis Solarte also saw significant playing time and maintained positive numbers on the base paths. In total, the Padres had more positive base runners than negative base runners among players meeting the 100 plate appearance threshold.

While the table above demonstrates the strength of the Padres’ 2016 numbers, it somewhat hides what those numbers should look like in 2017. First off, at least three of the six Padres on this list who recorded negative BsR scores won’t be playing for the Padres in 2017. Alexi Amarista, Matt Kemp, and Alexei Ramirez are all slated to play for other organizations in 2017. Of the other three, Alex Dickerson appears to be the only one to get significant playing time, with Brett Wallace signed to a minor league contract, and Christian Bethancourt attempting a conversion to reliever.

Although the Padres will lose some positive base running contributions from the likes of Melvin Upton, Jon Jay, Adam Rosales, and Derek Norris, those should be more than offset by the positive gains made by losing Amarista, Kemp, Ramirez, and others. In addition to these personnel swaps, the Padres should also get a full, or at least near full, season of at-bats from several players who should increase the Padres’ BsR numbers for 2017.

Three important names come to my mind when discussing players who should get more playing time for the Padres in 2017. Cory Spangenberg, Manuel Margot, and Hunter Renfroe were all strong base runners in limited major league playing time, putting up 1.4, 0.5, and 0.3 BsR in 53, 37, and 36 plate appearances. In 2017, all three should play much more, and collectively should be able to put up between 10–15 BsR between the three of them if they all play full, or near full, seasons. Replace Kemp and Upton with Margot and Renfroe and that is a net positive, and makes the Padres even more dangerous on the base paths in 2017.

It’s not too hard to envision a scenario in which the Padres find a way to top their 2016 BsR numbers. With Andy Green at the helm, and even more great base runners in the everyday lineup, the Padres should still be at the top of the league in base running. For a smaller market team needing every competitive advantage they can get, base running may be just the thing they need to get back to the playoffs. That still may be a few years away, but the Padres are clearly running the bases the right way.

** This piece was originally published at ROBaseball.com (Thoughtful Baseball. Explaining Why.)

Editorial and Prospect Writer for East Village Times. Twenty-five years young, Patrick has lived in San Diego for his entire life and has been a Padres fan nearly as long. Patrick lives for baseball and is always looking to learn new things about the game he loves through advanced stats.
Tags: Andy Green, Manuel Margot, Padres, San Diego Padres, Travis Jankowski, Wil Myers

Takeaways for SDSU from the Utah State series

Butler breaks out, but Aztecs lose 64-59 to Utah State