I checked in with their interest in sending Gleyber Torres our way and they respectfully declined. Still, I think this was a pretty good trade. Hand needs no introduction to Padres fans so I will jump right to the two Yankees we received.

Torreyes is a mighty mite at 5’8”, 151 pounds. I liked him for a few reasons. One, he can play almost any infield position. Two, he has major league experience as he has appeared in the big leagues each year from 2015-2017. He played in 108 games for the Yankees last season, 54 games at second base, 36 at short, and 26 at third base (a few times playing multiple spots in a game).

Lastly, he hits for contact. His strikeout percentage was 12.8% last season. Compare that to the other infielders the Padres had last year (Cory Spangenberg 26.3%, Carlos Asuaje 22.2%, Erick Aybar 15.4%, Jose Pirela 20.6%). Only Yangervis Solarte (11.9%) had a lower strikeout percentage than Torreyes. He had a .292 average last season for those who don’t appreciate the new metrics. He can help bridge the gap between now and Tatis/Urias 2019-2020 and either become a nice trade chip (he is under team control until 2022) or a piece to add depth and wisdom when the stud prospects mature.

If you were looking for a prized prospect in the Hand trade, look no further than Jorge Guzman. In a New York Yankees’ farm system that is, on some sites, ranked higher than the Padres’, Guzman was #9 in the organization’s Top 30 list. For reference, EVT has the Padres’ #9 prospect as Josh Naylor, with the nearest pitcher at #8 in Joey Lucchesi. With how similar the two systems are, that’s about the caliber of player we are getting here. Guzman finished 2017 with Short-A Staten Island. He’s got good size and a frame to grow into at 6’2”, 182 pounds.  His fastball has been clocked as high as 103 MPH. He has some control issues, but with the recent success of Padres pitching prospects, he could dial that in. He had a 2.30 ERA in 13 starts for Staten Island in 2017 with 88 strikeouts in 66 2/3 innings.

If Guzman doesn’t work out as a starter, with that kind of stuff, he could be a back-end bullpen guy in a year or two. He is developing a slider and changeup to go along with that electric fastball. I would compare him to the Mariners’ Edwin Diaz (who was also a starter in Seattle’s farm system before becoming their closer). 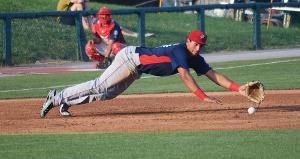 Sadly, we bid farewell to the heart and soul of the 2017 Padres. Solarte served San Diego well in his three and a half seasons with the Friars. Last year he set a career high in home runs with 18. He played all four infield positions for San Diego last season and his versatility and smile will be missed.

As sad as his departure may be, I managed to score two Nationals Top 30 prospects in the process. Third baseman Drew Ward has the tools to be a powerful bat. Ward ranks 18th in the Nationals’ system, which is generally seen as a middle-of-the-pack, average system (Bleacher Report has them at #13). He could sneak into the Padres’ Top 30. Ward just finished up a whole season at Double-A Harrisburg. At 6’3”, 215 pounds he can bring the lumber. He is constantly praised for his patience at the plate and the amount of walks he takes. His 11.5% walk rate last season would have led Padres starters. Of course, he has a bit to go to be major league-ready. Oddly enough, he also strikes out a ton. He also has an above-average throwing arm, which is nice to have at the hot corner. He could turn into a nice option at third base in 2019 if higher prospects fizzle out. The best comparison I could give Ward right now would be Maikel Franco of the Phillies.

Taylor Gushue could be an interesting get as well. We all know the Padres are banking on Austin Hedges being the catcher for the next 5 years at least. Gushue ranks 23rd among Nationals prospects, and is that coveted switch-hitting catcher. He too finished the season at Double-A Harrisburg, but he played most of the season with Single-A Advanced Potomac. In 91 games, he hit 18 home runs with a .327 on-base percentage. His walk rate was at a respectable 10.9%. He has some work to do defensively, but he should fit in nicely just a notch or two behind Hedges among catchers in the organization. His MLB comparison would be Stephen Vogt.

I thought about offering for Alicides Escobar, and even toyed with a deal for Aledmys Diaz, but I settled for getting Mercer. I am happy with it. Erlin has been up and down with the Friars for four seasons, but hasn’t really been able to stay healthy (Tommy John surgery in 2016). He certainly has some promise, and the Pirates are happy to get him. Yates was one of the more reliable relievers in 2017 for San Diego. He appeared in 61 games with a 3.72 ERA and a 112 ERA+.

In return, the Padres once again have a short-term solution at shortstop. I have higher hopes for Mercer than I did when we got Alexei Ramirez in 2016 and Erick Aybar last season. Mercer is not a young pup at 31. He’s been playing in the big leagues for six seasons, all with Pittsburgh. He is coming off of a career year as he hit a career-high 14 home runs with a .255 average. He only has one season batting below .255 since his rookie year. But you know what? That would be the best season by a Padres shortstop since Everth Cabrera.

Honestly, that’s all I want before the dynamic duo (we really need to come up with a nickname here) of Fernando Tatis Jr. and Luis Urias arrive. Mercer would be a free agent after this season (hence why I also acquired Torreyes in case we need to stall a bit longer). I like his veteran leadership. He has consistently played at least 145 games most of his career. He posted a 1.2 WAR last season and has been a positive WAR player every year of his career. Defensively, he is no Gold Glover, but he isn’t a liability either. In over 1,200 innings at shortstop last year, he had -1 Defensive Runs Saved (right about average and better than Aybar’s -4 mark). He’s just about everything you want in a short-term solution at shortstop. He was also slightly cheaper than the going rate for Alicides Escobar and much cheaper than Zack Cozart.

The infield was getting a bit crowded with the arrival of Mercer and Torreyes. Spangenberg is coming off of a career year (13 HR, 46 RBI, 1.4 oWAR). I wanted to cash in.

Blair comes from perhaps the only farm system that could out-gun the Padres, and that’s Atlanta (Bleacher Report has them at #1). Blair has been a part of that talented system since after the 2015 season when he was part of the Shelby Miller trade between Arizona and the Braves. When he was part of that trade, he was rated the #2 prospect in the Diamondbacks’ organization. Obviously, there are some high hopes and expectations for him. He’s had a bit of a rough start to his major league career (7.89 ERA in 16 MLB starts), but with the right coaching (which the Padres have), he is projected to be one of the better top-level farm pitchers in the organization. I would even give him a chance to break camp with the big league club in 2018. He’s officially no longer a rookie, but he would fit right in with some of the quality pitching prospects the Padres boast.

At 6’4”, 250 pounds, he can generate a lot of power and last longer as a starting pitcher. He went at least six innings in four starts in 2016 (he made 15). He has a nice slider to go with his mid-90s fastball. He also is developing a change and curveball. Major League hitters only bat .174 against his slider. He will be given a chance to compete for a rotation spot with the likes of Travis Wood, Colin Rea, and Luis Perdomo.

With all the transactions out of the way, it’s time to take a step back and look at the whole picture. Here is what the Opening Day roster would look like if I were filthy rich as the Padres’ General Manager:

At the beginning of this simulation, the Padres were at just under $54 million for payroll. Despite some free agent signings and additions to the MLB roster, I managed to keep the payroll at a tick below $60 million.

Other Notable Transactions from around the “league” during this simulation

I hope you had as much fun reading this as I did making it!

Native of Escondido, CA. Lived in San Diego area for 20 years. Padres fan since childhood (mid-90s). I have been writing since 2014. I currently live near Seattle, WA and am married to a Seattle sports girl. I wore #19 on my high school baseball team for Tony Gwynn. I am a stats and sports history nerd. I attended BYU on the Idaho campus. I also love Star Wars.
Tags: Brad Hand, Chris Tillman, Jordy Mercer, MLB, offseason, Padres, San Diego Padres, Shohei Ohtani, Yangervis Solarte
Pages: 1 2