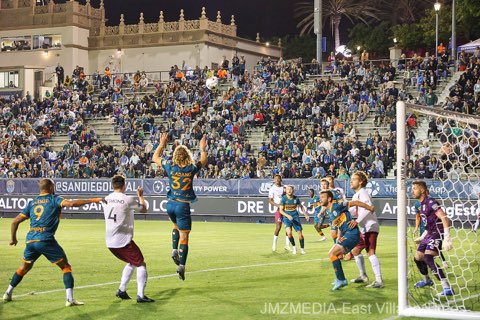 The San Diego Loyal (3-1) will look to continue their strongest start to any season this weekend as they face El Paso Locomotive (0-3).

The Loyal will face the Western Texas side in San Diego at Torero Stadium at 2 p.m. on Sunday, April 3. This will also be the first time both sides ever play each other.

The San Diego Loyal are looking to keep up their hot start to this season and are now coming up against a deflated El Paso side that could either provide an upset or a big confidence boost for the Loyal.

El Paso is coming off a narrow 5-4 loss to Las Vegas Lights FC. In a game for the ages, there was a red card, and eight of the nine goals came in 20 second-half minutes.

In another intense duel, the Loyal won their latest game, 3-2, against Phoenix Rising FC. Alejandro Guido — who was recently named to the USL Team of the Week — scored the game-winner for the Loyal in an emphatic fashion.

Currently, the Loyal and EL Paso are on opposite ends of the Western Conference standings. The Loyal sit in 2nd with nine points while El Paso sits last, in 13th place.

The Loyal have been playing beautiful football in the last few weeks.

They are currently tied for the league lead in goals at seven, alongside four other teams. The Loyal have also done an incredible job moving the ball forward and connecting their passes. The Loyal are currently third in total passes for the entire league and tied for second in passing accuracy at 83%.

In my last preview, I predicted a couple of lineup changes and got a few of them right, so why not give it another go.

Last game, I stated that Thomas Amang should’ve started against Tulsa and that he would likely start in Phoenix. He indeed started against Phoenix, and it resulted in three goals while he was on the pitch. So expect Thomas to get the start once more and if not, expect plenty of minutes off the bench unless the score gets out of hand.

Also, I predicted a Kyle Vassell goal, somewhat. What I said exactly is that if Vassell scored against Phoenix, it could trigger the attacking instinct in Vassell’s head and result in plenty more goals this season. Vassell indeed scored against Phoenix and played one of his best games of the season. So like Amang, expect to see Vassell in the starting lineup once again, and hopefully, he can score another and get a prolific scoring streak going.

There still haven’t been many updates on captain Charlie Adams who missed the last game with an injury, and Jack Metcalf, who came off early in the first half with an injury as well. So there’s a high chance we’ll see Collin Martin in Adams’ midfield spot and Nick Moon dropping back into Metcalf’s right-back role.

Morgan Prickett is currently studying Journalism at San Diego State and is on pace to graduate in 2023. He was born in Libreville, Gabon and lived in Pretoria, South Africa for 7 years until he moved to the Bay Area. He's a massive soccer and basketball fan; mainly supporting Arsenal of the English Premier League and any team Chris Paul is on. He's also an avid supporter of all sports teams in San Diego and loves watching all San Diego State sports.
Tags: San Diego Loyal, San Diego Sports

SD Loyal must finish May strong