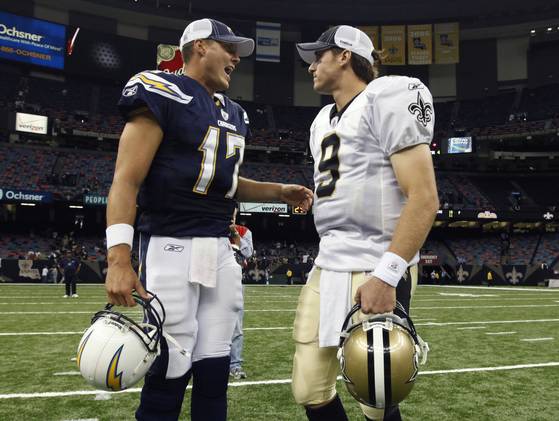 Drew Brees returns to San Diego to face the team that drafted him. It will be his first game in San Diego since suffering his, well documented, shoulder injury in 2005. It was Drew’s final season with the Chargers as the team decided to move on from him. Second year quarterback Philip Rivers was awarded the job as the season started in 2006. At the time like many fans, I was upset. Who was Philip Rivers? The most casual or most spirited fans still ask why the team made this move. Rivers was drafted in 2004, three years after Brees, and future hall of fame running back LaDainian Tomlinson in 2001.

The San Diego Chargers selected Tomlinson in the first round of the 2001 NFL Draft, as the fifth overall pick. The Chargers had the first pick and traded it to the Atlanta Falcons, who drafted Michael Vick. A trade that is arguably regarded as one the best in NFL history. All three players went on to have great careers. Brees injury took place on the final game of the 2005 season. Brees arm held out away from his body, as he walked off the field late in the game vs the Broncos. Brees was hit on his blind side causing the ball to be fumbled near the west end zone. Brees attempted to recover his fumble and was injured by a fellow teammate. Many may remember the saddened look on his face, as he was helped off the field. That would be the last time Brees stepped on the field at Qualcomm Stadium in uniform. He returns on Sunday.

As the cliché goes things happen for a reason. Drew Brees was signed by the New Orleans Saints after successful surgery by Dr. James Andrews. I remember it all like it was yesterday. The only other team that expressed interest was Miami. New Orleans had been hit by one of the worst hurricanes known as Katrina. In an almost a story book type fashion, the 2006 Saints were quite successful. In Drew Brees first year in New Orleans, the Saints reached the NFC Championship game. Four short years later the Saints were in the Super Bowl vs the Indianapolis Colts. Now several years later and several 5,000 yards passing seasons later, Brees is clearly on his way to Canton.

Now in 2016, the Saints find themselves 0-3 and sporting the 32nd ranked defense. Second-year cornerback P.J. Williams was placed on IR as the injury bug makes its way through the league. Bad defense or not San Diego has its own defensive issues. I don’t think the outcome has much to do with defense, as the signal callers at quarterback. For the third consecutive week, a Chargers starter was lost for the season. This time middle linebacker Manti Te’o. Jatavis Brown and Nick Dzubnar will more than likely platoon the middle for the time being.

QB Drew Brees will be out for blood and exploit any weakness San Diego shows. I see two areas of concern. The middle of the field and over the top at safety.

RB Mark Ingram is a very physical runner and is exactly the type of back that give San Diego fits. Gang tackling is the key to success. Stripping the ball could be effective as well.

Cooks, like Brees, lives in San Diego much of the year. Cooks is actually a good friend of Jason Verrett. He’s a smaller type wide receiver similar to T.Y. Hilton. Needless to say a blueprint for success is already in the works…yikes. Could be a matchup to really keep an eye on.

Snead has more size, but is an excellent receiver to compliment Cooks. He has already shown quite a flair for the dramatic. In fact this matchup concerns me very much, especially with a passer like Brees in the pocket.

Coby Fleener after several years in Indianapolis has an opportunity for a career renaissance with New Orleans. Traditionally San Diego struggles against tight ends. Yet another matchup that truly concerns me, this game will be a test for the defense. Despite New Orleans record, I believe this will be San Diego’s biggest test to date. I hope I am wrong.

Kenny Vaccaro & Jairus Byrd have 16 & 17 tackles respectively are big names and big talents presently not playing at a high level, but are no slouches. Neither player have interceptions currently and Rivers doesn’t need to be their first.

Ken Crawley is an undrafted corner that has played all three games, but I don’t suspect he’ll be a difference maker.

Cameron Jordan has 13 tackles, 1.5 sacks and isn’t playing at his normal level, but things could change rapidly. If he does turn it around let’s hope it’s a week later and not against the Bolts.

Paul Kruger is an ex-Raven & Brown who joins New Orleans, but like all the others mentioned isn’t doing much so far this season.

Nick Fairley and James Laurinaitis are notable names as well. The Saints have the players, but have failed to do much defensively.

Tyrell Williams time is now. Philip Rivers didn’t play his best game last week nor did Williams. This is the week to get on Sportscenter & NFL Network.

Travis Benjamin has the potential to go off in this contest as well. The Saints secondary will have to keep a man deep on him.

Melvin Gordon should have a good day. The Saints are having trouble stopping the run and that could be trouble for them.

Hunter Henry will be a factor. The rookie tight end was starting to have quite a day prior to his fumble ending the game in Indianapolis. More of the same for Henry, this is the game to get your name in the papers.

Philip Rivers is 0-2 against Drew Brees. Those games were in 2008 and 2012. Rivers squares off against Brees in San Diego for the first time. This will be a sky show in San Diego. If you have players on offense in fantasy football , I would definitely play them.

San Diego’s offensive line issues.  King Dunlap has suffered from concussions and will most likely miss this contest as well as tight end Antonio Gates.

The Chargers secondary specifically, has been clicking on all cylinders. With the exception of T.Y. Hilton‘s huge game against Jason Verrett. San Diego has been ball hawking.  The linebacking corps will be without Manti Te’o, but should have enough playmakers to keep the game in San Diego’s favor.

As I stated earlier, I don’t think this game will have as much to do with defense.  This is heavyweight fight between two very good quarterbacks. I would like to say the Chargers are going to win this contest, but fear the Saints pulling it out. I hope I’m wrong, either way expect plenty of fireworks Sunday!