On the field, the 2016 season hasn’t really gone the way the San Diego Padres front office had hoped. However, to their credit, they have made the right moves to put the team on the right track for the future. There may still be plenty of question marks left to be answered, but the team has gone a long way to answer at least some of the questions fans had going into the season.

Obviously things didn’t really go the way the San Diego Padres or Cory Spangenberg wanted them to. Spangenberg has played a grand total of 14 games on the year, seeing only 53 plate appearances in total. Spangenberg hasn’t been seen on the field for the Padres since April 19th, and given he was just transferred to the 60-day disabled list on Sunday, it’s looking increasingly likely that he will not play another inning for the Friars in 2016.

Now with the injury to Spangenberg, the Padres were left with a not so insignificant hole at second base, a hole which has been filled by the likes of Yangervis Solarte, Adam Rosales, Jemile Weeks, Alexi Amarista, and most recently Ryan Schimpf. While all those players had varying degrees of success at the position, Schimpf has most clearly has the greatest impact to this point. Schimpf is now even to the point where the second base job will likely be his for the remainder of the season given his performance over his first month and a half on the job to this point.

While Cory Spangenberg did have a stranglehold on the second base position prior to the start of this season, that position now looks to be Ryan Schimpf’s at least for the remainder of this year. Where this leaves the Padres in 2017 and beyond is an even bigger question.

I ran this poll on Twitter earlier on Sunday afternoon to really gauge how Padre fans see Schmipf at this point. 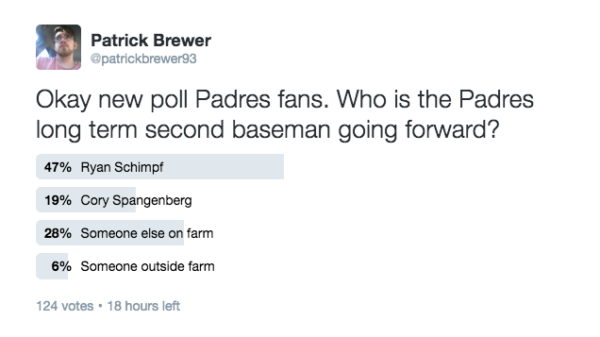 Based on this result, unscientific as it may be, Schimpf seems to be the preferred choice to be the Padres second baseman going forward. However, despite this vote, there is still a pretty significant portion of the fanbase who thinks either Cory Spangenberg or someone else entirely could be the guy going forward. That remains to be seen. There’s actually the same amount of people who think Schimpf should be the guy as there are that think either Spangenberg or someone else in the organization should be the second baseman of the future. But Ryan Schimpf has done a good job of making his presence known to this point.

Over his first 48 games and 177 plate appearances, Schimpf has impressed, slashing .219/.345/.562 with 12 home runs, a wRC+ of 140 and an fWAR of 1.4. Add to that the fact that Schimpf has been decent enough in the field and pretty good on the base paths, and it is easy to see why Padre fans have become a bit enamored with Schimpf through his first month and a half of big league playing time. Despite his impressive ascent to big league attention so far, Padre fans need to start tempering expectations a bit.

I probably don’t watch as many Padre games as the next guy, especially given the fact that I no longer have cable at home, but I have seen Ryan Schimpf play enough to know the kind of player he is. There’s obviously a lot of power there, but the strikeouts are there as well. The ability to drive in runners is also there, but batting average and on base percentage will never be his forte either. The baserunning is at least slightly better than average, but the defense has rated as passable if not below average to this point. There are obviously strengths there, but some cause for concern as well.

Through all the at bats I have seen of Schimpf and all the evaluations of his talent I have read, he reminds me way too much of a former Padres second baseman. I hate to say this because of the reaction this player elicits in San Diego, but Ryan Schimpf reminds me a lot of former much maligned Padre Jedd Gyorko.
I know what you’re thinking. “There’s no way Ryan Schimpf is like Jedd Gyorko” I get it’s a bit of a tough comparison to follow, but stay with me here.

While the numbers may not look too similar on the surface, the type of player Schimpf is is very similar to the type of player Jedd Gyorko is. The home runs are there, Gyorko hit 23 in his first full season in San Diego, but there isn’t much else in the offensive profile. Gyorko hit for a higher average than Schimpf initially, but later it fell into the lower twos for the remainder of his time in San Diego. Beyond that, neither player really impresses in the field, although both are more than respectable at the position to get by.

Now I have nothing against Ryan Schimpf as a player. I do have issue with fans having unrealistic expectations for a player who has only been in the major leagues for less than two months. More importantly, Schimpf also is just making his major league debut at the age of 28, which lends at least a little bit of attention to the flaws that are apparent in his game. At the end of the day, his first two months in the big leagues have been pretty fun to watch. But even so, fans should temper expectations. It remains to be seen who the Padres second baseman of the future is going to be. Schimpf could be that guy, but he may very well not be that guy as well.

Editorial and Prospect Writer for East Village Times. Twenty-five years young, Patrick has lived in San Diego for his entire life and has been a Padres fan nearly as long. Patrick lives for baseball and is always looking to learn new things about the game he loves through advanced stats.
Tags: A.J. Preller, Andy Green, Padres, Ryan Schimpf, San Diego Padres