Championships are rare in life. No matter the level, regardless of the circumstances, the opportunity to win a title hundreds of others are does not come around too often. Nearby James Madison earned the honor of winning the first SDSU Passing Tournament. With local powerhouse schools Lincoln, Helix, and Mater Dei, in the field, the odds of another local team joining Madison was high heading into this past weekend’s second passing tournament. Standing in their way were two out-of-city schools, Chandler High School from Arizona and Rancho Cucamonga from the Inland Empire.

The group of death for the pool play portion of the proceedings on Friday was Group #10. It consisted of Mater Dei, Lincoln, Chandler, and Rancho Cucamonga. Mater Dei won a state title last year and had multiple Division One athletes on its roster. Lincoln, fresh off a second-place finish the weekend before, was probably the most practiced of the group. Chandler was led by the top 2024-rated player in the nation in Ohio State QB commit Dylan Raiola. 2023 QB CJ Tiller, a Boise State commit, paced Rancho Cucamonga.

“Probably for recruiting purposes,” Rancho Cucamonga head coach Brian Hildebrand told EVT when asked why those teams were pitted against each other. “50-60 D1 recruits playing each other is a good eval for (the coaches in attendance).”

From an evaluative perspective, putting the top programs together makes a lot of sense. If the teams are as strong as anticipated, it gives coaches a couple of live looks at the top players against each other – once during pool play and another later in the tournament. It also guarantees that the top players compete against each other in the event of an upset in the tournament.

This weekend, the tactic worked both ways. Chandler did not meet the lofty expectations. They only won a pair of games. Raiola may be one of the top QBs in high school football, but he is only a rising junior. He was hesitant against some of the rising seniors, took too many “sacks,” and threw some crucial interceptions.

If SDSU had spread out the Group of Death, evaluators would not have seen Rahim Wright seal Rancho Cucamonga’s victory over Chandler with a pick-off of Raiola. Wright, a 2024 recruit, is making the transition from QB to safety. At SDSU’s passing camp, coaches saw he belonged on the same field with the top-rated 2024 QB.

Unlike Chandler, Mater Dei, Lincoln, and Rancho Cucamonga were as good as advertised. Each was among the final four teams on the winner’s side of the bracket. Rancho Cucamonga avenged the two losses from the day before by defeating Lincoln in the semifinals and Mater Dei 26-16 in the championship.

“SDSU was first class in everything they did,” Hildebrand said. “It was one of the best passing camps I have been around in terms of communication. …Competing in front of the coaching staff was great. Altogether, the city of San Diego is beautiful.  Coach Hoke was very gracious. Coach Sumler, the cornerback’s coach, he’s our area recruiter. He was nothing but helpful.” 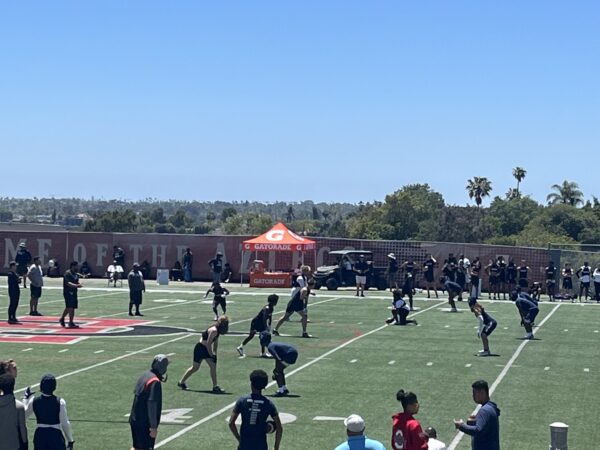 Defeating a pair of teams that only a day before had beaten them is difficult enough, but the Cougars overcame a lot of adversity to win the championship. A pair of their top players were on official visits to USC and UNLV, respectively. Their top WR only played in a couple of games due to lingering injuries. In their absence, Hildebrand and his staff learned they have an entire roster who can rise to the occasion in a game’s most stressful moment.

“The experience was amazing, a great step forward for our organization,” Rancho Cucamonga CB Kyren Condell told EVT. “The team bonding that came out of it was very positive. This says the potential our team has is unlimited because, without some of our key pieces, we still dominated with the remaining large group of talent on this team. This is just the start of something spectacular. We are a must-watch group of players for this upcoming season.”

From an SDSU recruiting perspective, several players on Rancho Cucamonga fit the Aztecs. Condell is chief among them. In May, the coaching staff offered the rising junior, who played for Damien High School a year ago. He possesses great size, flies to the football, and is a willing tackler. Condell’s potential is tremendous. With more coaching and experience, he could emerge as one of the top corners in California.

“I have been on SDSU’s campus before, a couple of weeks prior to this tournament, actually,” Cordell explained. “This weekend made a substantial impact (on his recruitment) because the culture the Aztecs have as a staff is progressive, and seeing the way they handled this whole weekend just shows me they are headed in the right direction.”

Two other players who stood out, according to Hildebrand, were a pair of 2024 receivers, Jason Harris and Nehemiah Harrison. Both players are listed at 5’9” and around 150 pounds. Throughout the tournament, they were used in a variety of roles. Hildebrand moved them around on offense. No matter where they were, the result was the same. The duo made plays.

That versatility is what could make SDSU and other college coaches covet their services. In the Aztecs’ RPO offense, they profile as an “H” wide receiver, which former SDSU walk-on turned scholarship player BJ Busbee started at last season.

Hildebrand also mentioned Amaurey Brooks among the players who helped themselves at SDSU’s passing camp. Brooks shows the embarrassment of riches Hildebrand possesses in his secondary. If Brooks can continue to elevate his game and Wright can make the transition to safety, the Cougars could have a Division One scholarship player at every position in the secondary.

There is no substitute for live competition. Chandler, Lincoln, Mater Dei, and the rest of the teams that participated in SDSU’s passing camp will be better for the experience. Only one, though, could walk away with the title. While it is certainly not their biggest goal, Rancho Cucamonga should savor it because, in life, championships are rare.

– Local cornerback Isaiah Buxton continues to impress. The Mater Dei junior had a pair of interceptions. One on each day of the tournament.

– 850 athletes competed in the Skills Camp held on Sunday. Social media is littered with the highlights.

– SDSU players were the counselors on Skills Camp. Working with high school athletes is a great way for the Aztecs to develop their leadership skills. For a player-run program, the experience is invaluable.

– Kudos to Ruben Pena, SDSU’s Director of Football Operations. It was the first camp he organized. Reviews of his job performance were outstanding.

– The events were the perfect way to showcase San Diego. With heat waves throughout the country, SD was paradise.

– All three events sold out. SDSU is looking to host more players next year.

– Ruben Pena is going to sit down with head coach Brady Hoke at some point this year to decide where next season’s festivities will take place. With Snapdragon Stadium opening in about two months, that facility could be used next year. Pena said he was on board with the idea. Time will tell if Hoke agrees or if any unforeseen scheduling conflicts or field maintenance prevents it.

– One of the logistic challenges of playing at SDSU Mission Valleys is that SDSU uses up to four fields during the camp. With only the main field inside of Snapdragon, the adjacent field might be enough for the competition.

– The River Park is expected to be completed at the end of 2023. Perhaps, a portion of that could be utilized as well.

My earliest sport's memory involve tailgating at the Murph, running down the circular exit ramps, and seeing the Padres, Chargers and Aztecs play. As a second generation Aztec, I am passionate about all things SDSU. Other interests include raising my four children, being a great husband and teaching high school.
Tags: Aztecs, CJ Tiller, Dylan Raiola, Isaiah Buxton, Kyren Cordell, Rancho Cucamonga, SDSU Passing Camp