The Padres were borderline unwatchable in 2016. With the team in the middle of a rebuild, the Padres big league roster lacked much big time talent to entertain fans. Given that rebuild, it’s natural for fans, and the baseball world in general, to focus more on the Padres’ minor league system. Padres fans used that to find hope for the future, while baseball writers and pundits used it to find something worth talking about.

And something worth talking about is what they found.

With that kind of turnaround, and the kind of talent the Padres have in the farm, there’s always going to be players that go overlooked or get lost in the shuffle. While the Padres have no shortage of potential impact talent, such as Manuel Margot, Hunter Renfroe, Anderson Espinoza, Cal Quantrill, and the Padres slew of teenage international talent, there are plenty of other interesting names that may slip through the cracks. Given how deep the Padres’ farm system is, you have to work your way down quite a bit until you get to #18 on the Padres top-30 list according to MLB Pipeline.

Obviously it’s hard for most people to genuinely get excited about a 23-year-old relief prospect. But Maton is definitely worth getting excited about, regardless of age or current position.

Originally drafted in the 20th round of the 2015 MLB draft, Maton has very quickly moved through the Padres’ organization, dominating at nearly every level. Although Maton led Conference USA in strikeouts as a senior at Louisiana Tech, the Padres immediately transitioned Maton to a relief role. And the results were astounding. 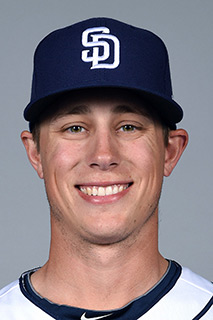 Over his first 32 2/3 innings in professional ball to close out 2015, Maton was electric, giving up only five earned runs and walking only five while striking out an amazing 58 batters, good for over 16 strikeouts per nine innings! At least in the short-term, it appeared the Padres move paid off handsomely.

Going into 2016, the Padres hoped for more of the same from Maton. And they weren’t disappointed. After starting the season in Low-A, Maton made a stop at High-A before skipping Double-A, hitting Triple-A, and finishing his season pitching in the Arizona Fall League. In total, Maton threw just shy of 60 innings, striking out 84 batters and walking only 10. Maton gave up only nine earned runs during the season, although he did struggle slightly in the AZL, giving up four earned runs during his 10 plus innings.

Not only does Maton miss bats with a mid-90s fastball, but his fastball has a great deal of life inside the zone, as the pitch has a high spin rate and deceptive action to it. Maton also operates with an above average cutter that he also uses to miss bats, although that pitch lacks the movement and deception of the fastball. Most importantly of all, Maton has a great feel for the strike zone, with a very well-developed command of all his pitches. Striking out over 10 batters per nine innings while walking less than two is certainly a recipe for bullpen success, and it’s a recipe that Maton has mastered to this point.

So far, Maton has impressed this spring, striking out seven batters and giving up only one hit and two walks in five scoreless innings to this point, including a three-strikeout, scoreless inning on Monday afternoon. Maton survived the Monday round of roster cuts, and he should get more time to prove his worth to the Padres for 2017 and beyond.

With Opening Day right around the corner, it’s hard to imagine what else Maton has to prove. If he can continue to pitch the way he did in 2016, this time mastering Triple-A, it’s hard to see how the hard throwing righty won’t be in San Diego at some point in 2017. While the Margots and Renfroes of the world get all the attention, players like Maton are also necessary, and perhaps just as valuable. In 2017, Maton hopes to further make that statement.

Editorial and Prospect Writer for East Village Times. Twenty-five years young, Patrick has lived in San Diego for his entire life and has been a Padres fan nearly as long. Patrick lives for baseball and is always looking to learn new things about the game he loves through advanced stats.
Tags: Maton Padres, Padres, Padres Relief Pitchers, Phil Maton, San Diego Padres