To start this new year off, it seemed as if all the San Diego Wave were keen on announcing were new signings.

Don’t get me wrong, the signings are all much needed for this freshly formed side, but there’s something else that many fans have been wanting to hear for much, much longer.

A week after the commencement of training camp on Tuesday, Feb. 1, the Wave finally released their schedule for the 2022 Challenge Cup. The Wave will be opening up their inaugural season with a matchup against Angel City FC at Cal State Fullerton on Saturday, March 19.

We’re here. Writing the story of Wave FC on our first day of training camp. 🌊🌊🌊 pic.twitter.com/uaQTwwT6jK

San Diego then continues to play the Portland Thorn and O.L Reign. The Wave will play each team a total of twice from March 19 to April 23, as all four teams have been selected for the tournament’s West Division.

Here’s how this year’s Challenge Cup will work: Each of the NWSL’s 12 teams will be divided into three regional groups, with each division made up of four teams. The East Division, the Central Division, and the West Division containing Angel City FC, OL Reign, Portland Thorns FC, and San Diego Wave FC.

Whether the Wave will play any further games in the Challenge Cup solely depends on which position they find themselves at the end of all the West Division matches. Four teams will progress to the semi-finals of this year’s tournament after the group stage and so on until the final set for Saturday, May 7.

Currently, we’ve been given little to no information on how this Wave side will look towards the commencement of the Challenge Cup. Head coach Casey Stoney has understandably held her cards as close to her chest as possible to prevent any other teams from getting the chance to prepare for what this Wave side is going to produce.

Luckily, that’s what I’m here for. I’m going to break down a couple of formations and line-ups that I could see the Wave open the Challenge Cup with based on my research and inside sourcing. 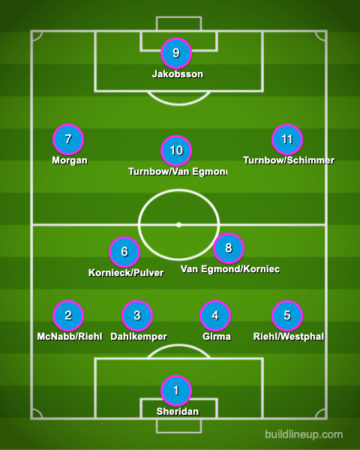 This is the first of two very similar formations I will be going over. The 4-2-3-1 is a formation that coach Casey Stoney is known to be very fond of. In her last season, while coaching Manchester United, Stoney used this formation multiple times, especially against the teams that we’re better at possessing the ball.

Stoney is a huge fan of stretching the pitch wide. She likes for her wingers to have great technical ability, speed, and the ability to take the defender 1-on-1. While she may not have the world-class wingers at her disposal, such as USWNT players Tobin Heath and Christen Press back in Manchester, Stoney does have some promising pace and experience that could make up the front three.

They’re technically midfielders in this formation, so we’ll call them attackers because that’s their primary role. My guess is we’ll most likely see a trio of Alex Morgan, Sofia Jakobsson, and Kelsey Turnbow. Morgan or Jakobsson will likely grab the center-forward position but don’t be surprised if you see Stoney shift the whole front line around as she gives each of her attackers a chance to showcase their skills in each position. Jakobsson and Turnbow also have the capability to drop back into the center-attacking-midfielder role, which could allow for some more playing time for the other attacking options. Those options are Jodie Taylor, Marleen Schimmer, Katie Johnson, Makenzy Doniak, Bella Briede, and Amira Ali.

Now onto the midfield, consisting of two center-midfielders and one center-attacking-midfielder. It’s important that your midfielders work well together and compliment each other. For this reason, barring more potential midfield signings, I think Taylor Kornieck and Emily Van Egmond will start side-by-side in the deeper-lying center-midfield roles. The two already have a little bit of chemistry after both being traded from the Orlando Pride and are arguably the most experienced in those positions.

I also believe there’s a possibility that Van Egmond could play the center-attacking-midfielder position with her natural goal-scoring and providing prowess. This leaves Stoney with the young midfielders Mia Gyau, Sydney Pulver, Marleen Schimmer, or even Kelsey Turnbow or Naomi Girma to be placed in one of the remaining midfield positions left by the two Orlando Pride signings.

“We’ve signed Van Egmond and Kornieck who are two fantastic midfielders,” Stoney said about her midfield options. “I’ve been pleasantly surprised by Syndey Pulver and her ability. I think we’re going to be surprised by some of these younger players coming out of the draft. Kelsey Turnbow can play as a 10 or as a forward, Marleen Schimmer can play as a 10 or a wide player, and Kristen Mcnabb can play as a 6. We’ve got adaptable players here that can play in many positions which you have to have.”

The last but maybe the most important aspect of Casey Stoney’s master plan is the defense. As a defender herself, Stoney knows how important it is for a team to have a dependable protection. Most would assume that No.1 overall pick in the 2022 NWSL draft Naomi Girma should get the starting center-back role next to veteran Abby Dehlkamper, although Kristen Mcnabb could get the start over Girma to begin the season. At the fullback positions, it is likely we’ll see Kristen McNabb, Kaleigh Riehl, or Christen Westphal. There will also be plenty of opportunities for other defenders such as ​​Tegan McGrady, Mia Gyau, Kayla Bruster, Megan Reid, Taylor Hansen to make an appearance.

At the goalkeeper spot, it’s most likely that Kailen Sheridan will get the nod at No.1 over veteran Carly Telford. But what’s for certain is that we’ll see each of them on the pitch at some point of the season.

“We signed Kalien as the No.1,” Stoney said. “That was one of our main targets. Her ability to play out from the back, distribution, and the saves she makes. But we’re also very aware that we might not always have availability. We’ve had honest conversations with both goalkeepers and both will get playing time through different points of the season.” 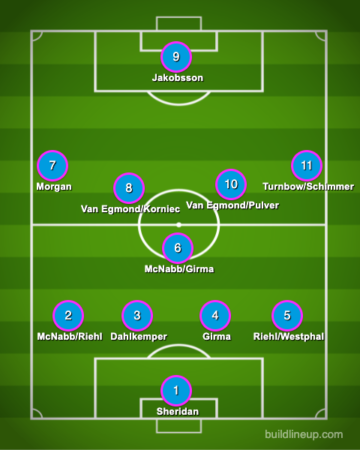 This formation isn’t very different from the 4-2-3-1. The only change is that one of the deep-lying midfielders comes up and helps to facilitate the offense while the single midfielder drops further back for a more defensive role.

This formation would most likely be deployed in games Stoney expects to win. This formation allows for much more creativity on offense but comes at a risk to the stability of the defense. A dominant center-defensive midfielder is what makes this formation click. I could see either Taylor Kornieck or Emily Van Egmond playing the role, but it’s also very likely that Stoney would go with a more defensive-minded player such as Kristen McNabb, Mia Gyau, or even Naomi Girma.

The rest of the team should run quite similar to the 4-2-3-1. The only offensive difference could be that the wingers may get pushed wider and higher up, with the two center-midfielders controlling the tempo of the game.

Of the two formations, I believe there’s a better chance we’ll see the 4-2-3-1 being put to action. Stoney is known for having tricks up her sleeve though, so we can only speculate what this team will look like until the official lineup is released ahead of the Challenge Cup season-opener against Angel City FC on Saturday, March 19.

Morgan Prickett is currently studying Journalism at San Diego State and is on pace to graduate in 2023. He was born in Libreville, Gabon and lived in Pretoria, South Africa for 7 years until he moved to the Bay Area. He's a massive soccer and basketball fan; mainly supporting Arsenal of the English Premier League and any team Chris Paul is on. He's also an avid supporter of all sports teams in San Diego and loves watching all San Diego State sports.
Tags: San Diego Sports, San Diego Wave, SD Wave

Kyle Vassell is lighting the fuse in San Diego