The San Diego Padres took another series win from the San Francisco Giants, and this time it was on the road.

I don’t like to say “I told you so,” but I called this outcome in my series preview.

I said that if the Padres starters could keep games close into the fifth and sixth innings, the offense and bullpen would pick them up and the team could win two out of three games of the set. The Padres did indeed take two games out of three and Padres fans enjoyed a fun weekend of baseball viewing.

There were some solid pitching matchups as well as some dramatic big swings. Friday’s game was a close loss for the Friars, Saturday’s was major blowout in their favor, and Sunday’s game provided some extra-innings drama capped with a big Padres victory.

Let’s take a look at how things played out:

In game one of the three game set, the Padres sent Luis Perdomo to the hill to square off against Jeff Samardzija and the Giants. Perdomo got off to a rough start, giving up two runs (one unearned) in the first inning, but was able to settle down and go six innings, giving up only one earned run on six hits, with five strikeouts. Samardzija went seven innings, giving up two earned runs on four hits, with five strikeouts. In the fifth inning, Yangervis Solarte got on base on a hit by pitch. Ryan Schimpf followed that up with a two run blast off of Samardzija, rolling his recent power surge into the weekend. Cory Spangenberg then tripled and Austin Hedges drove him in with an RBI single. The Padres took a 3-2 lead.

In the bottom half of the inning, Brandon Belt hit a double, then took third on a wild pitch, and then scored on a sac fly hit by Michael Morse. The score was tied at 3-3 until the eighth inning when Padres’ reliever Ryan Buchter gave up a solo shot to rookie Christian Arroyo. The Giants would hold onto the lead to win the game. 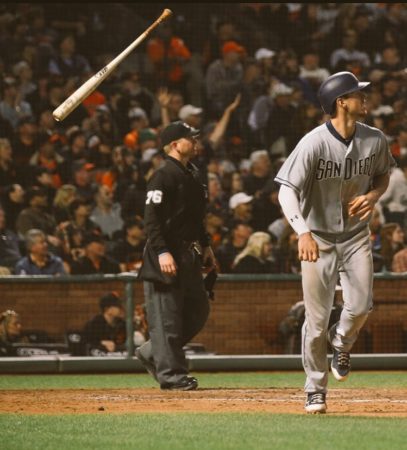 Game two turned out to be a windfall for the Friars. Jhoulys Chacin was given the start for the Padres opposing Matt Cain for the Giants. Chacin gave up three runs on five hits, with six strikeouts in five innings. Cain countered by giving up only one run on six hits, with seven strikeouts in five innings, giving the Giants a 3-1 lead going into the sixth. Both pitchers came through with solid outings. It wasn’t until the sixth inning that the wheels fell off the wagon for the Giants. To start the inning, Giants’ reliever, Chris Stratton, gave up a single to Wil Myers that sparked an offensive onslaught for the Padres, including hits for Schimpf, Austin Hedges, and Manuel Margot. The half-inning was capped off with a three-run blast by Myers on his second at bat of the inning. The Padres scored eight runs in the sixth inning, making the score 9-3.

Miguel Diaz took the hill for the Padres in the sixth inning and gave up a run. The Padres brought in Jose Torres to relieve Diaz, and he pitched a scoreless 1 ⅓ innings. Allen Cordoba stayed in the game after coming in to pinch run in the sixth and crushed a three-run homer in the seventh inning, bringing the Padres lead up to 12-4. Craig Stammen pitched two scoreless innings for the Padres in the eighth and ninth. The Padres scored 11 runs total against the Giants’ bullpen on the game. Schimpf kept his offensive surge trending upward by going 2 for 4 with a double, an RBI, and drawing a walk.

Clayton Richard took the hill for the Padres, opposing Ty Blach for the Giants in the series’ rubber match on Sunday. Both pitchers performed well. Richard gave up two earned runs on six hits, with three strikeouts in 5.1 innings. Blach did not give up an earned run on three hits, with one strikeout in seven innings. The Giants took a 2-0 lead into the ninth inning, but lost it at the hands of Padres’ pinch hitter, Hector Sanchez, who launched a dramatic two run blast to tie the game up at 2-2. Both team’s bullpens kept the score tied until the 12th when Myers launched a monster three run blast off of Giants’ reliever George Kontos, making the score 5-3. Jose Torres was able to close out the game for the Padres in the bottom of the 12th. The Padres won 5-3.

Anytime the Friars can stick it to the Giants, is a good time. This series was refreshing to say the least, as well as a good indicator of the heart that this young club possesses. There were some serious positives to glean from the series including, but not limited to: a continuation of Schimpf’s offensive incline, Jose Torres with some solid outings on the mound, Wil Myers’ clutch performances, solid Hector Sanchez at bats as a pinch hitter, and the all-around progress of Allen Cordoba.

The Padres come home for a three-game set against the Colorado Rockies starting Tuesday night.

Baseball is the second most beautiful art form in my opinion. The first is what God does with our San Diego sunsets. Football's pretty exquisite too. I'm Sarah's husband and a Cal alum. I have been a Padres fan since childhood. My first experiences were at the Q watching Tony and the crew in the 90's. I love sports and I love San Diego. I hope you enjoy my thoughts!
Tags: Hector Sanchez, Padres, Padres Vs Giants, Ryan Schimpf, San Diego Padres, San Diego Padres vs San Francisco Giants, Wil Myers