Major League Baseball has stepped up and done something really special for the city of San Diego and for the fans of the Padres. In the future any player that wins the National League batting title will win the Tony Gwynn Award.

Yes the award will now be named in the honor of our beloved San Diego Padres outfielder. For his eight batting titles and endless passion for the game he was recognized by major league baseball. This is a tremendous honor for the long time Padres right fielder. He was a 15-time All-Star and it cannot be expressed enough how well-loved he was among his peers.

Upon hearing the announcement I was initially brought to tears. Seeing his family on the field in San Diego at the All-Star Game immediately brought tons of memories of the man. I had met Tony several times at autograph signings and such. Each time was an absolute joy.

He did some work for a company that employed myself and I had the opportunity a couple of times to pick his brain a little bit as we sat next to each other for a few hours. On our last encounter he actually remembered my name. I can recall being floored by the fact he remembered my first name. You don’t see that often. You just don’t. That is who he was though. He went out of his way to make you feel comfortable. He was a gentleman. Tony was a class-act.

I like to think Tony saw the passion I had for the sport. I told him about how I have played adult baseball every Sunday for the past 15 years. I asked his advice about pulling the ball and hand placement on the bat. He graciously answered any and all questions I had and often asked me something just so he could hear my response. I could tell he was testing me. He wanted to know what my approach was at the plate when I step in the box. He was particularly fascinated in whether or not I changed my approach in different counts. This was a man talking to me, not even close to being a professional, about hitting. He just saw my passion and realized I really did want to get better with my swing.

Mr. Gwynn asked me this question… ” Second time around the lineup seeing the same pitcher who struck you out on three pitches… what do you do first pitch?” I paused for a second and I asked him what the score of the game was. He smirked and replied “It’s a tie game”. I then asked what were the three pitches he struck me out on? He laughed like only Tony could and said… “That right there is the key, what were the pitches and how are you going to react to them?” He was communicating to me that the game is about adjustments. You have to be aware of every situation and know yourself. The man had an approach at the plate like none other and he had no trouble telling you his craft if you took the time to listen. 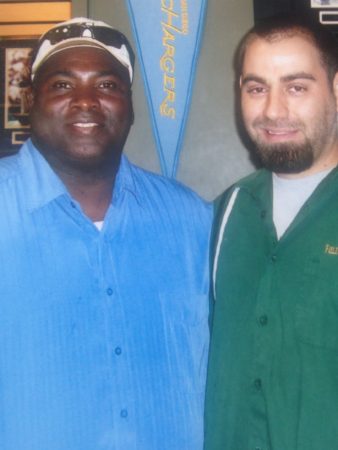 I will always remember Tony for his smile and that twinkle in his eyes. That sparkle, that glow in his face every time he talked about the sport he loved. When he spoke about the craft of hitting and how he tried so hard to master it… I listened. The funny thing is I  barely knew Tony Gwynn. He was all but an acquaintance to me. If even that. When I think of the many people he touched more directly than me, it makes me smile. The man was a person of the people and we all hold his memory tightly within us. A lot of us has similar stories about the man.

This new award ensures that Tony Gwynn will be remembered for a long time. Years down the road, when all that played with him are gone, he will be remembered. Fathers will explain to their sons who Tony Gwynn was and the type of player he was. That is a fantastic thing. His legacy will live on. His name will be known by far more than just San Diego Padres fans and that is just fitting. The man spent his entire playing career in anonymity and was constantly over looked because he failed to demand praise. Now after his departure he receives the high-praise that he truly deserved all along.

I am so ecstatic by this new award and the recognition of one of the greatest persons in the history of the game. He meant so much to many and was an unselfish person that always took time for the kids. Tony Gwynn was the face of the San Diego Padres for nearly 20 years. He will always be Mr. Padre and there will never be anyone like him. Knowing that his skill we forever be immortalized by the sport he loved so dearly is an absolute pleasure. Somewhere #19 is looking down on us all with that classic smile and giving us all one last belly laugh. This honor would be humbling to him and that is why we loved him. The man was great, but never saw himself in that manner. He represented who we all wanted to be. He was well-loved and greatly respected and I will forever remember my few times with this man. A tip of the cap to you sir. I miss you. I’m still having trouble with my top hand. I could use your help.