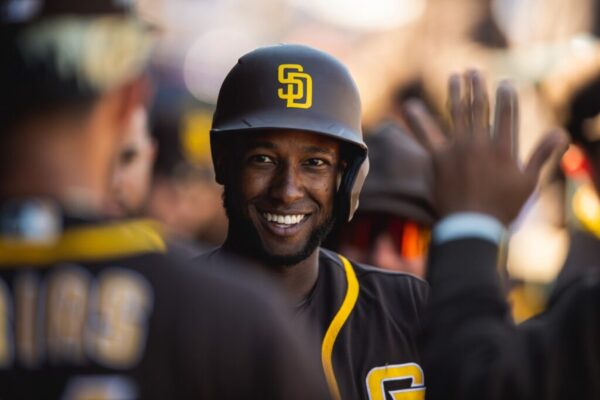 A look into the San Diego Padres’ outfield problem for the coming season.

The only functioning left fielder on the San Diego Padres is Jurickson Profar.

Profar is objectively a great person, but with a 0.0 WAR in 2021, he doesn’t project well as a competent starting corner outfielder for a team that should be competing for the World Series.

At best, Profar is a replacement level bat with positional flexibility and an infectious smile. The Curacao native is a big clubhouse personality and is labeled as an exemplary teammate. The Adam Frazier experiment didn’t work out, and after Frazier’s dump to Seattle, the Padres were tasked with finding a replacement.

Although Profar is a beloved teammate, there are some questions about his production on the diamond. He only has one full season with a wRC+ over 100 and will cost San Diego approximately $7.3 million this coming season. It’s a hefty price tag for a replacement bat, who is, unfortunately, the current starting left fielder. While Profar doesn’t make sense as the only left fielder on the roster, he is still an amazing asset and would be best utilized on the bench.

Profar could play the fourth outfielder position and is capable of backing up a certain ground ball-prone veteran at first base. Remember, it was Profar who caught the final out in Joe Musgrove’s legendary no-hitter in 2021.

The current starting left fielder is a vital player on the roster. However, Profar would be the most useful to the Padres as a utility man, sitting on the bench as a pinch hitter or a defensive replacement. Wil Myers will likely start the season in right field. With that being said, San Diego needs to find a starting left fielder for 2022, with Profar being cemented on the bench.

Before looking at possible options for a corner outfielder elsewhere around the league and in free agency, let’s first explore the Padres farm system and comb through the ‘hot talent lava’ within its minor league pipeline.

Jorge Oña, the Padres 27th ranked prospect according to MLB.com, is a ‘sleeper’ prospect according to some fans. Oña is known for his power swing, but not much else. Making his debut in 2020, he has three hits in 12 at-bats in his major league career. A possible designated hitter, Oña does have a major league home run to his name and has already drawn comparisons to Padre legend Franmil ‘La Mole’ Reyes. Currently, in Triple-A El Paso, Oña is finishing rehabbing a right elbow inflammation injury that kept him out of 2021.

The issue with left field for the San Diego Padres isn’t about prospect capital but rather timing. There is a myriad of possibilities for their future, including recent draft picks James Wood and Joshua Mears. Corey Rosier acquired from the Seattle Mariners for Adam Frazier is also an option. However, none are more highly-regarded than top prospect Robert Hassell III. ‘Bobby Barrels’ will hopefully be ready by 2023 at the earliest. So the issue still remains with the 2022 roster.

A.J. Preller scooped up yet another underperforming former Texas Ranger in Nomar Mazara, who will hope to fight his way to a roster spot. The issue is, Mazara has never had a season with a higher OPS+ than 100. Not the type of stat you’d like to see from a starting outfielder. Of course, this is all depending on the lockout and what will happen in 2022 regarding a universal DH.

Taking a look at the possible free agents, one thing needs to be made clear. The market is exponentially rising for MLB free agents, meaning agents will milk every last penny out of the owners for their clients. The worst thing is giving out a major contract for a player that is expected to regress. San Diego is already hovering around the luxury tax threshold, so they need to be really conscious of their spending.

Former Cincinnati Red Nick Castellanos is coming off a career year, which for him is really good timing right before payday. After his 3.2 WAR season, he is most likely looking for a deal worth at least $20 million per year. The Padres cannot afford him, and regression is certainly on the table for a player with eight years of service time and a WAR/162G of 1.8. For example, Wil Myers, who has been constantly put in trade talks for his entire Padre career, has a WAR/162G of 2.0. Castellanos is a contract the Padres might look back on as an overpay, and thus not someone to lock down long term.

Another option is to bring back Tommy Pham.

Pham has a very appealing walk rate, as he finished 2021 in the 95th percentile, but there were some clubhouse issues with Pham. Earlier in the 2021 MLB season, he got heated after a collision with Ha-Seong Kim and erupted in the dugout. Pham has talent. He just never clicked with the rest of A.J. Preller’s roster.

Kyle Schwarber and Seiya Suzuki are intriguing options, yet there is a high probability that the Padres will be outbid for these two. The Padres have a very talented roster and really only need a reliable starting fielder to eat innings at the ‘seven.’

The free agent that is possibly under the radar of other clubs is veteran Corey Dickerson, who split time in Miami and Toronto last season. Not only does he have a higher WAR/162G than both Schwarber and Castellanos, but Dickerson will be significantly cheaper. Dickerson struggled to find a long-term home since 2018 but still wants to prove himself. He has proven reliable if given the starting time on the field, with a career OPS+ of 116. Not necessarily the flashiest player on the globe, but Dickerson is an available and effective role player that is relatively cheap, which is honestly all the Padres need to succeed given the current market.