Last week we looked at where Manuel Margot ranks among N.L. center fielders.

Let’s take a look at Eric Hosmer and where he stands among National League first basemen, as we head into the 2018 regular season. The N.L. certainly has some talented first basemen and now we must include Hosmer on that list. Like the Margot piece, we will look at the offensive and defensive side of the first base position based on 2017 statistics and 2018 FanGraphs ZiPS projections.

First base is typically an offense-first position, as some of the games’ biggest sluggers in history like Mark McGwire, Jim Thome and Albert Pujols played first. Let’s take a look at the 15 National League first basemen and see where they rank against each other.

Eric Hosmer has had his three best offensive seasons in the last three years. He averaged 23 home runs, 97 RBI, a .294 average and 119 OPS+. If the Padres can get that kind of season out of Hosmer at the plate, he was worth the biggest contract of the offseason and in team history. Hosmer likely won’t shatter the world with home run power, in fact, it’s likely Wil Myers will hit more dingers this season. It’s his consistency and clutch hitting that sets him apart, as he hit .333 with runners in scoring position last season and has had three straight years over 100 OPS+.

Hosmer will certainly get some stiff competition in the National League, which looks to be the superior of the two leagues when it comes to first base talent.

At the top of the list, there is one man who stands alone and it is the Reds’ Joey Votto. He has been one of the most consistent hitters of this generation. He just knows how to get on base, with at least 110 walks in four seasons in the last seven years. He has led the National League in on-base percentage six different times and last year, he had a resurgence of power with 36 home runs, his best total since his MVP season of 2010. He has also had four seasons of at least a 1.000 OPS. He is the class of the hitting first basemen. He is projected to be much of the same this season.

Votto is not the only first baseman who knows how to get on base. Freddie Freeman had an OBP of .403 last season for Atlanta. He was having an MVP-type season 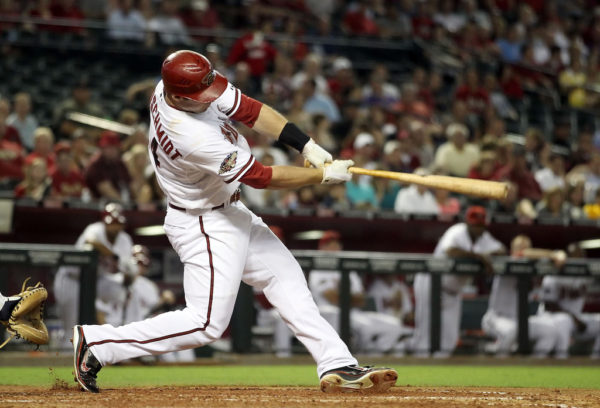 before he had to miss a big chunk of games due to injury. He still managed an astronomical 157 OPS+. He is projected to be neck-and-neck with Votto as the top hitting first baseman in the N.L.

Cody Bellinger, in just one year for the Dodgers, has asserted himself as one of the best sluggers in the game. Now, he will have to prove he is above the infamous sophomore slump. The 2017 N.L. Rookie of the Year hit 39 home runs with a 142 OPS+.

Arizona’s Paul Goldschmidt is one of the most criminally undervalued players in the league. Despite two seasons of 36 home runs and 120+ RBI while hovering around .300 he has never won N.L. MVP. He has won three Silver Sluggers along with five All-Star nods. He also has three straight years of at least a .404 OBP.

Former Padre Anthony Rizzo has certainly made a name for himself in Chicago. He has had four straight seasons of at least 31 home runs and a 132 OPS+. Justin Bour, Carlos Santana, Eric Thames and Ryan Zimmerman all have 30-homer power.

Clearly, Hosmer doesn’t have elite power some of these guys listed above possess. He ranked 10th out of 15 in home runs but he actually had the second-best average in the group last season. Hosmer is projected to take a slight dip but still remain solid.

Here are how the rankings shake out taking into account 2017 numbers with 2018 projections.

Eric Hosmer has won four Gold Gloves, all in the past five years. No one can take that away from him, even if the metrics might not agree with some of his accolades. Defensive metrics are tricky creatures. It cannot be ignored that Hosmer is tied for the most Gold Gloves of any first baseman in the National League with Adrian Gonzalez, but Hosmer is certainly in his prime and Gonzalez is not. Hosmer also has a very solid career .995 fielding percentage at first. Let’s take these into consideration as we rank these first basemen by their handiwork with their gloves.

Brandon Belt had the highest Ultimate Zone Rating (UZR) of any first baseman in the N.L. last season at 7.6. Joey Votto and Carlos Santana are not far behind. Anthony Rizzo and Paul Goldschmidt have four Gold Glove between them. Rockies projected first baseman Ryan McMahon is projected to be swift with the glove. It’s tough to get a good gauge on Cody Bellinger after one season, in which he played 46 games in the outfield and just 93 at first.

Defense at first base is hard to be measured, no stat is perfect. They don’t have a statistic for picks on low throws in the dirt or quick tags on a pickoff. Playing first base is more than having good range and a strong arm. Here are the rankings for defense, based on some metrics and a sprinkle of my own judgement.

These rankings may be more of a testament to how deep the first base class is in the National League. Hosmer, who seems to rank right around the middle here in N.L., was considered one of the best American League first basemen. This is not an indictment on Hosmer, who is a fine first baseman, this just may mean he will have some intense competition to make the All-Star team. Hosmer is a top-ten caliber first baseman. If he continues to perform as he has the past few years, the Padres spent wisely.

Native of Escondido, CA. Lived in San Diego area for 20 years. Padres fan since childhood (mid-90s). I have been writing since 2014. I currently live near Seattle, WA and am married to a Seattle sports girl. I wore #19 on my high school baseball team for Tony Gwynn. I am a stats and sports history nerd. I attended BYU on the Idaho campus. I also love Star Wars.
Tags: Anthony Rizzo, Eric Hosmer, First Base, Freddie Freeman, Gold Glove, Joey Votto, MLB, Padres, Paul Goldschmidt

7 thoughts on “NL Position Rankings: Where Does Padres 1B Eric Hosmer Sit?”