The 2018 season has been one of growing pains for the San Diego Padres. Currently sitting at 44-70 at the beginning of August, the big league team has more or less lost the attention of the average baseball fan. Sure, there are plenty of us who still suffer through for the love of the team and the game, but the Padres’ 2018 season is well past being sunk.

Despite the season being a lost cause, there are still plenty of storylines worth watching over the last two months of the 2018 season. At the top of that list for me, personally, is the development of Austin Hedges. With Francisco Mejia now a member of the organization, Hedges is facing his first real challenge to holding the starting catcher position in both the short and long term. With Hedges still struggling to find consistency, calls for Mejia are growing ever louder with each passing day.

The same criticisms have followed Austin Hedges since his first days in the minor leagues. Even prior to the 2011 MLB Draft, there were lots of scouts raving about Hedges’ defensive ability while simultaneously questioning his long-term offensive profile. Over the first seven years of his professional baseball career, Hedges has maintained his stellar glove-first ability while continuing to bring doubts with his offense. There have been many starts and stops along the way, but those questions still remain.

In his first full season behind the plate in San Diego in 2017, Hedges once again disappointed with a .214/.262/.398 and 71 wRC+ in 120 games. The defense was still as stellar as always, but there were once again real doubts about whether Hedges could hit enough to be an everyday catcher. Going into 2018, it was unclear whether Hedges would provide any offensive value at all. Prior to an injury in late April, Hedges slashed .188/.246/.281 with a 47 wRC+ to kick off the season. Same old story. Lingering elbow issues kept Hedges off the big league roster until his return in late June after missing nearly two months of action.

Since June 24, Hedges has looked like an entirely different hitter. I know we all have heard this story a few times before, but this time it looks real. Over 103 plate appearances in those 28 games since returning, Hedges has slashed .298/.350/.543 with a .245 ISO and 135 wRC+. The obvious stats back up Hedges’ success, but the underlying numbers tell the more important story. 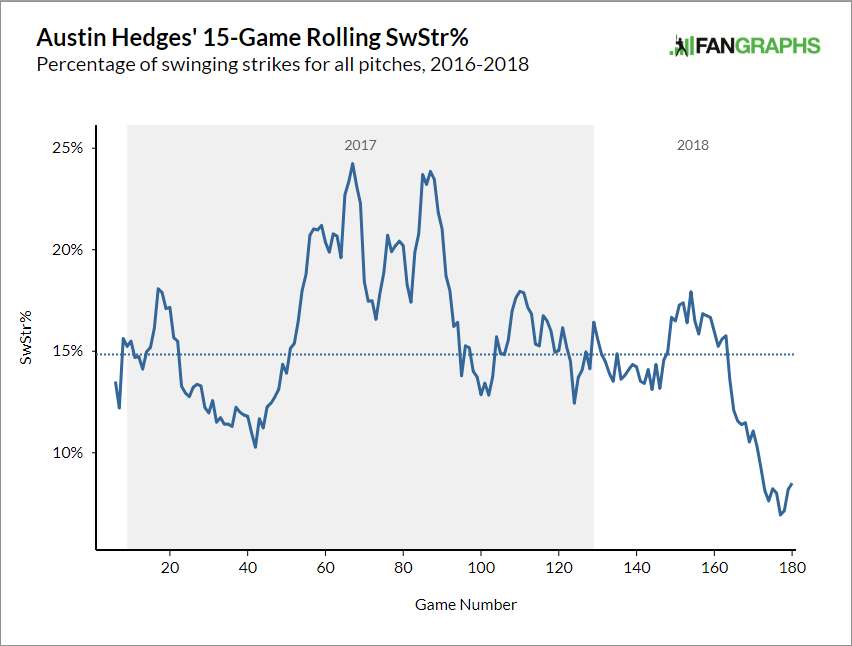 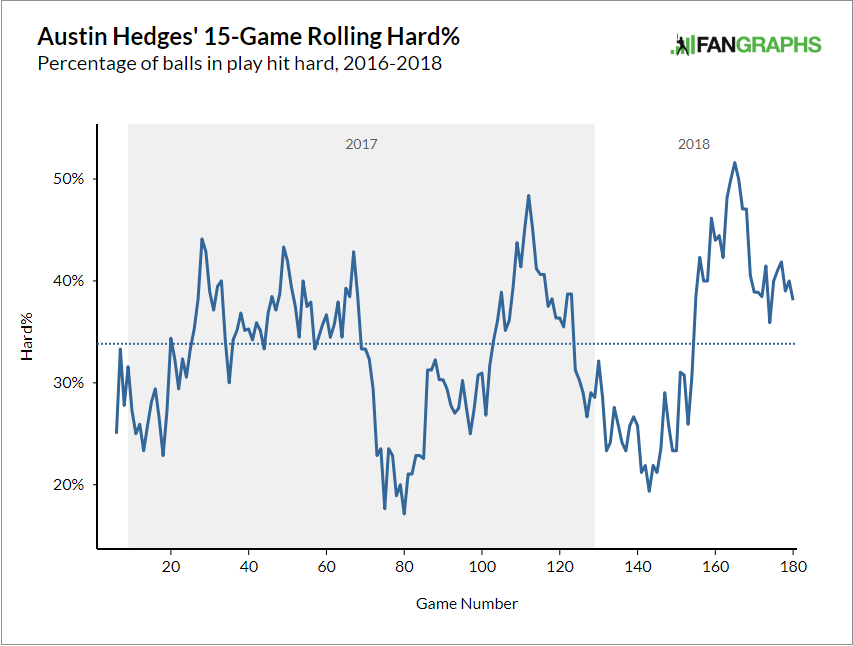 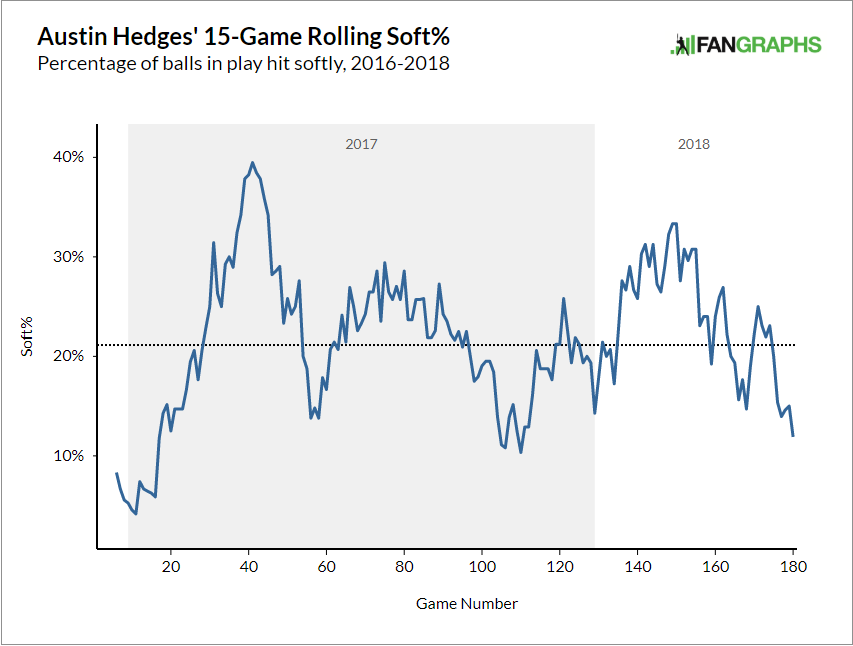 This final improvement has been more subtle, but Hedges has also seen a consistent increase in his walk rate at the plate which is a logical extension of his improved patience at the plate. 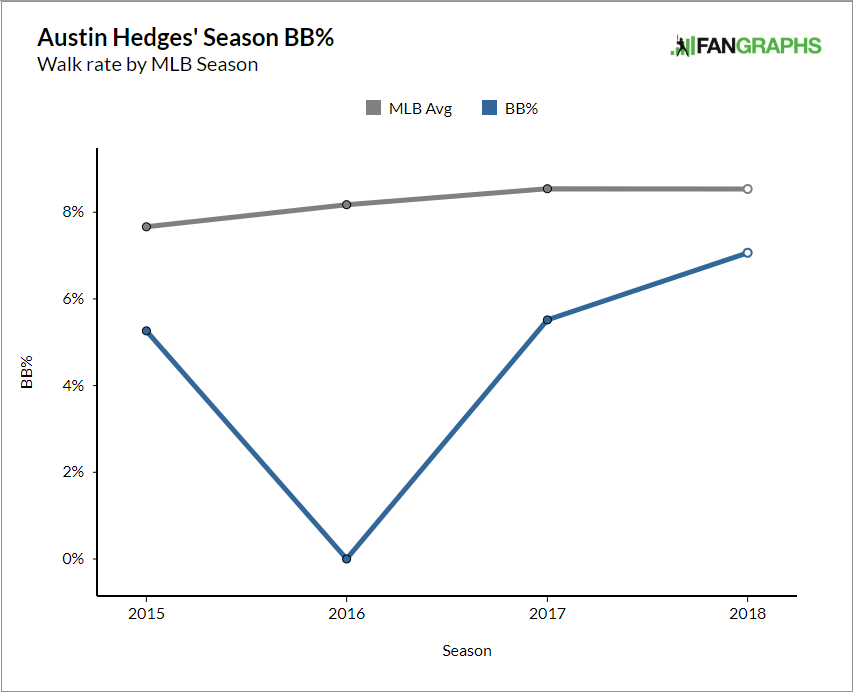 As seen by Hedges’ radial chart below, he has made a lot more consistent and solid contact since his return in late June. Since that return, Hedges has hit 38 out of 69 batted balls over 90 mph. Hitting the ball hard doesn’t always translate to success, but Hedges has a wOBA over .700 on those balls. Increased hard contact has paid big dividends for Hedges in the last month-plus. 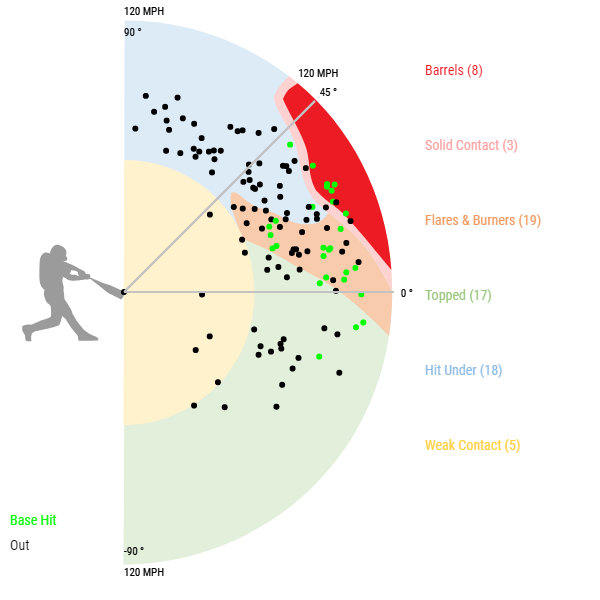 There’s no guarantee that Hedges is a changed player at the plate, but this might be the most encouraging point of his big league career. Hedges might never hit as much as Francisco Mejia could, but Hedges may just hit enough to hold off Mejia, at least for a little longer. Having two big league-caliber catchers is a good problem to have, and with Hedges’ recent offensive success, the Padres may have just that sort of problem on their hands.

10 thoughts on “Maybe This Austin Hedges Hot Streak is Different”